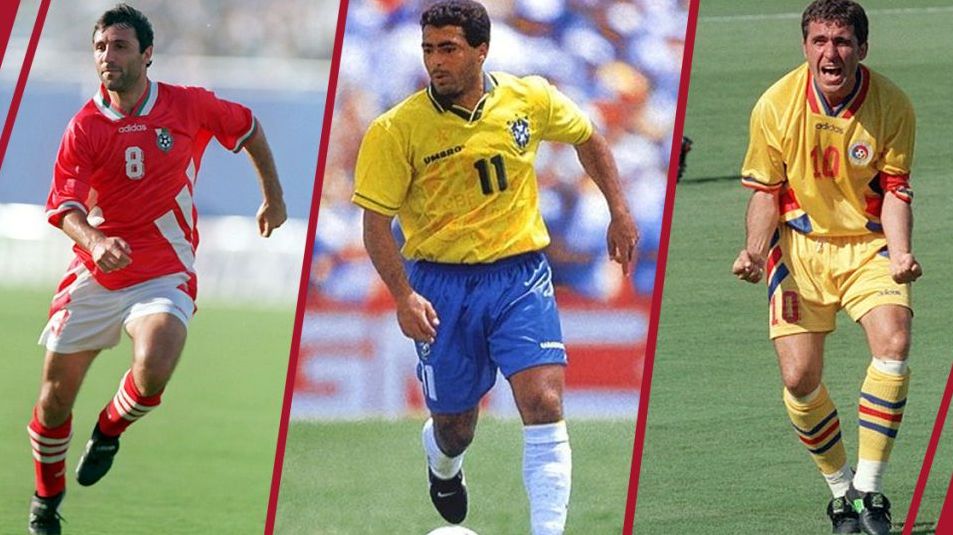 Most Valuable Players of the 1994 FIFA World Cup

USA 1994. The World Cup that shocked the world, not in terms of upset results but by the number of people who flocked to the stadiums to see the games. With an average attendance of 69,000 spectators per game, the 1994 World Cup is still the most attended World Cup in history.

The presence of such huge numbers also helped the top performers at the World Cup to enter the realm of football (or should we say soccer) greatness. Here’s our list of the top MVPs from the 1994 World Cup.

We start things off with the man who was officially the best player at the World Cup. For his efforts in leading Brazil to their fourth World Cup title, Romario received the World Cup Golden Ball.

The Barcelona forward scored five goals in the entire tournament, just one short of the tally required to win the Golden Boot. He partnered Bebeto up front, and the duo found the net a combined eight times for the same.

Romario’s goals came in each of the group stage games, followed by in the Quarter-Finals against Netherlands and the game-winning header against Sweden.

Brazil’s talisman also held his nerve to convert his penalty in the tight final against Italy. Overall, there was no better player than Romario at the 1994 World Cup.

The most enduring image of the 1994 World Cup is Roberto Baggio with his head down in despair after missing his penalty, which gave Brazil the cup. That, however, should not be the moment to judge the Italian’s 1994 campaign.

Baggio too had five goals at the tournament despite having a rough start. The Italian maestro remained scoreless in the group stages but turned up his performances in the knockout stages.

Baggio sparked a great comeback for Italy in the Round of 16 matchup against Nigeria. Italy were down to 10-men and were trailing 0-1. With two minutes left on the clock, Baggio scored from the edge of the box. He then converted a penalty in extra time to seal Italy’s progression.

Goals in the quarters and semi-finals also helped Baggio solidify his status as one of the world’s best players at the time. In the final, Baggio was not fully fit and it showed as he was not at his influential best. Unfortunately, his messed penalty became the defining moment for him at the World Cup.

Salenko’s was a bit strange as Russia bowed out in the group stages and five of his goals came in a single match against Cameroon.

Stoichkov, on the other hand, powered Bulgaria to the semi-finals of the 1994 World Cup, with his goals paving the way. The FC Barcelona star scored thrice in the group stages and then found the net three times in the knockout stages.

Stoichkov’s finest performance came in quarter-final against Germany where the Bulgarians registered a shock win. The forward’s peach of a free-kick levelled the score after Germany took the lead. A Yordan Letchkov striked in the 78th minute guaranteed Bulgaria’s appearance in the semi-final, where they to Italy, in spite of Stoickhov getting on the score-sheet.

Romania’s standing in world football hasn’t been much in history. In 1994 however, the European nation shot to prominence with a quarter-finals appearance at the World Cup. Most of it was to do with the Maradona of the Carpathians, Gheorghe Hagi.

Having played for Real Madrid for two years, Hagi was a known quantity in Europe. Known for his terrific dribbling and advanced playmaking style as well as a fiery temper.

Hagi’s superlative performances propelled Romania to an unprecedented quarter-finals appearance in 1994. His first goal at the tournament is considered one of the finest in World Cup history, as the Romanian lobbed the ball over the keeper from 40 yards out.

Hagi’s best moment in the tournament came when Romania upset Argentina in the quarter-finals. The midfielder was resplendent in the game and finished a wonderful team move where he got on to the end of Ilie Dumitrescu to put it past Luis Islas.

Where Romario represented Joga Bonito or the beautiful game of Brazil, Dunga was the complete opposite.

Where Bebeto, Romario and Leonardo toyed with the opposition, Dunga did the unglamorous job of holding his midfield’s shape.

Dunga’s playing style is the furthest you can think of when looking at a Brazilian footballer. Unlike his compatriots, Dunga relied on a rough and physical style that complemented his superb positioning and tactical awareness.

Playing in central midfield, the Brazilian captain was one of the best defensive players of the tournament as he marshalled Brazil’s back line. He took over captaincy from Rai and led the team to their fourth World Cup triumph.

A testament to his defensive ability was that Brazil only conceded three goals in the entire tournament. Quite frankly, an amazing record.

Not only that, his performances and assuredness in the middle of the park gave the more creative players, the freedom to experiment with their play.