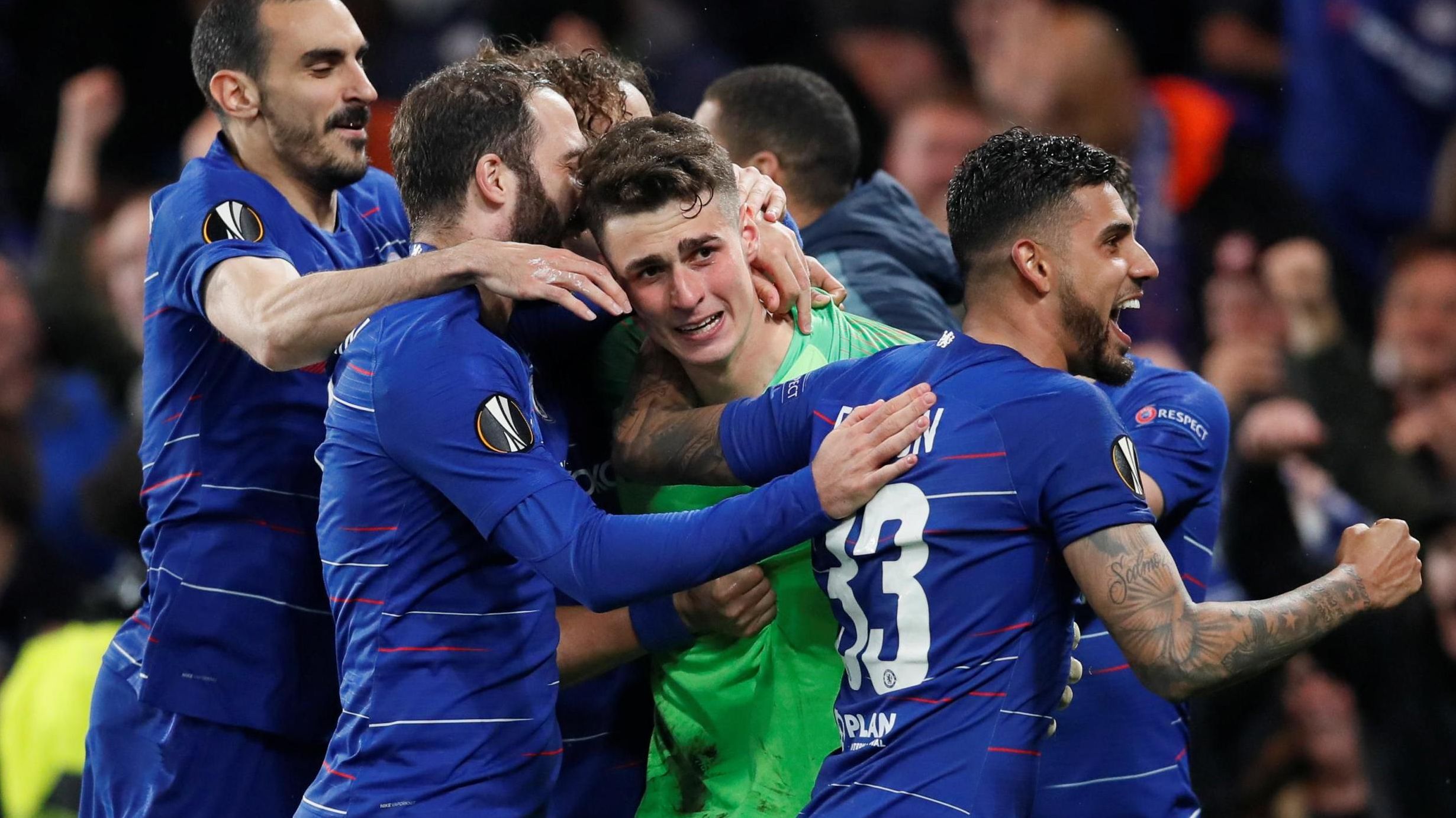 Chelsea edge past Eintracht Frankfurt and qualify for the UEL final

Eden Hazard scored the winning penalty for Chelsea to beat Eintracht Frankfurt 4-3 in their Europa League semi-final shootout on Thursday and become the fourth English side to reach a European final this season.

They will meet London club Arsenal in the Azerbaijan capital city of Baku on May 29.

A lively semi-final had finished 1-1 after the sides produced the same scoreline in Frankfurt a week ago and it was fitting that Hazard, Chelsea's gifted midfielder, should win the match with what could be his final kick at Stamford Bridge.

The Belgian is expected to leave Chelsea at the end of the season after seven seasons in London, with Real Madrid in pursuit of his silky skills.

Chelsea goalkeeper Kepa Arrizabalaga was another hero on the night, saving penalties from Martin Hinteregger and Goncalo Paciencia in the shootout in which Chelsea captain Cesar Azpilicueta also had his shot stopped.

Chelsea had looked in charge half an hour into the game when Hazard dodged and shimmied round the Frankfurt defence on the left flank before pushing a perfectly-weighted pass into the path of Ruben Loftus-Cheek. The England midfielder rolled the ball into net at the far post in the 28th minute.

But three minutes after the break Luka Jovic split the Chelsea defence, playing a neat one-two with Mijat Gacinovic before shooting past the stranded Arrizabalaga to level the scores.

The visitors had the psychological advantage and pressed 2013 Europa League winners Chelsea, with Jovic, Ante Rebic and Danny da Costa a constant threat as the German team sought a potentially decisive second away goal.

At the other end, Olivier Giroud, Willian and substitute Davide Zappacosta squandered chances for the home side in a frantic and error-strewn last 20 minutes of normal time.

In extra time, Luiz and Zappacosta were forced into desperate clearances off the line from substitute Sebastien Haller as Ross Barkley and Gonzalo Higuain, on for Giroud, had chances for Chelsea.

The English side had the ball in the net after 115 minutes and Azpilicueta wheeled away in celebration but the goal was ruled out for a foul on keeper Kevin Trapp.

The shootout was played out in front of the noisy German fans and it was Azpilicueta who felt the pressure first, his shot comfortably saved by Kevin Trapp.

But Arrizabalaga took control, saving Hinteregger's penalty with his feet and pushing aside Paciencia's.

Chelsea coach Maurizio Sarri said the players were exhausted after a long season.

“I think we played a very good first half and then we got into trouble after the break. We conceded a goal in 10 minutes of panic,” the Italian said.

“We were better in the last part of the match but we were tired in extra time and it was difficult.”