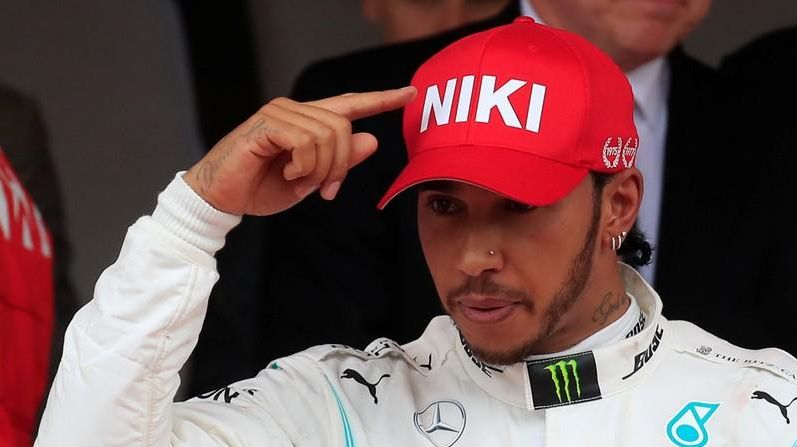 Sporting a helmet styled in the same design as Niki Lauda’s in his final championship winning season for McLaren in 1984, Lewis Hamilton delivered the win in Monaco he so dearly wanted to honour his friend.

A victory ground out though tense, nerve-racking effort, of sweat and seat-of-the-pants determination, it is surely one Lauda would have admired and acknowledged as thoroughly deserved.

Hamilton had been emotional after taking pole and was once more moved to dedicate his win to Lauda as he celebrated with relief as much as ecstasy, that included hurling himself into the swimming pool at the harbour’s edge.

He described it as his hardest race and, while it was certainly not the most thrilling, he had to remain inch-perfect and fully focused from flag to finish.

Grinding out a win on the wrong tyres, despite being harassed by Max Verstappen to the end, was exactly the sort of dogged indefatigability that Lauda displayed and had admired in Hamilton.

He took the win from pole in front of Ferrari’s Sebastian Vettel in second and his teammate, Valtteri Bottas, in third. Red Bull’s Verstappen was in fourth after finishing second on track, harrying Hamilton to the flag.

But he had incurred a five-second penalty for an unsafe pit release and that demoted him. The win gives Hamilton a 17-point lead over Bottas in the championship and puts him 55 points clear of Vettel.

Lauda won twice in Monaco and his qualifying lap here in 1975 was so intense he said he was left trembling at its conclusion. Hamilton endured a similarly tense encounter.

He has not enjoyed the greatest success on the streets of Monte Carlo. This is his 77th career win but only his third here, where he lives and where, after these efforts, he will have slept particularly soundly.

Verstappen, who drove superbly, was ceaselessly probing on rubber with more grip. He made a final dramatic lunge at the Nouvelle chicane with two laps to go and the pair touched as the Dutchman darted up the inside but could not snatch the lead. Investigated, it was judged a racing incident.

Hamilton held his nerve and the lead. Pierre Gasly was in fifth for Red Bull and he took fastest lap. Carlos Sainz in the McLaren did very well for sixth, Daniil Kvyat in the Toro Rosso was in seventh, with another strong finish for the British-Thai driver Alexander Albon in eighth for Toro Rosso.

Daniel Ricciardo was in ninth for Renault and Grosjean was in tenth for Haas.