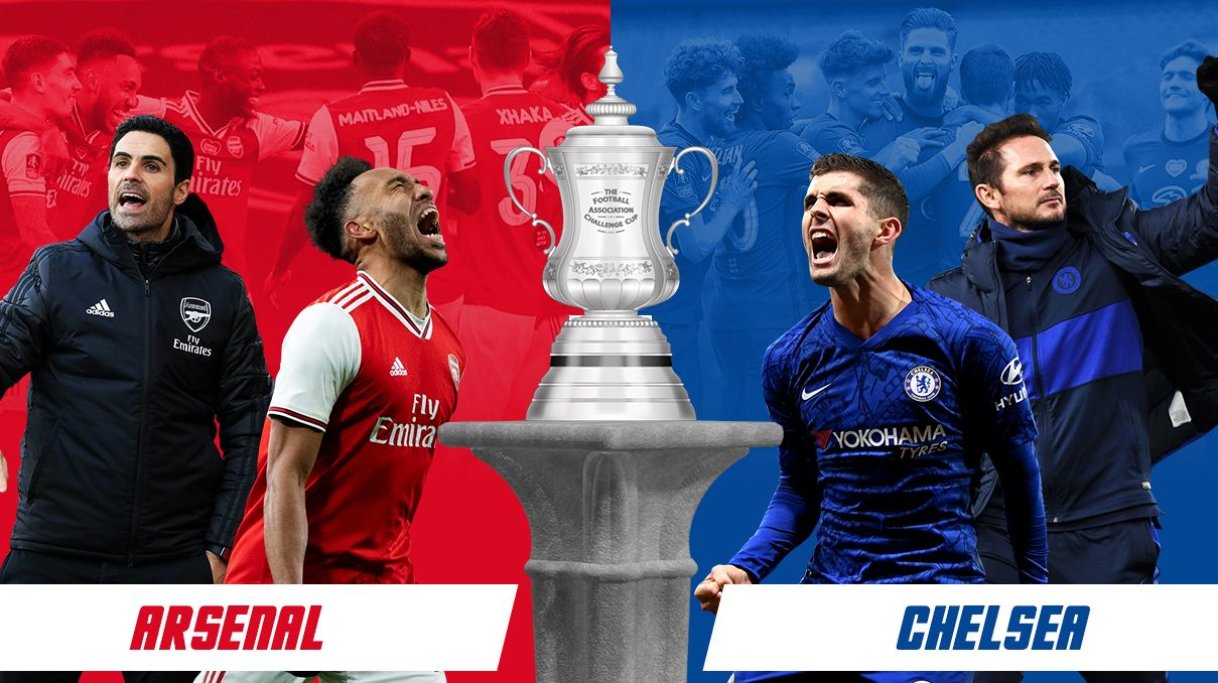 Wenger won’t be there this time out and the last cup final to feature these London rivals was the 2018-19 Europa League final. Arsenal, under Unai Emery, were thrashed 1-4 by a Maurizio Sarri led Chelsea. Sarri will not be in this final either.

Pressure is on Arsenal

Mikel Arteta has come and steadied the ship at Arsenal but the Gunners are far from being a force.

Emery’s disastrous management in the first half of the season as well as the average team quality condemned the Gunners to an eighth-place finish in the 2019-20 Premier League – the club’s lowest finish since the 1994-95 season.

Winning the FA Cup will assure Arsenal of a place in the 2020-21 Europa League and also help in increasing their transfer budget. The Gunners definitely need to bring in more quality players to improve and a lot will be riding on this final.

Frank Lampard’s Chelsea, meanwhile, have already secured a place in next season’s Champions League. Still, winning the FA Cup will be a major achievement for Lampard considering he will do it despite Chelsea facing a transfer ban.

Chelsea are also in the running for the 2019-20 UEFA Champions League but overcoming a 3-0 deficit against Bayern Munich is unlikely.

Path to the final

Arsenal defeated Leeds United, Bournemouth, Portsmouth, Sheffield United and Manchester City en route to the final. Their performance against the Cityzens in the semi-finals deserves a lot of praise as the Gunners produced some brilliant counter-attacking football to down Guardiola’s men.

Looking at the last six games between the sides, Arsenal have a slight edge.

The Gunners have won three. Chelsea have won two with the last meeting between the two sides being a 2-2 draw at Stamford Bridge.

Arsenal have not beaten Chelsea in the pair’s last three meetings, however. They fell to the Blues at the Emirates Stadium in December 2019, in addition to being thrashed 1-4 in the 2019 Europa League final in Baku.

The Gunners’ last victory over Chelsea was in January 2019 when strikes from Alexandre Lacazette and Laurent Koscielny sealed a 2-0 win.

Arsenal have a longer injury list than Chelsea while heading into this match.

Shkodran Mustafi is an addition to the absent list that includes Pablo Mari, Gabriel Martinelli, Calum Chambers and Bernd Leno.

Mesut Ozil will not play any part in this final. He is reportedly spending time in Turkey.

N’Golo Kante has regained fitness but is unlikely to start in this game. Billy Gilmour is sidelined for this one.

Lampard will, most probably, opt to go with Willy Caballero in goal instead of out-of-form Kepa Arrizabalaga.

Willian will also draw a lot of attention as this game could prove to be his final outing in Chelsea colors and there are rumors linking him with a move to Arsenal.

Arsenal fans will be hoping that the David Luiz who gave a man of the match performance against Manchester City in the FA Cup semi-final turns up, instead of the one who conceded a penalty and got sent off in the Premier League game against the Cityzens when football resumed in June.

Luiz has performed admirable in Arteta’s 3-4-3 system but his tendency to commit errors makes him a liability.

Lampard will surely be looking at Christian Pulisic to trouble Luiz and force the Brazilian into conceding yet another penalty.

The American’s superb dribbling makes him a hard player to contain, especially inside the box. Luiz, who conceded a record five penalties in this Premier League season, will have to tread carefully while dealing with ‘Captain America’.

Lampard’s men have struggled at the back with miscommunication and bone-headed decisions being a regular sight.

In such a scenario, going up against a free-scoring Pierre-Emerick Aubameyang will be a hard task for Kurt Zouma and his defensive aides.

Aubameyang matched his 2018-19 Premier League goal tally of 22 by scoring twice in Arsenal’s 3-2 win over Watford last weekend. The Gabonese also scored against Chelsea this season and will be Arsenal’s primary goalscoring threat in this final.

Zouma does not possess the speed to catch Auba so the Frenchman will have to position himself carefully and minimize shooting spaces for the former Borussia Dortmund man.

Both Dani Ceballos and Mateo Kovacic have shown a lot of improvement through the season. Both men will be key to controlling the midfield in this final as well.

Ceballos worked his way up to become a starter under Arteta and has impressed with his complete displays in the middle of the park. He can pick out teammates in dangerous spaces, tackle and rotate possession alongside Granit Xhaka.

Kovacic is a tireless worker with sound defensive skills. He is also an important player in maintain possession and his positioning allows Mason Mount to play in a more advanced position.

It will be interesting to see this battle as it will be crucial in determining which team will dictate play in this game.

With 13 FA Cup titles, Arsenal are the most successful team in the tournament’s history. A 14th title in what has been their worst season in decades will be a great confidence booster.

I, however, feel Chelsea are in a better position to win this game. They have had Arsenal’s number in the past couple of years and are less likely to wilt under pressure.

Both teams will find the net in this game as their defenses aren’t exactly the strongest. Chelsea will end up edging the Gunners in what should be an exciting and competitive FA Cup final.