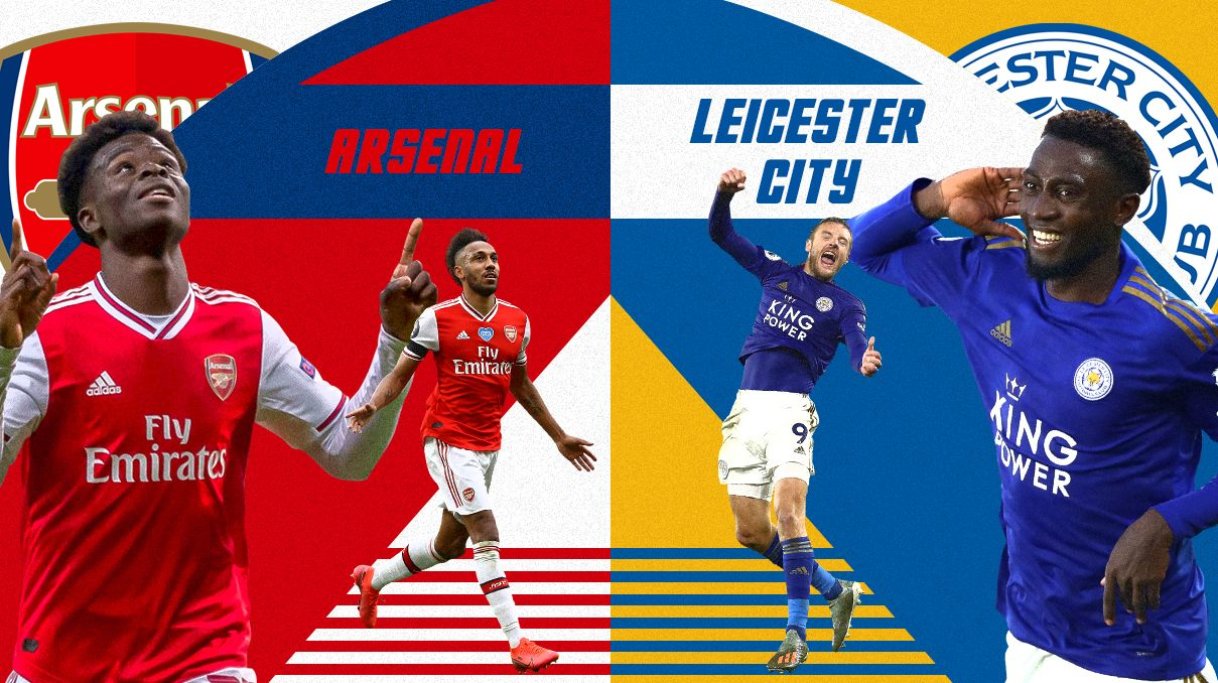 After leaving the Molineux with an important win, Arsenal are set to host Leicester City in another clash that is bound to have ramifications in the race for both the Champions League and Europa League.

Mikel Arteta showed great tactical astuteness in the win over Wolves. Arsenal, currently seventh are only three points behind the sixth spot. With four consecutive wins across all competitions, the Gunners will be confident of beating the Foxes on home turf.

Brendan Rodgers’ Leicester have not been at their best post-lockdown but the 3-0 win over Crystal Palace this past weekend would have been a major confidence booster. The Foxes are only a point above fourth placed Chelsea and two points above fifth placed Manchester United. They cannot afford to drop points at the Emirates Stadium if they wish to play in the Champions League next season.

After two back-to-back losses against Manchester City and Brighton, Arteta has turned things around with Arsenal.

The Gunners have won four on the trot including a win over Sheffield United in the FA Cup quarterfinals and three straight Premier League wins. This past weekend, the Gunners beat highly-fancied Wolves, 2-0, to strengthen their charge for European football next season.

Goals from Bukayo Saka and Alexandre Lacazette helped Arsenal get three important points, despite not dominating proceedings at the Molineux.

Leicester City’s win over Crystal Palace was their first since the Premier League resumed in June. The Foxes have drawn two, lost one and won one in their last four games.

Jamie Vardy reached a century of Premier League goals as he powered an impressive Leicester to the win over the Eagles at the King Power Stadium.

The last six games between Arsenal and Leicester City has seen a straight split. Both sides have won three each in the last six meetings.

The Foxes, however, do have the edge as they have won the last two meetings against the Gunners.

The reverse fixture at the King Power Stadium this season ended in a 2-0 win for Leicester City. Jamie Vardy and James Maddison were on the scoresheet for the Foxes.

Leicester do have an issue while playing against Arsenal at the latter’s home. The Gunners have won 12 straight at their home ground against the Foxes – a figure that is only better against Stoke City (13). The last meeting between the sides at the Emirates saw Arsenal win 3-1.

There are no fresh injury concerns for Arsenal. The long-term absentees include Bernd Leno, Gabriel Martinelli, Mesut Ozil, Calum Chambers and Pablo Mari.

Nicolas Pepe missed the last win over Wolves as his wife had gone into labor. The Ivorian is likely to take time off from this game as well.

Rodgers does have quite a few injury issues in his side. Ben Chilwell had to be subbed off in the win over Palace and he might not be risked.

Ayoze Perez and Maddison will also be assessed for this game as there are doubts over both players’ fitness. Ricardo Pereira sustained ligament damage in the Foxes’ win over Aston Villa before the lockdown and is out for a minimum of four months.

A resurgent Granit Xhaka runs the show from midfield for Arsenal and Dani Ceballos is the tireless box-to-box player who helps the Swiss rotate possession.

Arsenal’s midfield play this season has been average for the most part but Ceballos has given glimpses of his talent. Adept at advancing with the ball, he can create trouble for opposing defenses.

The Spaniard is going to have a hard game as Wilfred Ndidi is a master in the defensive midfield role. The Nigerian is a solid tackler and interceptor who revels in breaking down plays in the middle of the park.

Ceballos and Xhaka will have to be extra careful in possession as Ndidi is sure to pressurize them in the game.

The latest addition to the Premier League 100 goals club does love a match against the Gunners.

Vardy has found the net nine times in his nine Premier League games against the North London club. Six of them have been scored in the pair’s last five meetings.

With 21 goals, the 33-year-old is also leading the Premier League Golden Boot standings.

Shkodran Mustafi has been another beneficiary of Arteta’s coaching, turning around his form and regaining his place in the squad. The German has been strong at the back and is one of the reasons why Arsenal have registered three consecutive clean sheets in the league.

Still, a defense featuring him and David Luiz isn’t one to inspire confidence and an error from either can see Arsenal concede. Vardy, the ultimate poacher, will be looking to exploit any such mistakes from Mustafi and Luiz. Arteta will be crossing his fingers that Mustafi does not give into his old concentration lapses at the back.

The Gabonese forward has scored 19 goals in the league and two in the last four games – a brace in the 4-0 win over Norwich City.

Like Vardy, he also boasts of an impressive record in this fixture, scoring three goals in three games.

Jonny Evans, one of the more underrated defenders in the league, will have his work cut out in this game. The Northern Irishman is adept at doing the dirty work and clearing danger but matching up to Auba’s speed whilst he drifts in from the left is going to be a tough ask of Evans.

Arsenal’s current form and Leicester’s overall performance this season makes this one a hard game to predict.

The Gunners haven’t had much success against Leicester in the past two games but 12 straight wins at home against the Foxes is bound to raise Arsenal’s confidence. That record is also likely to serve as a mental block for Brendan Rodgers’ cohorts.

Looking at the obvious defensive frailties, and higher quality of opposition attackers, Arsenal’s clean sheet run is likely to end in this game.

The Gunners, however, should edge out Leicester to chalk a five-game winning run across all competitions.