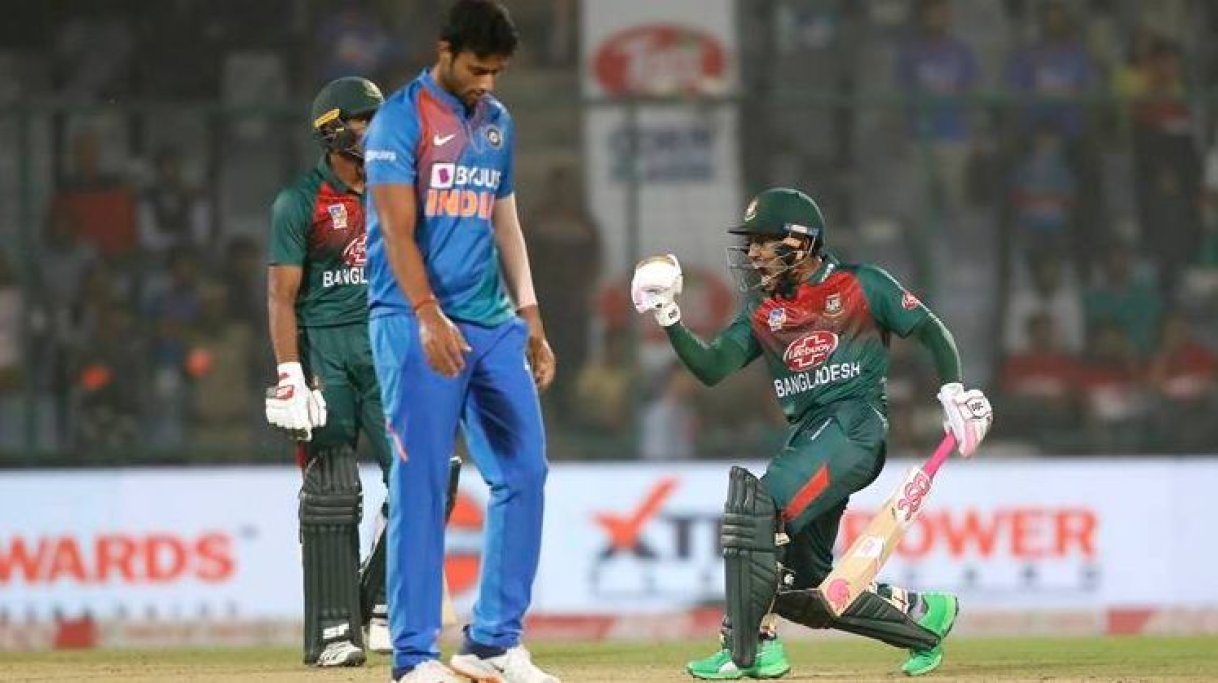 India and Bangladesh locked horns in the first T20I at the Arun Jaitley Stadium in Delhi amidst talks surrounding Delhi’s hazardous atmosphere pertaining to the excess pollution levels in the city.

However, few hours before the game, the visibility improved drastically and the match officials had no issues in commencing the match on time.

On a wicket which was greener than usual, Bangladesh skipper Mahmudullah decided to bowl first and asked the hosts to put runs on the board. For India, Rohit Sharma led his troops as India handed all-rounder Shivam Dube his T20I debut.

Batting first, India didn’t get off to the nicest of starts as Rohit was caught lbw in the first over itself courtesy a sharp nip-backer from Shafiul Islam.

KL Rahul joined Shikhar Dhawan, who himself was struggling to get his timing right. Rahul, after playing a few delightful strokes was caught in the covers for a 17-ball 15.

Shreyas Iyer did try to up the ante but it was one shot too many for the Mumbaikar as he returned after hitting a couple of sixes for 22. Indian batsman continued to play their time in but never looked convincing on a seemingly difficult and slow track.

Dhawan had one of his off days as he forced his way to a rather unimpressive 42-ball 41. None of the batters played a huge knock as the hosts were reeling at 118 after 18 overs.

However, in the last two overs, the duo of Krunal Pandya and Washington Sundar provided the much-needed impetus with their power-hitting to propel India to 148 in their 20 overs.

The visitors adapted really well, especially their spinners, who never allowed Indians to play their strokes with ease. Leg spinner Aminul Islam was the pick of the bowlers with two wickets in his three-over spell.

Chasing a tricky total of 149 to record their first ever T20I win against India, Bangladesh needed a solid start to set the tone for the chase. However, the tourists were dented early as Liton Das perished on the fifth ball to begin their chase on a poor note.

His opening partner, Mohammad Naim was joined by Soumya Sarkar as the two stitched a crucial 46-run partnership to recover the team from an early blow.

Indian spinners bowled tight lines and forced the opposition to manufacture boundaries and play some unusual strokes. But the presence of an experienced customer in Mushfiqur Rahim in the middle helped the Tigers as they took the game deep to frustrate Rohit and co. in the field.

After a 60-run stand for the third wicket, Sarkar was clean bowled by Khaleel Ahmed, who had an otherwise awful day with the ball. In the penultimate over, the left-arm bowler was handed the ball with 22 needed off the remaining two overs.

Khaleel was expensive and conceded 4 boundaries as Bangladesh were in touching distances of securing their maiden T20I win against the Men in Blue. In the last over, Rohit threw the ball to Shivam Dube, however, it was mere formality as skipper Mahmudullah hit the winning runs as they handed India a crushing defeat in Delhi.

Rahim, who was unbeaten in the end on 60, was adjudged the Man of the Match for playing a major hand in his team’s victory in the first T20I. Both the teams now head to the west to play the second T20I in Rajkot on November 7.

While India will look to bounce back to stay alive in the series, the Bangla tigers will see this as an opportunity to secure their first ever T20I series win over the Asian giants.