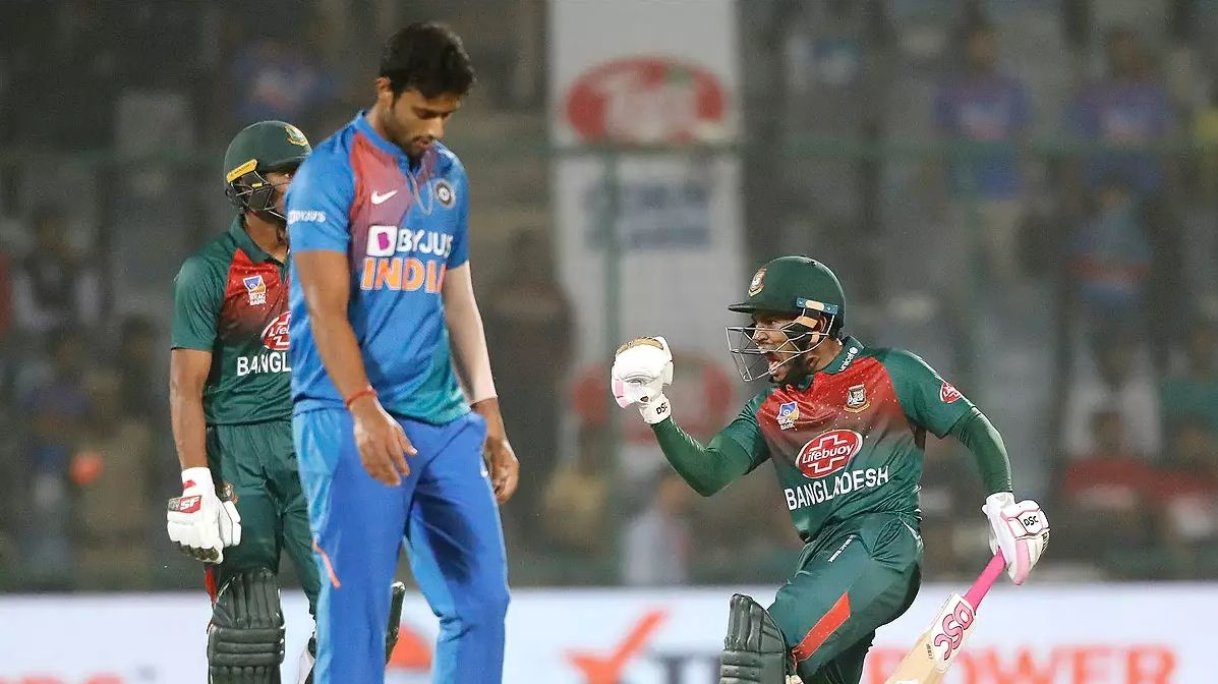 Bangladesh created history as they defeated India for the first time in a T20I. India didn’t start the series on the right note as they suffered seven wickets defeat at the Arun Jaitley Stadium in Delhi.

Bangladesh won the toss and opted to bowl first on what was a very sticky pitch to bat on. India lost their captain Rohit Sharma in the very first over. KL Rahul was the first batsman who was deceived by the slowness of the wicket and was caught while trying to up the ante.

Shikhar Dhawan’s 41 runs off 42 balls and some decent contributions from the rest of the batsmen helped India reach a competitive total of 148-6. The Bangla bowlers were right on the money as they used the pitch effectively.

Bangladesh were off to a great start in the powerplay with the score reading 45 runss for the loss of one wicket. Yuzvendra Chahal was brilliant in the middle phase as he made life difficult for Mushfiqur Rahim. India missed two LBW calls against him, which should have been reviewed. Later on, the missed calls and a dropped catch off Rahim by Krunal Pandya came to haunt them as Rahim won the game for Bangladesh with an unbeaten 60 off 43 balls.

Khaleel Ahmed who bowled three decent overs gave away 18 runs in his last over, which turned out to be a game-changing moment. Bangladesh finally managed to cross the line after eight unsuccessful attempts, whereas India would look back at those missed opportunities in the game.

Looking forward to the next game, India’s batting needs to step up and score big runs. Batting first, India has failed to put up a good total on the board which has cost them the game. The likes of Rahul and Iyer need to contribute heavily if that has to happen. Shikhar Dhawan’s batting too has come under the scanner as he is batting way too slow for this format.

Bangladesh, on the other hand, would be very happy with their performance in the first T20I. Rahim mentioned in the post-match presentation that they are here to win the series. They would look to carry the momentum into the second game at Rajkot.

There is a possibility of rain due to a cyclone, so it would be interesting to see whether the match takes place as scheduled.

India might consider making a few changes in the XI after their defeat. They might bring in Samson for Pant and Thakur for Khaleel Ahmed.

Bangladesh would tinker with a winning combination and most probably would go with the same XI.