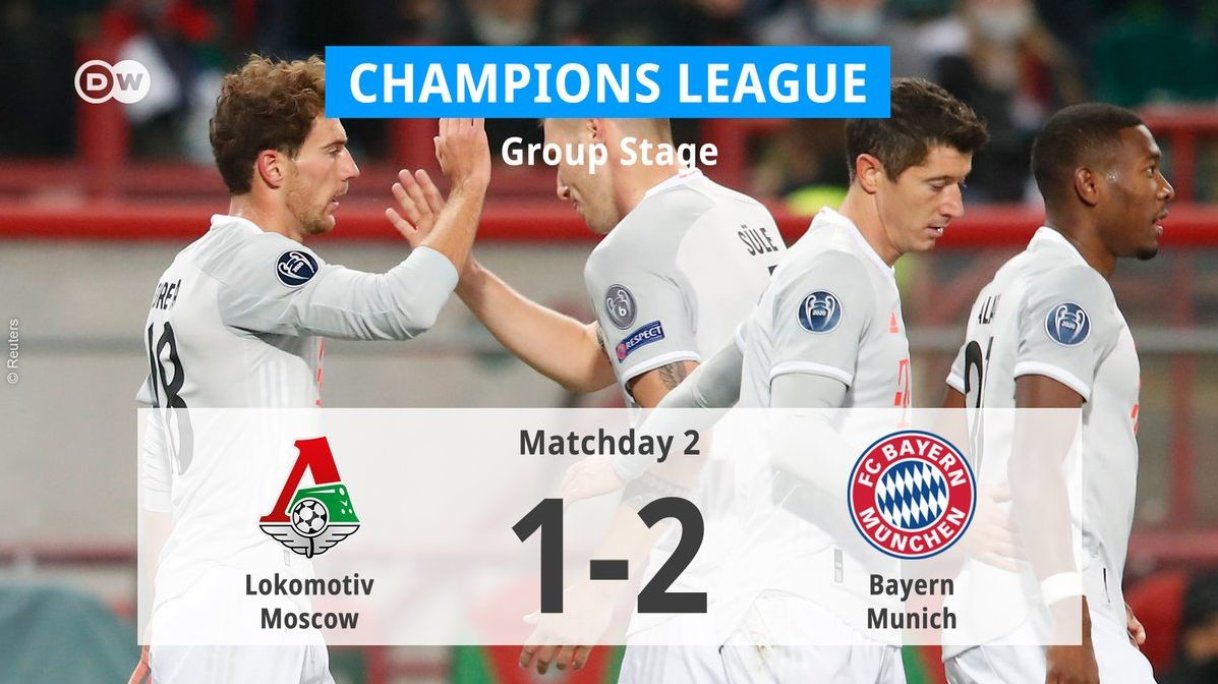 Bayern Munich and Lokomotiv Moscow met in the second round of group stages of the 2020-21 season of Champions League.

It was a match filled with exhibition stuff, as the Russians were focused to not get humiliated in their own backyard against the European Champions. An early header from Leon Gorezka in the 13th minute made it look like it would be another UCL humiliation by the Bavarians, but Lokomotiv Moscow did not let it happen as they showed immense fighting spirit in the match.

The match, at last, did end in a 2-1 win for Bayern from a late strike by Bayern Munich's Joshua Kimmich.

The midfield of both teams showed immense grit and determination. The Moscow side led by their no.7 Grzegorz Krychowiak and Anton Miranchuk along with the hard-working midfielder Daniil Kulikov made the day difficult for the Bavarians.

Anton Miranchuk had an extra-ordinary display as he grabbed the 70th-minute equaliser for the Russian club. Their constant high press and long precise passes exposed Bayern’s high line on several occasions.

The German club’s midfield had this as their day. Leon Goretzka scored the first for Bayern with a neat header from Benjamin Pavard. Later his compatriot and midfield partner Joshua Kimmich netted home a precise volley from the pass of Javi Martinez. The midfield keep covering the defence during counter-attacks and joined their attacking team-mates in the build-up play.

The match started as usual, with Leon Goretzka grabbing the opening goal for the German Giants. It then looked like it was going to a routine day for FC Bayern. But the press and power from Railways owned side had different plans. Coach Marko Nikolić took some time to settle his side into the game. But once they did, it was a different game altogether

The first 30 minutes of the match were dominated by Bayern, as they did not let the Russians have their day. But as the clock went by, The Russian started their high pressing. Lokomotiv Moscow pressed high and did not let their defence get scattered. The fast forwards of the Die Roten hardly got a sniff as they struggled to get into the match breaking the last line.

Some attacking worries for the Bavarians seem to have poked up its ugly head. Star duo of Robert Lewandowski and Serge Gnabry are yet to get a goal or assist. Also, the man of the match for Bayern in their last champions league game, Kingsley Coman had a frustrating night, as he failed to break the Russian wall.

It has been four games now since Lewandowski scored in European competition. His last goal was against Lyon last season in the semi-finals. The expectations are sky-high from the Polish International striker due to his goal-scoring record at Bayern. Though there seems to be a more compassionate look in fans than that of being dejected, the fact that Robert is not scoring in the UCL has worried many.

A narrow observation from the match was the ‘forced’ wide play from Bayern. The cracking passes that tore through midfield and defence were missing. Much of Bayern’s play happened using the wings and they were quite easier to be spotted before they could do much harm.

Hansi Flick did not introduce Leroy Sane for this game and also Serge Gnabry came in just at halftime. The German manager will have to look at several issues for his team and a bit extra-fuel as they have complicated fixtures ahead the next week.

Last but not the least, probably the most pleasing sight was the return of fans to the stadium. The Russian fans passionately supported their side and urging them to go the extra mile. The chants and presence of fans did lift the side, as they showed their determination and dedication to have a good day in front of their fans. The Russian came close to ending Bayern's 13-matches winning run.