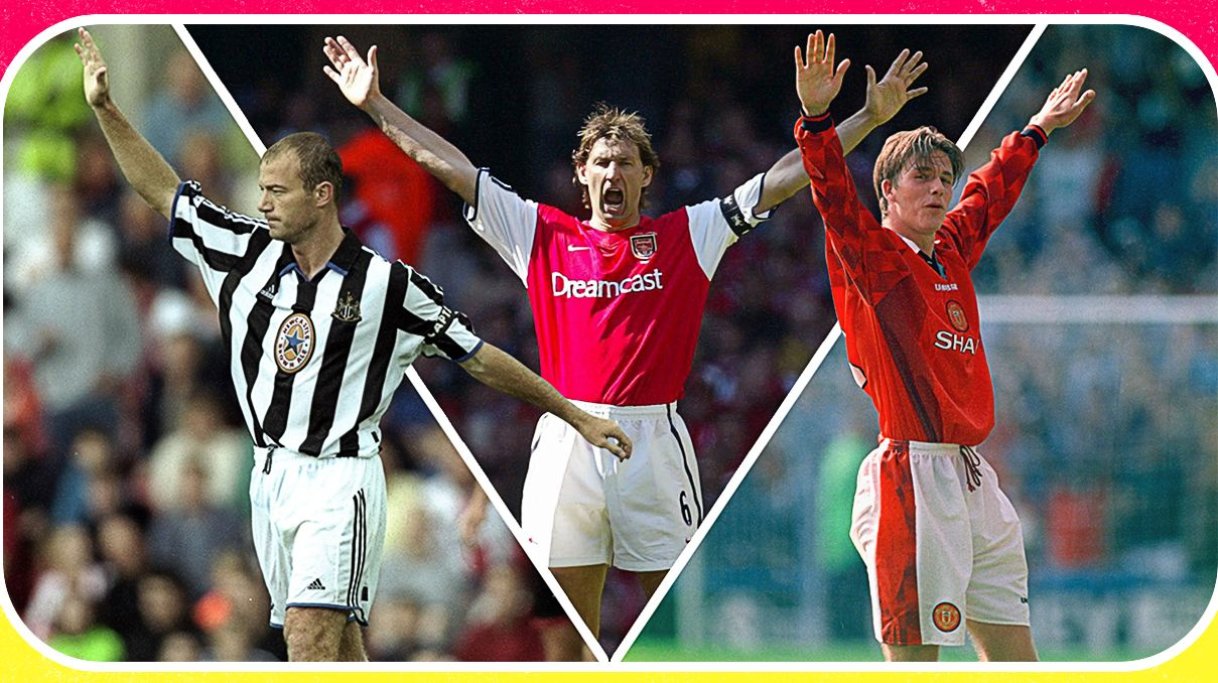 Premier League Team of the 1990s

At a time when countries across the world are in a lock-down to fight the coronavirus epidemic, it’s safe to say that live sports are being missed. In times like these, it’s hard to also not reminisce about teams and players who’ve graced the pitch.

Keeping that in mind, I’ve decided to start a series wherein I attempt to constitute the best team of a league for a decade. The first one of this series is the Premier League Team of the 1990s, a decade which saw the formation of the league and its growth into becoming the world’s most popular football competition.

I only considered performances from the 1992-93 season to the 1999-2000 season for this team. Players who debuted late in this time period but were dominant in the next decade were not considered – Thierry Henry being a notable example in this case.

Along with individual stats and achievements, team performances have been given a strong consideration. Unsurprisingly, the team is dominated by Manchester United and Arsenal players as both sides were a class above the other Premier League sides of the era.

David Seaman was a worthy contender for this position but he was no match for the Great Dane Peter Schmeichel.

Schmeichel protected the sticks for Alex Ferguson’s Manchester United machine from 1991 to 1999 and won five Premier League titles. Incredibly, however, he only made it to one PFA Team of the Year during this illustrious decade.

The Dane was a commanding keeper who constantly barked orders at his defensive line. His huge size and presence made for an intimidating prospect for any advancing forward. Add to that his trademark “star save”, developed from his handball playing days, and you had one of the finest keepers in world football.

Manchester United’s struggles to replace Schmeichel, with Fabien Barthez and Tim Howard no less before getting hold of Edwin van der Sar, speaks volumes of the Great Dane’s quality and influence.

You might be surprised to see two Arsenal players in this lineup. The Gunners might be a defensively inept side today but in the 1990s, they were the gold standard.

Lee Dixon was a marauding right back who contributed massively on both ends of the field. Tony Adams needs no introduction and was easily England’s best defender of the decade.

Under George Graham’s defensive minded approach, both Adams and Dixon were masters of playing the offside trap. More importantly, however, both served as anchors for Arsene Wenger’s revolution. Dixon and Adams’ stupendous work in the defensive unit laid the foundation for Arsenal doing the Double in the 1997-98 season. Individually, Adams featured in three PFA teams in the decade.

Gary Pallister and Denis Irwin round up the defensive lineup. Their praises are not sung in the same manner as that of Virgil van Dijk today but the pair’s quite effectiveness served as the bedrock for Ferguson and Manchester United’s success in the 90s.

Fergie regarded Irwin as ‘pound for pound’, his greatest ever signing. When the greatest Premier League manager effuses praise like that, you cannot argue. The Irishman manned the flanks at Old Trafford for 12 years, winning seven Premier League titles – six of them came in the 1990s. He was also selected in the 1992-93 PFA Team of the Year and the 1998-99 PFA Team of the Year.

In Pallister, Ferguson had a world class center-back who formed a solid partnership with Steve Bruce. The pair was nicknamed Dolly and Daisy which only served to mask their ruthlessness in defense. He was most dominant in the first half of the decade, winning four Premier League titles and featuring four times in the PFA Team of the Year. He spent the last two seasons of the decade at Middlesbrough under the tutelage of former Manchester United captain Bryan Robson.

First up, the hardest decision here was to choose between Roy Keane and Patrick Vieira. After careful consideration, I went with Keane because Vieira was arguably better and more influential in the first half of the 2000s.

Tenacious, combative and vindictive. These were the first words that came to my mind to describe Keane, who after taking over the armband from Eric Cantona, took the Red Devils to even greater heights. He was the embodiment of Ferguson’s win at all cost philosophy. The Irishman, however, was also a solid passer and had a knack for scoring important goals. At the end of the decade, Keane had solidified himself as one of the world’s best midfielders, winning five Premier League titles, a PFA Player of the Year award and three PFA Team of the Year selections.

The left and right sides of the midfield were easier to select. Ryan Giggs was a lightning quick winger whose breakneck speed made Ferguson’s counterattacks all the more lethal. The Welshman’s longevity adds more to his legacy as he was at the top of his game for two decades. He was also the poster boy for Ferguson’s faith in young players and his accomplishments in the decade speak for themselves.Giggs also scored some of the finest goals in this decade with his solo effort over Arsenal in the 1999 FA Cup semi-final replay standing out.

David Beckham is a global fashion icon and his fame has, arguably, exceeded that when he was a player. That criminally also glosses over how good he was in his prime. Possessing an extensive passing range and having the ability to deliver perfect crosses, Beckham in his prime was a joy to watch. His set-pieces were legendary and his work-rate made him a valuable teammate.

Bursting on to the scene with that wondrous half-line goal against Wimbledon in August 1996, Beckham was named the 1996-97 PFA Young Player of the Year. He topped the Premier League assist charts thrice, with two of those seasons coming in the 1990s. He also finished second in the Ballon d’Or in 1999 and was selected four times in the PFA Team of the Year. A bonafide Premier League legend.

Choosing a player for the attacking midfield role was also a hard task. I definitely thought about putting Dennis Bergkamp here but he played more as a second striker. Ditto with Gianfranco Zola.

That being said, it was hard to ignore Matt Le Tissier’s contributions with Southampton. The Saints were not powerhouses like Manchester United and Arsenal. Still, the Englishman was able to find the net 99 times in the decade (100 Premier League goals in all) and top the assists chart in the 1994-95 season. At his best, Le Tissier was a creative genius who lit up the league. To have such a legacy while being part of an unfancied side makes it even more impressive.

The toughest position to pick players for was easily up front. Choosing from a pool that included Dennis Bergkamp, Ian Wright, Robbie Fowler, Andy Cole, Mark Hughes, Jurgen Klinsmann and more was mind-boggling.

In the end, I had to go with the Premier League’s record goalscorer and the single-most influential football player in the league’s history.

Alan Shearer was an out-and-out goal machine during the 1990s. His aerial prowess, fearsome shot power and predatory instincts made him a complete traditional center-forward. The sight of Shearer outmuscling his marker before blasting the ball past a hapless goalkeeper was a common one in the 1990s.

The Englishman started off his Premier League spell with Blackburn and powered the Riversiders on to win the 1994-95 league title, winning the PFA Player of the Year award in the process. He then joined his hometown club Newcaste United and established himself as a club and English football legend. The Magpies had their closest brush with the Premier League title when Shearer was leading the line.

Shearer was the first man to win a hat-trick of Premier League Golden Boot awards as well as win it with two different clubs. His haul of 34 goals in the 1994-95 season is the joint-most with that of Andy Cole in the previous season (in a 22-team league). Shearer’s 31 goals in the 1995-96 season is the second highest in the present-day incarnation with 20 teams.

Partnering the deadliest goalscorer in Premier League history is a man who single-handedly changed the fortunes of a wounded giant. Eric Cantona walked in to the Old Trafford locker room in 1992 and gave Fergie’s men a winning attitude.

Manchester United’ enfant terrible fiddled with his collar whilst en route to collecting four Premier League titles and topping the league assists chart twice. There was also a kung-fu kick in between that was later explained via an epiphany on seagulls and trawlers.

King Eric was a character – no doubt – but also a magician on the pitch. The Frenchman conjured goals from nothing and led Fergie’s fledglings to the top, before abruptly calling it a day. Under Ferguson, Cantona gave the Manchester United project a boost that ultimately trickled down to the Premier League becoming a global behemoth.

As I mentioned before, it was hard to choose an XI from a treasure trove of talent and here are some of the people who I could not place in the team.