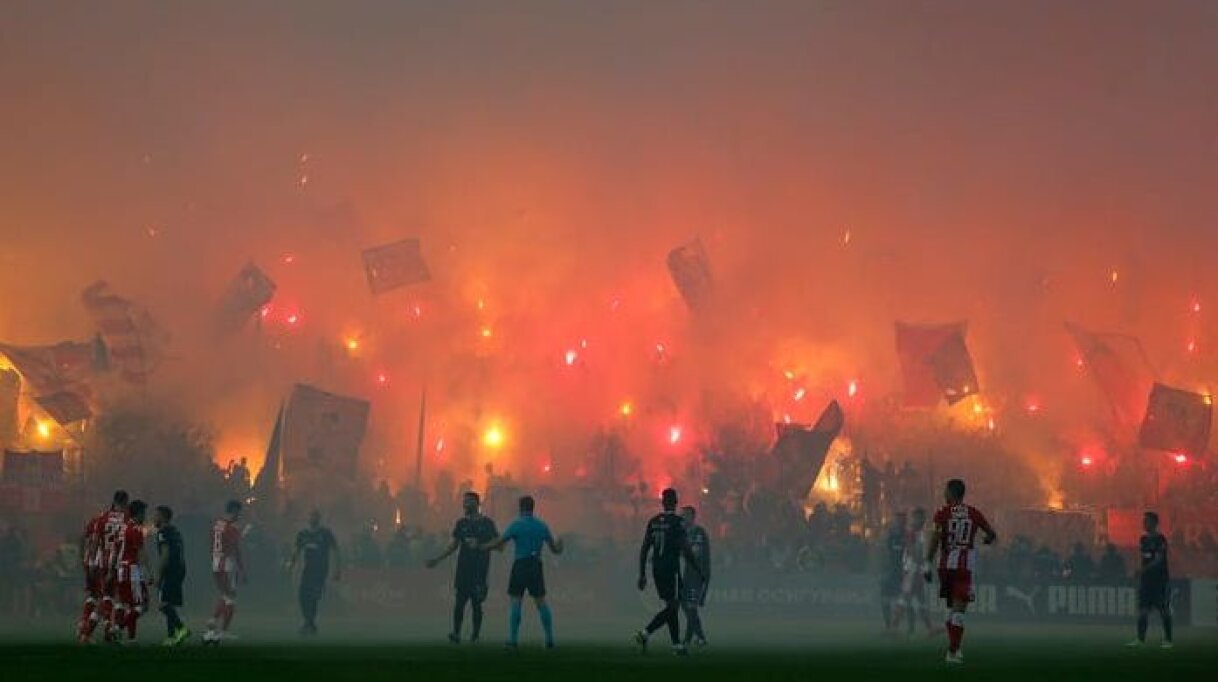 "When it comes to the Belgrade derby Serbia has two states of mind. You are either a Red Star Belgrade or a Partizan Belgrade fan" - Serbian journalist Darko Nikolic

Both Partizan Belgrade and Red Star Belgrade were formed after the second world war in post-war Communist Yugoslavia. These two teams dominated the Yugoslav football landscape throughout the Communist era along with Croatian biggies Hajduk Split and Dynamo Zagreb.

Since the violent breakup of the former Yugoslavia in the early nineties, the Belgrade derby is Serbia's most passionate and fearsome football fixture.

A rivalry of intimidation, violence, and fireworks

‘Smoke and fire are always certain at the Belgrade derby days, but your safety is not’- Kirsten Schlewitz

Red Star Belgrade is the most supported club in Serbia with a support base across the Balkans and the Serb diaspora throughout the world. With a bloody history attached to the club during the Yugoslav civil war, many Serbs consider the Red-whites to be a patriotic symbol for the whole country.

The controversial role played by Red Star's ultras or the Delije(Heroes) led by the late warlord Zeljko 'Arkan' Raznatovic during the wars with Croatia, Bosnia, and Kosovo still lingers heavily on the club's radical fanbase even to this day.

The rivalry between two of Serbia's biggest clubs literally began from the very first meeting between the two in January 1947. Red Star won the game 4-3 and the seeds of a deep-rooted rivalry were ingrained that divide a City right to its foundation to date.

On derby days both the Rajko Mitic Stadium or the Maracana and the Partizan Stadium would virtually resemble a hell for the away supporters on a respective home matchday. The atmosphere generated by the Red Star ultras or the Delije and the Partizan supporters or the Grobari(the gravediggers) makes this fixture unquestionably one of Europe's most passionate and violent derbies.

Both sets of supporters have a fearsome reputation of organized hooliganism that over the years has given Serbia a bad name in the football fraternity. The violent breakup of the former Yugoslavia that pitted Serbs against the Croats and Bosnians had a major impact on the mentality of the Serbian football supporters.

The economic slowdown following years of uncertainty and war gave rise to the hooliganism of a different stature in a country that is still struggling to pry away from the scars of war three decades ago.

Politics, organized crime, and football hooliganism go hand in hand in Serbia since its bloody breakup. According to Dobrivoje Radovanović, Director of the Belgrade Institute of Criminological and Sociological Research, rather than clamping down on these notorious football hooligans, politicians use these group of young men as political enforcers.

Hooliganism is deeply attached to Serbian politics and society. While ordinary citizens want violence-free games, whether it is football, basketball, or any other sport, it is evident that the country's political elite see hooliganism in a different way.

For them, the Belgrade derby is the ideal setting to unleash these forces and keep them 'match fit' for operations of a different kind that would suit the politicians' agenda.

During the early nineties, both the Belgrade clubs, Red Star and Partizan Belgrade showed an unusual patriotic unity, and derby days would pass off incident-free as hooligans from both Partizan Belgrade and Red Star Belgrade would find themselves fighting together against a common enemy in the form of the Croats having volunteered to fight for Arkan's Serbian volunteer guards or the 'Tigers' in the fields and streets of Vukovar and other Croatian cities.

As the Yugoslav civil war raged on in the '90s both the Delije and the Grobari were responsible for some of the worst atrocities ever seen since the second world war.

As Serbia slowly moved towards a responsible society after the secession of Yugoslavia, football in the country found itself in a precarious position with a heavily depleted national league devoid of funds and investments.

Yet hooliganism remained at the forefront with the eternal derbies being the primary targets for organized violence and racist behavior involving rival players and fans. With the two stadiums separated merely by a kilometer or so, the roads leading to the derby venues turn into pitched battles as the police struggle to control the fired-up emotions.

Leading football and economic analysts believe the sheer hatred between the two sets of fans is a psychological reaction to pent up economic and social suffering that many Serbs experienced after the civil war. 90 minutes for these hooligans provide an eccentric way of getting away from the rigours of daily lives and for them violence is the only way to show frustration against the authorities.

Senior Serbian footballers and coaches have admitted that violence was minimal during the days of unified Yugoslavia as criminals former warlords and corrupt politicians took advantage of a post-war vulnerable society to turn football matches into dens of antisocial activities.

For many Belgrade residents and players, it is hard to imagine why this fixture brings about so much violence and enmity that the whole of Europe is so fearful about. Like many other derbies around the continent, there is no political edge to this derby which makes it even more surprising that so much violence takes place both on and off the pitch.

The nineties were the most violent in the derby's history and most notably in 1999 when a teenage Red Star fan was killed by a stray rocket fired by the Partizan fans.

A common method in the Belgrade derby of showing enmity towards each other is to burn seats in the home stadiums by the respective away fans and then throwing those burning seats towards rival sections.

Semblance of calmness in the 'eternal derby'

With UEFA punishing the Serbian football federation for some high profile racist and violent incidents in both international and club football involving the national teams and the big two clubs, the Serbian government has come down hard on the organized hooliganism and police and law enforcement agencies are more alert to prevent nasty incidents during matchdays which have seen a reduction of life-threatening incidents.

In an interview with BBC Sport, a Serbian journalist feels there has been a change nowadays in terms of the amount of violence that used to be seen in matches between Red Star and Partizan.

"It's a bit calmer nowadays than it used to be", says Nikolic.

"There is no violence of the magnitude like in the 1990s or at the start of the 21st Century any more - mostly because police are more ready than ever, and we have new, pretty harsh laws against those who commit violence at sports events.

"But there is still a high risk that clashes will happen, as people come from all around, not just Serbia, but the Balkans and Europe - Red Star's fans have strong connections with 'brothers' from Spartak Moscow and Olympiakos."

Red Star Belgrade is Serbia's most successful club having won the European Cup in the 1990-91 season and the European Super Cup in the same season when Yugoslavia was still a unified country.

As far as head-to-head between the two clubs is concerned Red Star have of won 64 times against their arch-rivals while Partizan have tasted derby victory on 47 occasions. The clubs' latest meeting ended 1-1 at the Partizan Stadium on October 2020 in the Serbian SuperLiga.

Red Star Belgrade play their home matches at the iconic Rajko Mitic Stadium or the Maracana which used to have a capacity of 100,000 seats before UEFA regulations brought the capacity down to 55,000. On derby days or on any matchday the Delije give an added edge to the atmosphere by using carefully choreographed pyrotechnics and fireworks. The atmosphere is intentionally made smoky and noisy to intimidate the away players and fans alike.

Partizan Belgrade's home stadium is no less iconic as the Partizan Stadium also known as the JNA stadium with a 32,700 capacity. The stadium was opened in 1949 under the able leadership of some of Yugoslavia's finest military generals.