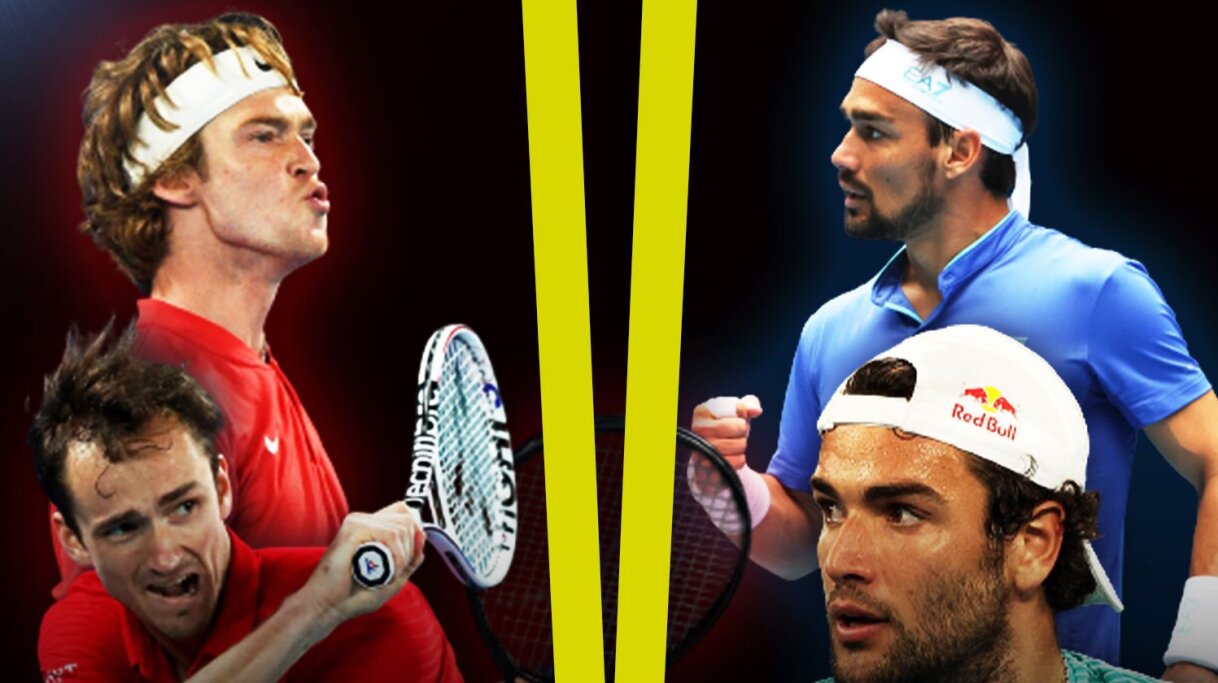 A new champion of the ATP Cup will emerge as Russia and Italy battle it out for the crown in the finals.

Italy won 3-0 against last year's runner-up Spain in the semifinals. Fabio Fognini edged past Pablo Carreno Busta in 3 sets in the opening match. His second serve improved significantly as he won 61% of points.

Matteo Berrettini defeated Roberto Bautista Agut in the second singles match handing the Spaniard his second loss in a row. The Italian had a superb day with his serve smashing 12 aces and winning 92% of points on his first-serve.

Spain's doubles pair of Busta/Marcel Granollers gave a walkover in the doubles match against Simone Bolelli/ Andrea Vavassori leading to a clean sweep for Italy.

On the other hand, Russia defeated Germany 2-1 in their semifinal. Andrey Rublev overcame Jan-Lennard Struff in 3 sets to maintain his unbeaten run in the tournament. The Russian hit 11 aces, smashed 37 winners and claimed 84% of his first-serve points.

Daniil Medvedev outlasted Alexander Zverev in 3 sets in a 2-hour 38-minute thriller. It was Medvedev's 3rd win in a row against the German. Despite committing a whopping 13 double faults in the match, the Russian took crucial points by smashing 12 aces and won 82% of points on his first-serve.

Andrey Rublev is in red-hot form in the ATP Cup so far having won all his singles matches. Rublev has won more than 80% of points on his first serve. He has kept the points short and not allowed the opponents to control the rallies from the baseline.

“In the first set I was nervous, and plus he was playing good, he was attacking and was all over me, I could not answer, and then in the second set I said, if I am going to play like this, I am going to lose 6-3. 6-3 and that's it. so I need to change, go for the shots, start to hit well, I raised my level, I started to play more aggressively, I started to move better, that was the change," said Rublev after his strong comeback victory against Struff.

"I am happy because of course this week I started slowly and I am getting better and better, the sensations are good," opined Fognini after beating Busta in the semifinals.

The Italian's controlled aggression and composure under pressure have been impressive.

Fognini leads the head to head record 5-1 against Rublev.

Prediction - Fabio Fognini to win in three sets against Rublev

Medvedev played the crucial points better as he got the better of Zverev in the semis. “We are really happy to get the win, tough matches for both as Andrey and I lost the first set, it was not easy, because we had two days off before the match, but happy we are in the final, that's the most important," said Medvedev quite pleased with his performance.

Berrettini continued his winning streak in the tournament. "It is an unbelievable feeling, the job is not done yet, but we are really happy for what is happening, I am feeling good and pumped to play not just for me, but for my team and for Italy in general, that's what matters the most, I am really looking forward to playing tomorrow," said an optimistic Berrettini eagerly looking forward to the clash in the finals.

Medvedev leads the head to head record 1-0 against Berrettini.

3) The doubles combination has not yet been announced by both teams. Russia will be quite concerned as they have not won a doubles match yet in the tournament. They can go either with Karatsev/Donskoy or Karatsev/Rublev. Italy also has two options in place, Bolelli/ Vavassori or Fognini/Berrettini.

With the Australian Open set to begin on Monday, the team winning the title will arrive for the tournament with full confidence.

So, whom are you vociferously supporting for? Russia's attacking duo of Rublev and Medvedev or Italy's firepower of Fognini and Berrettini. Do let us know in the comments below.