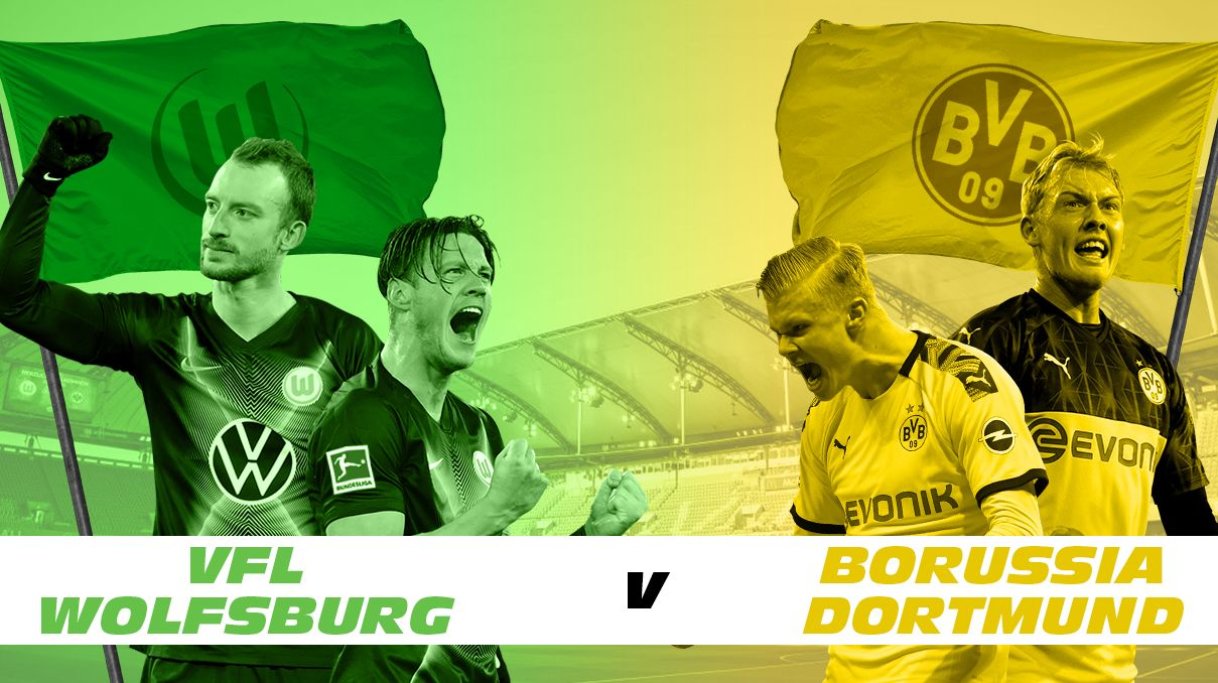 Amidst what truly has been a global lockdown, Bundesliga came to the rescue for all the football fans around the world. The league has helped in making weekends more exciting and something for fans to look forward to. It continues this weekend as well as Borussia Dortmund travel to take on VfL Wolfsburg.

Lucien Favre’s side were dominant in their 4-0 thumping win against Schalke in the Revierderby, as they closed the gap to just a point only before the defending Bundesliga champions got the gap reinforced in a 2-0 win over Union Berlin the following day.

BVB’s opponents this weekend are Wolfsburg, who will be looking forward to making things unpleasant for Dortmund. The 2008-09 Bundesliga champions were victorious over Augsburg last weekend thanks to Daniel Ginczek’s late winner. Wolfsburg at the moment hold a slight advantage over Freiburg and Schalke in the race for the final Europa League spot.

Dortmund have had a clear hold over the fixture recently, having won 24 of the last 43 battles between the teams. Die Wolfe have managed to pull out only ten games in this time frame. Wolfsburg’s last victory against their opponents came in 2015.

Dortmund have been consistent in their recent Bundesliga games winning four out of four and have lost only once in their last five games in all competitions, the defeat coming against Paris Saint-Germain in the Champions League last 16. The wins came against Schalke most recently and against Monchengladbach, Freiburg and Werder Bremen respectively.

The fluidity in midfield and attack with a good amount of rotation shows their great rhythm while their style of exploiting spaces via full-backs makes their offensive side more effective. Dortmund have added 15 points out of the 21 available while Wolfsburg have three wins and two draws in their last five league games.

Dortmund are keen to take the race till the end while Wolfsburg’s recent stats show they will not give up without a fight.

The two sides played each other last year in November at Signal Iduna Park with Dortmund emerging as clear winners in a 3-0 victory where coincidentally, last weekend’s top performers, Thorgan Hazard and Raphael Guerreiro contributed.

Wout Weghorst’s return from suspension will unfortunately, put last weekend’s hero Ginczek to the bench while Yannick Gerhardt and the club captain Joshua Guilavogui will be missing the game again with head and knee injuries respectively.

Dortmund were hit with a huge blow as reports sidelining Marcos Reus’ absence for the rest of the campaign were confirmed because of a thigh problem. However, Dortmund have enough creative options at the moment and the combination of Julian Brandt, Thorgan Hazard and Erling Haaland together on the pitch proved devastating and hence, is reliable enough.

Nico Schulz and Dan-Axel Zagadou remain sidelined while Alex Witsel is also very unlikely to be risked. Being on the bench in the last game, Jadon Sancho will also be given his chance to start and build match-fitness ahead of the do or die clash against Bayern.

Erling Haaland has been on a scoring spree and has ten goals and two assists in nine games while Brooks is one of the top defenders in the Wolfsburg squad.

The American defender is strong in air and his passing abilities are good. Being strong with interceptions and physically, the clash between the two will be exciting to watch.

Paulo Otavio has played only five matches but his defensive numbers are very strong. With a tackle success percentage of 76% and almost 50% and above crossing accuracy he will be a good deterrent for Sancho, who is Dortmund's top goal scorer and assist provider.

The English winger is the only player to have reached double figures in both goals and assists with 14 goals and 15 assists. His fitness after the lockdown, however, has been questioned and hence it will be very interesting how he fares against the Wolfsburg defensive line.

BVB will not take the risk of taking their opponents lightly as Oliver Glasner’s Wolfsburg will be looking to play their best football to inch closer to the European spot. Playing at home, Wolfsburg will try to play a strong possession football along with an intense press.

However, Borussia Dortmund’s fluidity and ruthless attacking nature will be aiming to fire from all ends.