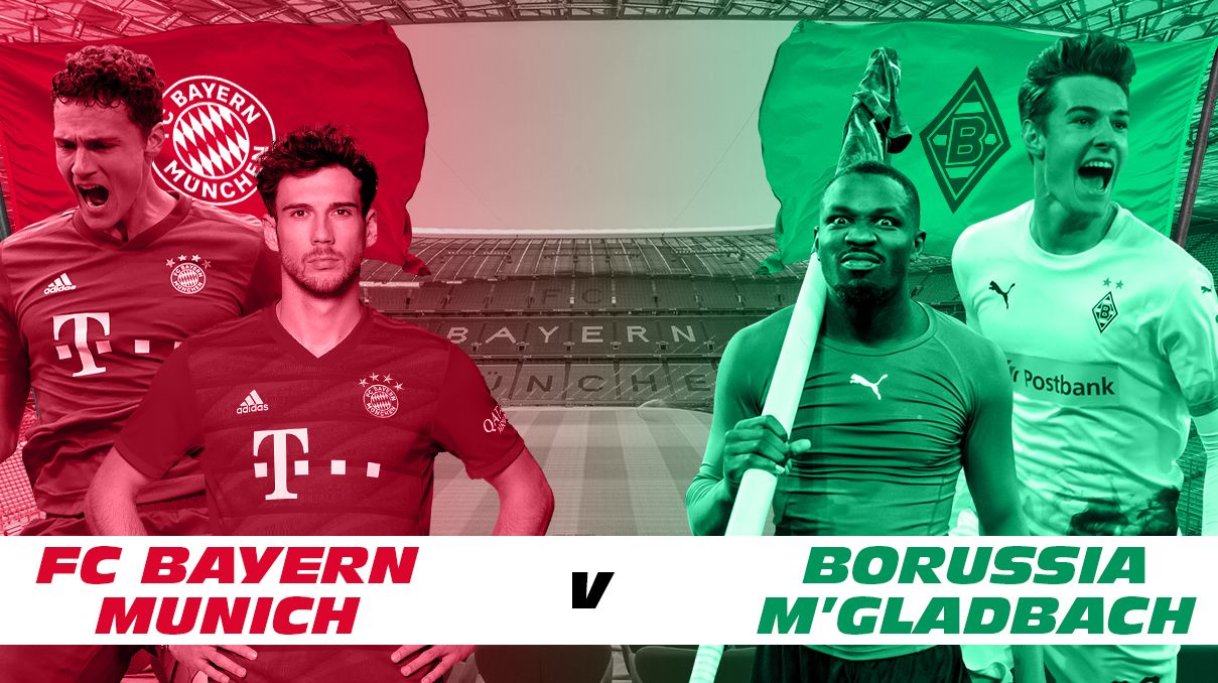 For most fans across the world, Bayern Munich vs Borussia Dortmund is Der Klassiker. For a few, however, Bayern Munich going up against Borussia Monchengladbach is the original Klassiker. All I know is that this is a big-ticket Bundesliga clash between two historic rivals that promises to be an exciting affair.

Bayern Munich are well on course to win an eighth consecutive Bundesliga title. Monchengladbach, meanwhile, are fighting tooth and nail with Bayer Leverkusen for the fourth spot and Champions League qualification. Marco Rose would definitely have preferred a visit to the Allianz Arena at some other time.

Bayern Munich have been on a roll since the Bundesliga restart. The Bavarians are yet to face defeat since the restart. Cumulatively, they have won nine Bundesliga games in a row, staying undefeated for the last 16.

Hansi Flick’s men put in a phenomenal display last weekend to beat Bayer Leverkusen 4-2 at the BayArena. They also got the better of Eintracht Frankfurt on Wednesday to reach the DFB Pokal final where they’ll face Leverkusen.

Monchengladbach had a golden opportunity to gain a lead over Leverkusen last week but they squandered it. Die Fohlen succumbed to SC Freiburg and to add to their misery, star forward Alasanne Plea was sent off.

Rose’s side has stuttered since the restart, winning two, losing two and drawing one. The defeats have proved to be costly as it allowed a resurgent Bayer Leverkusen to claw back and fight for a Champions League berth.

Unlike other rivalries featuring Bayern Munich, this one has been evenly matched in recent seasons.

Bayern Munich and Borussia Monchengladbach have split wins in their last six meetings across all competitions. Die Roten have had a slight advantage in goalscoring, with 12 goals (three more than Monchengladbach’s tally).

Ramy Bensebaini was the star for Die Fohlen as he bagged a brace to offset Ivan Perisic’s opener. The game wasn’t without drama as Javi Martinez received a red for a rash tackle on Marcus Thuram and conceded a 91st minute penalty which Bensebaini duly converted.

Suspensions galore for both sides.

Bayern Munich will be missing their deadly attacking duo of Robert Lewandowski and Thomas Muller as both have accumulated five yellow cards and are suspended for this game. The Pole is leading the Bundesliga scoring charts and Muller is leading the assists table.

For Borussia Monchengladbach, Plea will be sitting out after being sent off in the defeat to SC Freiburg. With 10 goals, the Frenchman has been Monchengladbach’s top scorer in the league this season.

Thiago Alcantara had featured in the win over Eintracht Frankfurt this weekend. He’ll be sidelined for three weeks, however, as he has had to undergo groin surgery.

Even Bayern Munich’s starting XI is not fully fit as Jerome Boateng is facing hip issues and Serge Gnabry also playing through some niggles. With no Lewandowski and Muller, this can be a problematic game for the Bavarians.

Denis Zakaria, Fabian Johnson and Tobias Strobl will not be taking part in this match. Raffael and Breel Embolo’s status is also doubtful with the former having injured his foot and the latter facing some muscle issues.

With both Lewandowski and Muller suspended, Flick is bound to start Ivan Perisic.

The Croatian started in the midweek win over Frankfurt and also opened the scoring. In the Bundesliga, he has given a decent return of four goals and four assists in 20 appearances (10 starts).

His pace will be troublesome for Matthias Ginter, Monchengladbach’s best defender. The German relies on his aerial prowess to clear the ball away from danger. He has shown susceptibility to quick players and Perisic possesses a skill-set that will make Ginter uncomfortable. The German center-back will have to work with his wing-back in tandem to contain the dangerous Croat.

Gnabry is slated to play as a withdrawn forward in Lewandowski and Muller’s absence. The German forward has had a breakout season but has looked slightly jaded since the Bundesliga restart.

This, however, could be the game where Gnabry returns to his best. The former Arsenal man’s pace and decision making have reaped rewards for the Bavarians and Nico Elvedi will have to be at his best to prevent him from settling in.

The Swiss defender’s strong reading of the game will be important in cutting down the supply to and from Gnabry, which should ideally lessen his impact. Bayern Munich are without two of their best attacking players in this game so there is a possibility that Gnabry will be isolated by Elvedi and his defensive partners.

German midfielder Joshua Kimmich rarely puts a foot wrong. He is a player Flick can rely on to put in an impressive shift.

This season has also seen Kimmich hone the offensive side of his game, as seen by his seven Bundesliga assists.

In this game, Flick, however, will want Kimmich to play a more defensive role in order to contend with Borussia Monchengladbach captain Lars Stindl.

Stindl is a veteran whose attacking talent is without any doubt. In 10 Bundesliga starts, the German has racked up nine direct goal contributions. The versatile attacking midfielder is adept at link-up play which will help release Thuram into dangerous positions.

For Bayern to gain an upper hand in the midfield, Kimmich will have to stick close to Stindl and suffocate his passing lanes.

Had Lewandowski and Muller been playing, Bayern Munich would have been runaway favorites.

Their absence, however, makes this a more balanced affair.

Simply put, there is much more at stake for the visitors.

They have also, however, been a bogey team for the 28-time Bundesliga champions. Monchengladbach raise their game when up against Die Roten. Smarting under the loss to Freiburg, expect Rose’s men to come out in force and take the game to Bayern Munich.

I see Monchengladbach stopping Bayern Munich’s nine-game winning run as they will be able to play out a 1-1 draw.