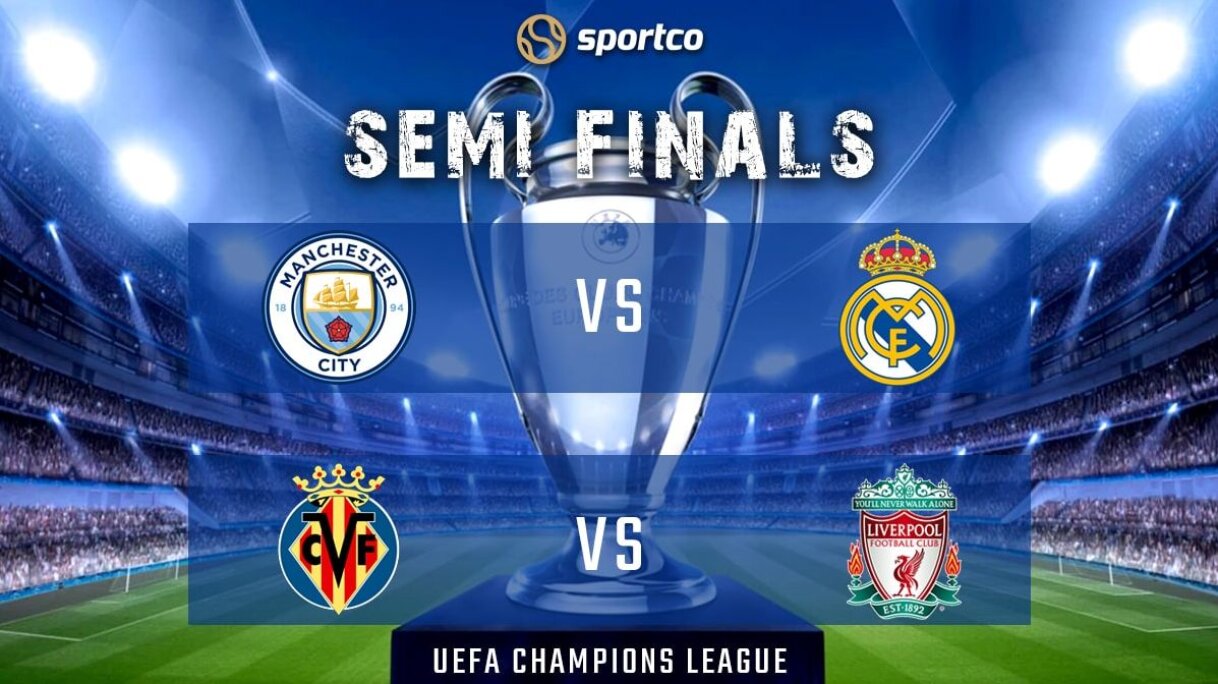 UEFA Champions League 2022: Semi-Final Prediction | Are we on for an all English Final?

Three powerhouses of Europe and an underdog are in contention for the Holy Grail, and only two will make it to Stade de France on 29th May. On this massive occassion, Sportco delivers it's Champions League prediction for both semi-final ties.

A mouth-watering tie awaits when Manchester City plays Spanish Giants Real Madrid in the first leg of the Champions League on Tuesday night at Etihad Stadium.

The next day, Liverpool will welcome Villarreal at Anfield to play the first leg of the Champions League semi-final on Wednesday night.

This is the second-time Manchester City looks favourite to progress to the Champions League final. However, Real Madrid will be the banana skin in their route to the final.

However, under Guardiola, they have become an intimidating side in Europe, who are looking to add their maiden Champions League trophy to their cabinet.

Despite not having a proper striker, Man City has been a dominating side credit to their midfield, who have been indomitable and always found a way to break their opponent, which Real Madrid’s midfield should pay heed to.

In contrast, the 13-times European winner Real Madrid have nothing to lose, seeing off two heavy contenders PSG in the round of 16 then Chelsea in the quarter-finals, with an ageing squad, who will now play against their old rival from his Barcelona days, Pep Guardiola.

Although the Los Blancos have a world-class striker, Karim Benzema and a well unanimous midfield which can turn the game on his head, Manchester City's defenders will be prudent of their threat. But overall, if we see Manchester City have a squad that can pull the strings and decide the fate of the match.

England’s juggernaut Liverpool have been overwhelming in all the games and the demolishment of Manchester United 4-0 was a testament to it.

They have set their status so high this season that they are now in the quest for an unprecedented quadruple, having already won the Carabao Cup against Chelsea, and are now in the final of the FA Cup, where they will face similar opposition they faced in League Cup.

In the Premier League, they are one point behind the leaders, Manchester City. Liverpool are frontrunners in this unrivalled quadruple, and It would take a beating to see off the Reds.

Klopp and Unai Emery are old foes who have often shared spoils and will come face-to-face again.

Liverpool have galvanised themselves into a powerhouse in Europe and are a poised team, who have shown aggression, guts, and fight to go all-in for the trophies in this campaign.

Similarly, Villarreal are in the sublime form. They demonstrated quality football against Bayern Munich to proceed to the Champions League semi-final for the first time since 2006. Unai Amery is steering his men to a dream trophy.

They might be underdogs in this competition, but the yellow submarine have illustrated that they are here to get their business done. Although It will be a challenging task for a club to go to Anfield and return with a victory.

But Villarreal are always quick to find flaws in a team that Liverpool should be wary of. The Yellow Submarine will have to toil enough to eke out a won at Anfield, and the Reds will certainly make the most out of their home game against Villarreal.

Champions League Semi-Final Prediction: Liverpool to advance to the final by narrowly edging past Villarreal in tough two legs.