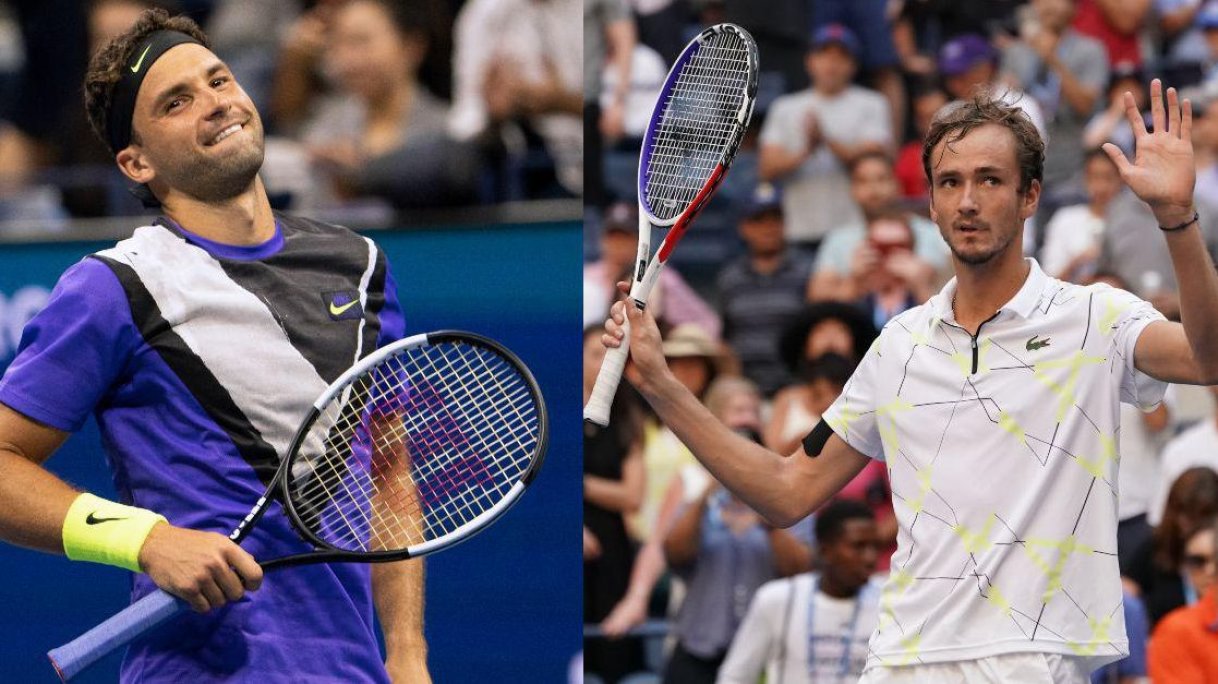 The consistent performer Daniil Medvedev is all set to lock horns with Grigor Dimitrov in the first US Open semi-final, tomorrow.

Medvedev can rightly be called the Marathon Man as he has won 49 matches this season. The Russian can maintain his stamina and hunger for the game even in tough situations.

The current year has been amazing for Medvedev as he has reached six finals and winning titles in two of them. The Russian has defeated some best players on the tour such as, Murray,  Nishikori,  Djokovic (twice), Tsitsipas, Cilic, Khachanov, Thiem, Goffin, Schwartzman, and Wawrinka this year.

The North American hard court season has been tremendous for Medvedev as he has played three finals in a row at the Washington Open, Rogers Cup, and Cincinnati Open.

The American crowd have not been kind to Medvedev in the ongoing US Open. The Russian has been through constant booing before, during, and after his matches, however, Medvedev has constantly tried to ignore them and focus on his game.

Medvedev began his campaign by trouncing Prajnesh Gunneswaran in straight sets. The Russian suffered a little blip in the third set of the next match, but didn't let Hugo Dellien get better of him.

The Queens champion, Feliciano Lopez fought hard against Medvedev in the third round, but Medvedev edged past him in four sets. The match witnessed tense moments as the Russian swore at the crowd, provoked them and was fined $9000. He survived another test by winning the fourth round against German qualifier, Dominik Koepfer.

The next clash in the quarterfinal wasn't easy either as Medvedev met Stan Wawrinka who had overcome Novak Djokovic in the fourth round. The Swiss should have won the first set, but failed to grab the crucial moments. Medvedev used this as a benefit and even after losing the third set, he managed to finish the match in four sets.

Dimitrov, on the other hand, had a phenomenal journey as he overcame all the injuries and didn't think about his ATP ranking (78) while facing big stars in the ongoing tournament. The Bulgarian made the right moves in the tournament and surprised everybody with his tremedous performance.

The Bulgarian's best performance was just a quarter-final finish in the ATP 250, Brisbane Open. He failed to impress and lost to lower-ranked players in the early rounds. Dimitrov got stunned by the World Number 405, Kevin King in the straight sets of the Atlanta Open. He followed that with two consecutive losses to Wawrinka in the first round of the Rogers Cup and Cincinnati Open.

Dimitrov got two legends,  Andre Agassi and Radek Stepanek in his coaching team from the Rome Open in May, 2019. Even though both of them were not available in the Flushing Meadows but, their previous inputs have benefited the Bulgarian as he stunned 5-time champion, Roger Federer in the quarter-final.

The Bulgarian played the best match of his life against Federer as he troubled him with his attacking game. The Swissman was forced to catch up, but his mistakes kept coming with unforced errors accumulating to 61 at the end of the match.

Federer did not give up despite his upper back injury, which restricted his movement. Dimitrov didn't sympathize and won the fifth set 6-2. The Bulgarian's celebration indicated how much this win means to him.

He played to his full potential in the match and the memories of Dimitrov playing like in 2017 flooded all the fan's mind, when he reached the Australian Open semi-final and won the year-end ATP final that year.

A statistical comparison of Medvedev and Dimitrov ahead of their match

Medvedev and Dimitrov have faced each other on two occasions in the past, winning one match each. This makes me believe that both of them will give their 100% to ensure they reach their first Grand Slam final.

Dimitrov is going to in this fixture after an epic five-setter against Federer in the previous round. Also, the Russian has played four matches on the court compared to Medvedev's five. He has also spent less time on court, 10 hours and 16 minutes, which is significantly less than Medvedev's 12 hours and 33 minutes. Even though Medvedev has played so much, he can trust his body to support him, if this match goes to five sets.

I am really happy for Grigor, that he's coming back to his shape,” said Medvedev. “I think he's No. 78 in the ATP Rankings right now, before this week, so he's definitely going to go up. I saw some matches of him here. He was playing unbelievable, I think, we all know what he's capable of when he's playing like he can.”, said Medvedev before the match increasing the excitement.

Looking ahead to playing Medvedev, Dimitrov said, “He's been pretty focused throughout the whole summer. He's been having a great summer, a lot of confidence building up, winning Cincinnati, being already here. A lot of good matches, a lot behind him really… I've just seen him a little bit in the background here, how he has played. Clearly, he's doing something right. Again, it's not going to be an easy match.”

The fans will look to bask in the amazing atmosphere as the two players who love playing on hard-courts battle out against each other.