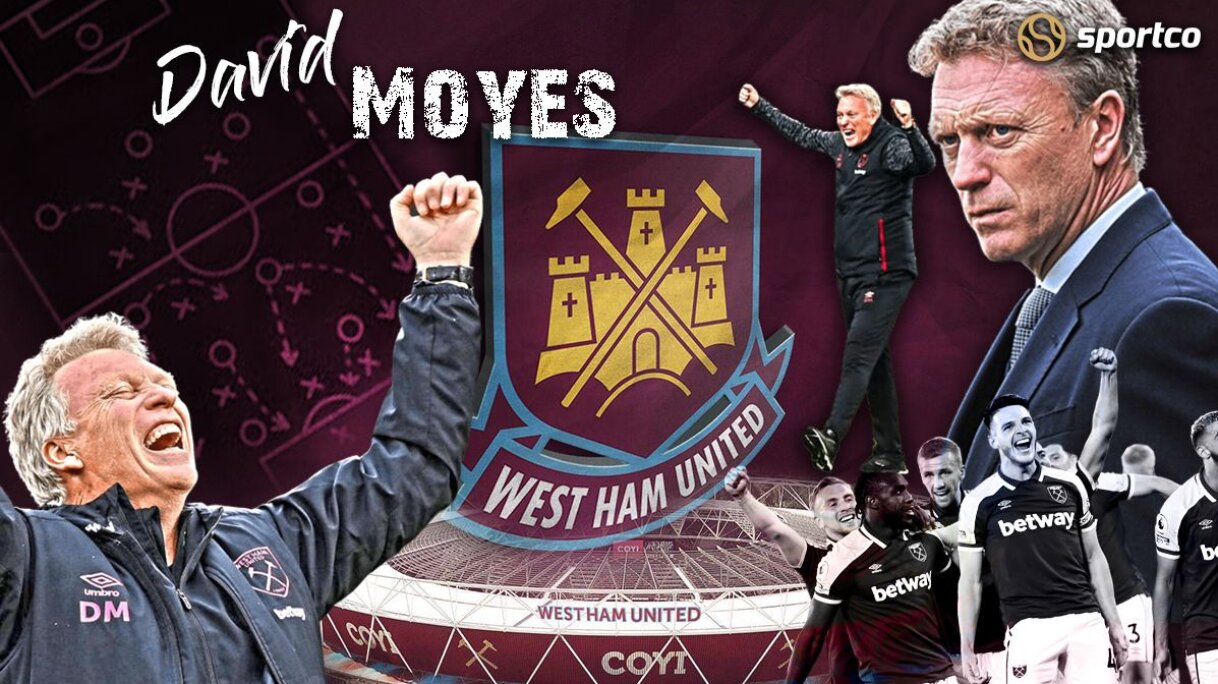 David Moyes has shown great redemption in his managerial career, after taking over the helms at West Ham United FC. The 58-years-old has revitalized the club into a competitive outfit in the Premier League.

In this article, we glance through the career of David Moyes along with a detailed breakdown of his tactics at West Ham United.

David Moyes has seen ups and downs in his managerial career, although he was viewed as an astute manager at Everton due to which Manchester United came knocking on his door and Moyes was appointed Manchester United’s manager replacing Sir Alex Ferguson. However, things didn’t work out at the Red Devils, with a poor string of results that led to the sacking of Moyes.

Post his time at tumultuous time at Man United, Moyes tried managing other clubs, such as the Spanish side, Real Sociedad, and Sunderland, however, none of these panned out the way it was meant to be.

Moyes' managerial career had been descending since his sacking from Old Trafford, but a shot of confidence was all that was needed.

He was relieved from his duty in 2018, after failing to find any suitable manager, West Ham reappointed David Moyes, and after that, he reignited West Ham and transformed them into a club competing for European places in the Premier League.

On that note, we take look at David Moyes' tactics and system of play at West Ham United

David Moyes deploys a 4-2-3-1 style of play, as his game revolves around resilience and discipline. His team does not always play attractive football, but his focus relies on tenacious football.

Since joining the London club, David Moyes has done a great job at West Ham, as the team has thrived under Moyes' managerial stewardship.

David Moyes likes flexibility in his formation where he can rotate his players when needed, and his dynamic play often ends in great results.

The Scotsman often opts for double training sessions in the early stages of a season, so, during games the team press relentlessly to win the ball.

West Ham relies on short passes and less possession-based play, the team is also great in aerial duels and willing to dive into tackles.

Moyes deploys four players at back, as there is a complete compact, disciplined defensive unit.

The team closes the line between defense and midfield so the opponent struggles to create space and playout wide, where centre-backs can deal with crosses into the box, the team have been playing passive football, as they sit deep to keep mounting pressure on opponents without the ball and making their defensive line up more solid.

West Ham PPDA (Passes Allowed Per Defensive Action) was 16.33, which was the seventh highest in the league. This tells how they are passive without the ball and play with composure at the back.

Under Moyes West Ham have played some attractive counter-attacking football, as they have been extremely dangerous on the counter-attack. Their ball-carrying skills and finishing has been clinical in front of the goal.

West Ham plays counter-attacking tactics under David Moyes and sits back when the possession is lost and defends deep to soak the pressure, this builts pressure on opponents as they lose the ball.

The wide midfielders push the team up to combine with the players down the flank. This gives them more pace for counter-attacking and splitting the opponent’s defense.

Whenever the Hammers are on the attack, the defensive midfielders make a run towards the opposition’s goal, while other players drift into the wide-area creating huge space for the team, and making it easy for players to play with aplomb.

The players have shown drastic improvement under David Moyes, and their game-winning attitude has been rewarding in last season and this season as well.

Moyes has created one of the strongest West Ham sides in recent memory in the Premier League.