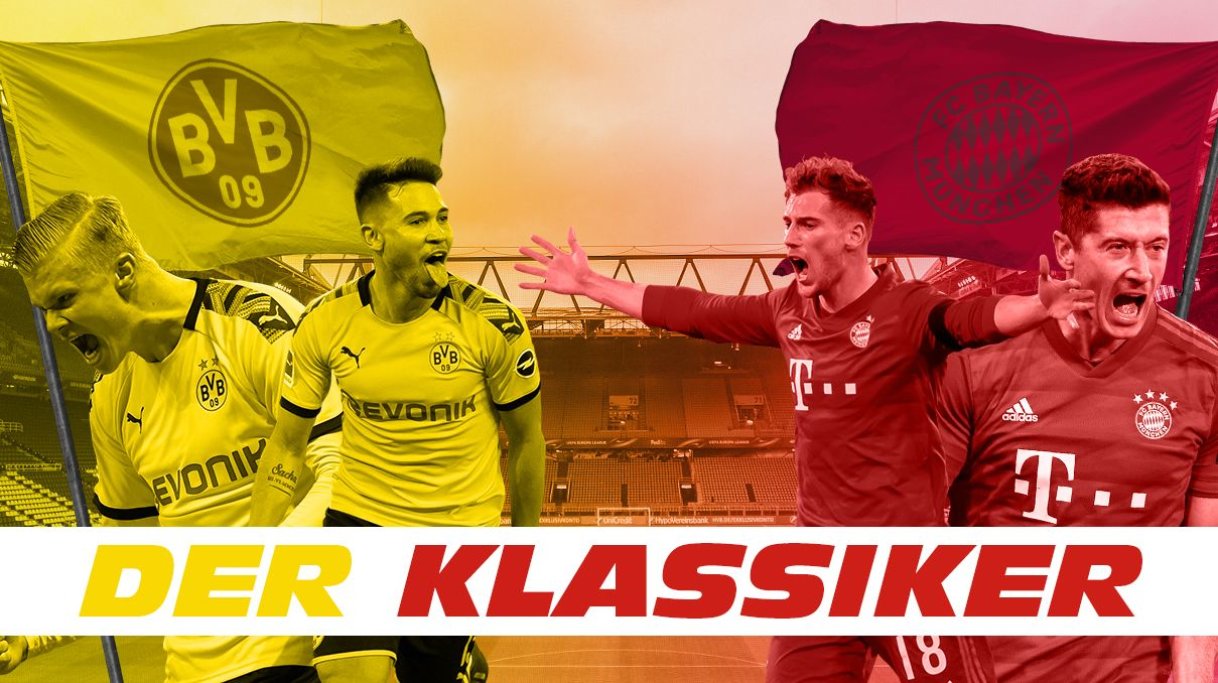 The biggest game in German football, and currently, in the world, is here. League leaders Bayern Munich make a trip down to the Westfalenstadion to take on arch-rivals Borussia Dortmund in the 126th edition of Der Klassiker.

Bayern Munich have historically dominated this rivalry with 59 wins as opposed to Borussia Dortmund’s 29. In the Bundesliga edition of Der Klassiker, the Bavarians have won 48 of 103 meetings with Dortmund’s win tally at 26. Die Borussen have the bragging rights over Bayern Munich in the German Super Cup, winning four in six meetings.

Both teams head into tommorow’s Der Klassiker in blistering form.

Dortmund kicked off the Bundesliga restart with an emphatic 4-0 win over FC Schalke 04 in the Revierderby. They also downed 2008-09 Bundesliga champion VfL Wolfsburg, 2-0, this past weekend.

Lucien Favre’s side have won six in a row in the Bundesliga. They also boast of the league’s best home record with 10 wins, three draws and no losses. Die Borussen have also kept clean sheets in their last four home games.

Hans-Dieter Flick’s Bayern Munich have been phenomenal travelers in the 2019-2020 Bundesliga. Die Roten have won nine from 13 away games, drawn one and lost two. They are also undefeated in their last 13 Bundesliga games.

They have looked solid since the Bundesliga restart, disposing off Union Berlin and Eintracht Frankfurt. The latter did give them a scare via a brace from Martin Hinteregger, but Bayern were able to assert their will and win 5-2 at the Allianz Arena.

Bayern currently sit on top of the league table with 61 points from 27 games. Dortmund are second, with 57 points.

A win for Dortmund will help them cut down the deficit to a point. With Bayern set to face formidable opponents like Bayer Leverkusen and Borussia Mönchengladbach, a win will be a major boost for Favre’s cohorts, considering they have a relatively easier fixture list (except RB Leipzig).

A win for Bayern Munich will give them a seven-point cushion at the top - strong indicator of them winning an eighth consecutive Meisterschale. It would not be wise for an early coronation, however, keeping in mind the opponents they will face.

Bayern Munich have won four of the last six Der Klassiker matches. That stat, however, does not tell the whole story.

Dortmund defeated Bayern Munich in the 2019 German Super Cup as well as the Bundesliga fixture at the Westfalenstadion this season.

In the previous Der Klassiker this season, Bayern Munich ran riot at the Allianz Arena. In what was Hansi Flick’s second game in charge of the club, Die Roten put four past Borussia Dortmund. Robert Lewandowski scored a brace with Serge Gnabry and Mats Hummels (own goal) also getting on the score-sheet.

Favre’s men are in better shape since that drubbing in Munich. It is hard to see them losing in such a fashion this time out.

Marco Reus is the most notable absentee for Borussia Dortmund. The German forward is out with a muscle injury and is likely to miss out on the remainder of the season. Reus has stepped up against Bayern Munich in the past (10 goals and eight assists in 24 meetings) and his output would have been important in getting three points.

A bigger issue for the home side will be Hummels’ availability. The former Bayern Munich center-back was pulled off in the second half against Wolfsburg with an Achilles pain. His status remains doubtful considering the short duration between that game and tomorrow’s Der Klassiker. It adds to the brittleness at the back for Dortmund considering Dan Axel-Zagadou is also out for the season.

On a positive note, Axel Witsel could make his return to the Borussia Dortmund lineup for this game.

Bayern Munich are not without injury issues with midfield maestro Thiago Alcantara likely to miss out. The Spaniard did not play against Frankfurt this past weekend due to an adductor issue. The Bayern faithful will surely miss his composure and playmaking in the midfield.

Had Hummels been fully fit, Dortmund fans would suffer from lesser anxiety while up against the incomparable Lewandowski, who is the top scorer in Der Klassiker history with 22 goals.

As the German is doubtful, Manuel Akanji will have to contend with the Pole. In all honesty, the Swiss defender should be gearing up for an excruciating night in the Ruhr region.

Lewandowski, with 27 goals in 25 league games, is looking to supersede Bayern legend Gerd Muller’s record of 40 goals in a single season. Having found the net in both games since the restart, Lewandowski is still in with a shot to surpass Der Bomber. He also has the backing of his coach in this endeavor.

The Pole has put 18 past BVB in 19 meetings and also provided two assists. He has looked slightly off since the restart but his shooting boots are still there. Akanji will have to be alert in cutting off the supply to Lewandowski in order to reduce his influence.

The Pole will find a way to beat Roman Burki in goal though.

Erling Haaland has been the most potent attacker for Dortmund since his arrival. In this Der Klassiker, Hakimi can prove to be Die Borussen’s trump card.

The Real Madrid loanee is enjoying a breakout season, posting stellar numbers on both ends of the field. Operating as a wing-back in Favre’s 3-5-2 formation, Hakimi has left defenders gasping for breath while whizzing past them with his terrific pace. The Moroccan’s link-up play with Julian Brandt has been especially good as both of them outclassed Schalke’s defense in the 4-0 win.

Bayern Munich can call upon Alphonso Davies’ quickness to match with Hakimi. The Canadian has emerged as one of the most promising youngsters in the world with impressive performances as a right-back. He is, however, a winger converted to a full-back and his defensive game still requires more embellishment.

With Bayern being the dominant side in most games, Davies has not been tested on the defensive end that much. Hakimi can capitalize on this lack of experience keeping in mind that Davies is yet to attain match-fitness since the restart.

Dortmund’s problem area currently is in defensive midfield. Witsel is fit again but it remains unlikely that he will start in tomorrow’s Der Klassiker.

Mahmoud Dahoud has been bang average for Dortmund since moving from Borussia Mönchengladbach in 2017.

On the other end, Leon Goretzka has struggled with injuries but is constantly improving. In the last two games, he’s played in a more advanced role and his performances have gotten better. He scored against Frankfurt and moved the ball well in the win over Union Berlin.

With Thiago most probably out, Goretzka might have to sit deeper but will be looking to advance when the opportunity arrives. With Dahoud his opposite number, those opportunities might be plentiful. You can expect Goretzka to make his mark in this matchup.

Borussia Dortmund were 3-2 winners in this fixture in the 2018-19 season. They also beat Bayern 2-0 in the German Super Cup early this season.

That being said, they’ll be missing out on one of the strongest x-factors that the Westfalenstadion brings – the fans.

Die Gelbe Wand (The Yellow Wall) has been a difference maker for BVB but the complications from the coronavirus pandemic will nullify that.

This plays into Bayern Munich’s advantage as the tie’s balance tips in their favor. The Bavarians have better individual talents and have been playing some inspired football since Flick took over.

I see tomorrow’s Der Klassiker as a potential thriller with both teams playing at a high level. Looking at the high-scoring matches these two produce, I see at least three goals being scored with Bayern Munich leaving the Ruhr region with three points in the bag.