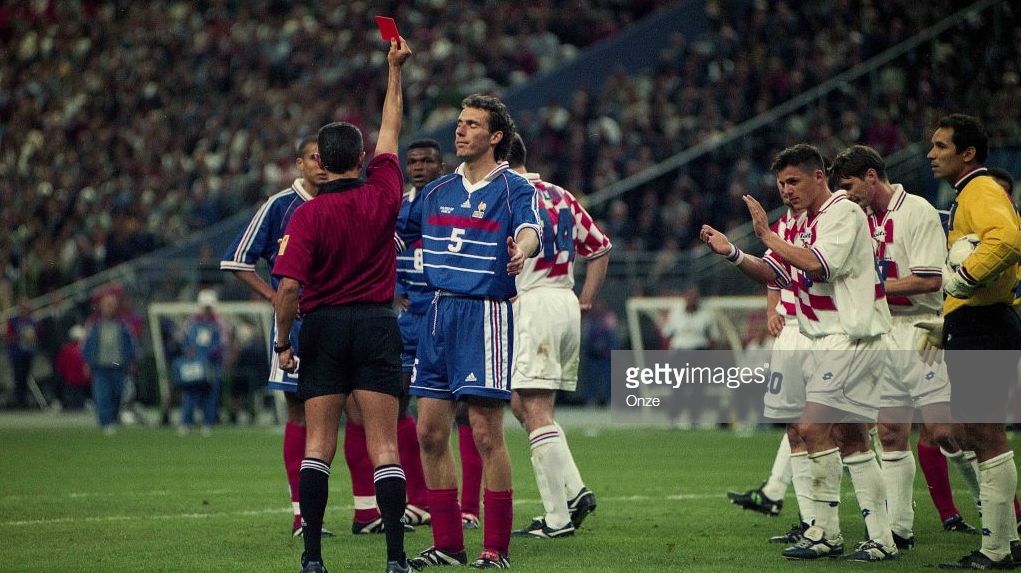 We take a look at the five most controversial red card decisions in football history.

Robin Van Persie was sent off for a second bookable offence in the second half of Arsenal's last-16 match against FC Barcelona in the 2010-11 season of the Champions League, having kicked the ball away after been flagged for offside. The Dutch striker insisted that he did not hear the referee's whistle over a vocal Camp Nou crowd, and that he was just taking a shot, having not realised his infringement, while Arsene Wenger also reacted angrily. Arsenal went on to lose the match 3-1, going out 4-2 aggregate after winning the first leg of the tie at the Emirates.

One of the most infamous sending off incidents in World Cup history came in the 2006 tournament, when Australian-born Croatia defender Josip Simunic was shown three yellow cards by English referee Graham Poll. Simunic should have been sent off in the 90th minute of the match when Poll booked him for the second time, but the defender's Australian accent confused the official, as he had noted Australia 3 (Simunic's shirt number) in his notebook, leading him to believe that the defender had not already received a yellow. However, Simunic could not keep his cool, arguing with Poll at full time to earn himself a third yellow card, this time seeing red. The match ended in a 2-2 draw, which was enough for Australia to progress to the knockout stage at the expense of the Croatian side.

The incident between Costa and Gabriel is not the first red card controversy between Chelsea and Arsenal, as Kieran Gibbs was wrongly sent off for a handball offence at Stamford Bridge during the 2013-14 season. There was a clear handball to deny Eden Hazard, but referee Andre Marriner misidentified the culprit, not realising that it was Alex Oxlade-Chamberlain who punched the ball away, rather than his teammate. Despite the midfielder telling the referee that he was responsible rather than Gibbs, it was the defender who was given his marching orders, with Chelsea going on to win 6-0, although the red card was later rescinded.

Kaka was left stunned at the 2010 World Cup in South Africa when he received a second booking for a foul on Ivory Coast's Abdul-Kader Keita, earning the Brazilian playmaker his first career red card. Replays showed that Keita simply ran in to Kaka, who had his back to the Ivorian, before falling to the ground clutching his face in agony, convincing the referee that he had been fouled. Despite footage of the incident clearly showing that Kaka did not lash out, he still had to serve a suspension because his dismissal was the result of a second booking, resulting in him missing the goalless draw with Portugal in their final group stage match.

Laurent Blanc had been one of France's most influential players during their success at the 1998 World Cup on home soil, but the defender missed the final against Brazil after being sent off in the semi-final against Croatia. Blanc was dismissed for an apparent elbow on Croatia defender Slaven Bilic, but replays showed that the now-West Ham United manager feigned the injury, clutching his face without actually being struck by the Frenchman. Both defenders went on to manage their national sides, and played a friendly in 2011, during which Bilic reiterated that he had been struck by Blanc, who now manages Paris Saint-Germain. However, the footage of the incident suggests that Blanc was simply attempting to wrench his shirt free of Bilic's grasp. Despite appealing against Blanc's suspension from the final, France had to face Brazil without the defender, but went on to win the match 3-0.