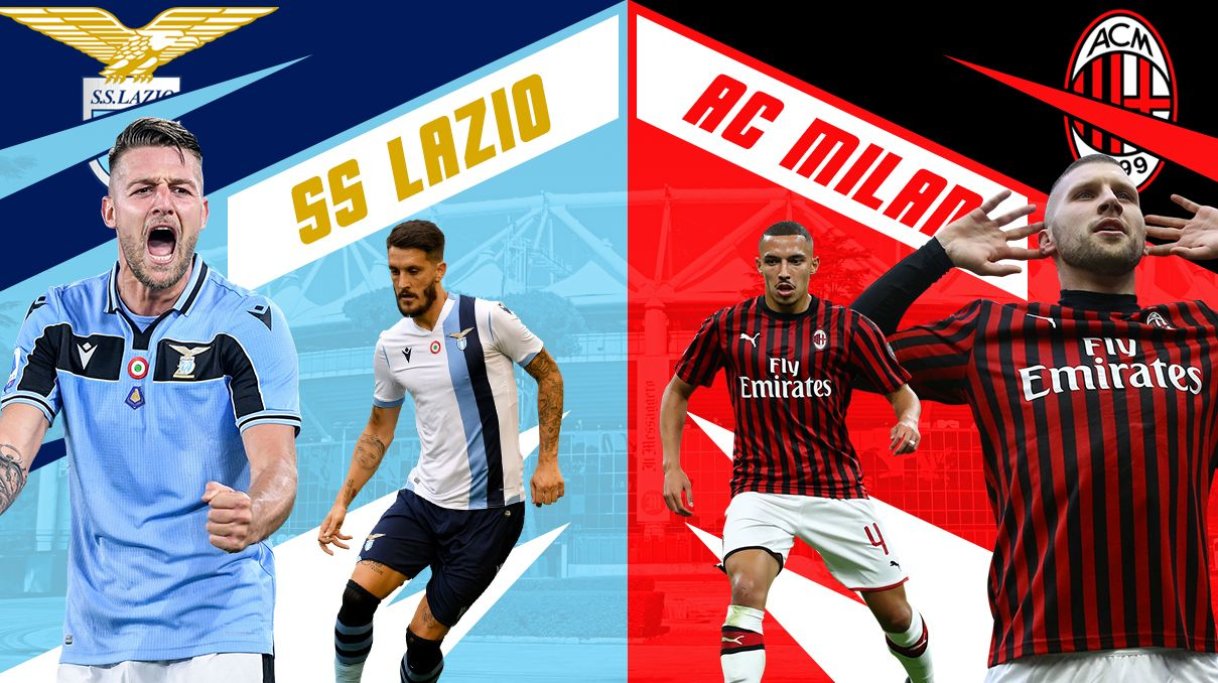 SS Lazio vs AC Milan: Serie A Preview and Prediction

Stefano Pioli’s Milan face a difficult challenge as they travel to Rome to play scudetto contenders Lazio on Saturday night.

AC Milan will be looking to avenge the 2-1 defeat Simone Inzaghi’s side inflicted on them earlier in the season.

Lazio have had a brilliant 2019-20 season which has seen them embark on a title charge. I Biancolesti also managed a 21-game unbeaten streak that was ended by Atalanta.

Since then Le Aquile have been somewhat struggling to find their form but have still earned marginal victories against Fiorentina and Torino.

Milan have not been playing their best football for a long time and it is something everyone is aware of. Inconsistent managerial changes have played a big part too accompanied by some poor signings. They have, however, resumed the Serie A in much better shape and performance, earning victories against Lecce and AS Roma.

Milan then struggled again to beat the virtually-relegated SPAL, drawing 2-2, increasing their problems as they hold on to the final Europa League spot although the likes of Hellas Verona, Cagliari and Parma are only a few steps away from them.

Both teams have seven wins each with 11 draws out of the last 25 games played. However, Lazio edge the battle in the last five games played between the two, winning twice and losing only once.

AC Milan have drawn 59 Serie A games against Lazio, more than against any other opponents in the competition. However, a Lazio double which seems less likely but possible will be the Rome based club's first double over AC Milan since the 1977-78 season.

Recently, it is quite evident that Lazio are not playing their best football. Their loss against Atalanta not only ended a 21-game unbeaten streak but also hurt their chances of claiming the scudetto. An interesting fact is that Lazio are still unbeaten at the Stadio Olimpico this season in Serie A.

Milan have had a similar restart as well. They won their first two games which were comparatively difficult but failed to beat a side battling relegation. SPAL were 2-0 up for the majority of the game and played the final-half of the game with ten men. They did well but were struck by two late goals by AC Milan out of which one was an own goal.

For Lazio, Senad Lulic, Luiz Felipe, Lucas Leiva and Bobby Adekanye are all going to this game due to injury. However, the bigger concern for Inzaghi would be the lack of players up front. Serie A top scorer Ciro Immobile and Felipe Caicedo are both suspended and that leaves Joaquin Correa as the only striker available.

Andre Anderson or Luis Alberto could suffice and there also have been rumors about the center back Bastos starting up front.

Milan, on the other hand, will have to manage without defenders Leo Duarte and Mateo Musacchio. Zlatan Ibrahimovic missed the first two games after the suspension but came on for 25 minutes in the draw against SPAL which means he will feature in this game.

Spanish attacking midfielder Alberto has been in the form of his life, scoring five goals and assisting 14 in the Serie A this season.

He is set to go head to head with Hakan Calhanoglu, who has been instrumental in Milan's struggling midfield this season. He has managed to score four and assist three in the Serie A this season.

Calhanoglu has definitely shown his potential this season if not the numbers. Alberto is miles ahead in the goal contributions and accurate passes but Calhanoglu can still emerge as the underdog in the game.

While Lazio are almost out of the scudetto race, only a spectacular performance will get them the three points. However, lack of options upfront would hurt Le Aquile while attacking and the Rossoneri are expected to make good use of it.

The striker battle will be top-notch as both the players have almost the same numbers.

Correa has seven goals and an assist while Rebic has fired eight goals and is yet to set up a teammate.

However, Correa has played seven more games than Rebic and that may give the loanee some hope as he will be preferred over the veteran Zlatan Ibrahimovic.

Correa has better passing abilities, dribbling and interceptions while Rebic is more accurate with his crosses and tackles. The Argentine edges the Croat in clearances but Rebic's goal per minute ratio and shots per game numbers are superior.

The Lazio duo up front missing the game will be a huge blow as both are the top two scorers of the team. Correa will be under tremendous pressure as he will have to take the entire responsibility of helping the team to start well.

Milan will be hoping to make good use of the problems Lazio are having. With Rebic and also the option of Zlatan being available, Milan are expected to do well.