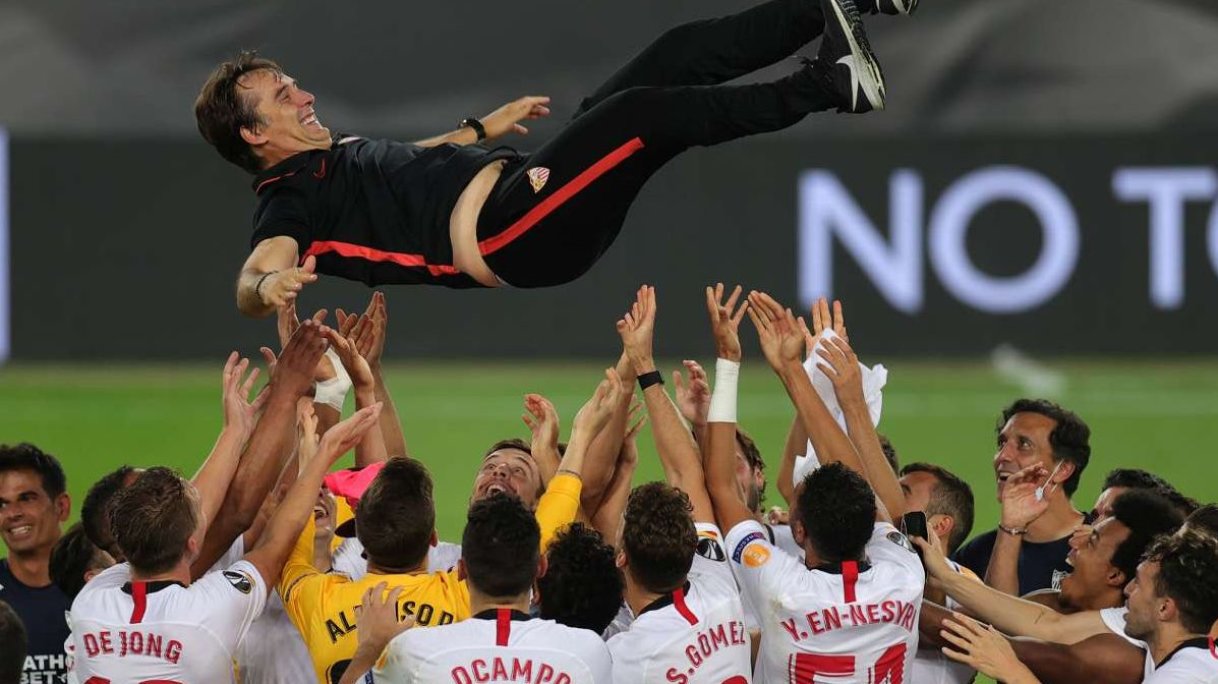 Julen Lopetegui and Monchi: The brains behind Sevilla's success

Sevilla notched up their sixth Europa League title on Friday night beating Internazionale 3-2 in a thrilling contest at Cologne's RheinEnergieStadion. Yet behind this unprecedented success exist two brains that created the recipe for such a winning formula under trying circumstances.

Coach Julen Lopetegui and sporting director Monchi have developed a deep bond that has truly given the Los Nervionenses the ideal platform to compete with Real Madrid and Barcelona for the Spanish La Liga title in the coming season.

An unceremonious sacking as the Spanish national team's boss and then being shown the door at the Santiago Bernabeu after just 14 games in charge. Lopetegui, in 2018, was a man beset by troubles.

The Spaniard recharged his battery for a year and Sevilla came calling and Lopetegui signed a three year contract in June 2019.

No one can deny the 53 year old's credentials as a football coach or manager. His two year stint as Spanish boss saw the team remain unbeaten and produce some excellent results in that period. It is a question of ifs and buts as to whether Spain would have fared better in Russia with Lopetegui at the helm. It is all part of destiny one can assume.

In addition to the unwanted sacking as the national team boss on the eve of the team's opening clash against Portugal, Lopetegui found himself suddenly in the thick of Real Madrid's pressure cooker environment. If replacing the legend Zinedine Zidane in the Santiago Bernabeu dug out was a tough job in the first place, managing Los Blancos' ego-filled locker room proved too much for the soft spoken manager. A crushing 5-1 defeat to eternal rivals Barcelona brought the curtains down on a truly forgettable period.

A year away from football seemed to have done a world of good for the former Spain U-21 boss. In June 2019 Sevilla saw a silver lining in appointing him as the club's new manager. Los Nervionenses have a unique football management hierarchy that has kept the club among Spain's elite for a number of years now having the services of a brilliant group of players at an acceptable budget.

The dynamics of football management at the Ramon Sanchez-Pizjuan Stadium are such that the manager of the club can concentrate on the training of players and tactical set up of the team. The transfer and recruitment matters are left to the club's sporting director in consultation with the manager.

Since being appointed as the manager, Lopetegui could concentrate on his managerial and coaching skills while the sporting director provided him with the players that he sought for to make Sevilla successful. If qualifying for the Champions League after coming fourth in La Liga is to be rated as a successful season for the Sevilla manager, winning the Europa League on Friday night could be considered the moment when finally Mr. Lopetegui gets over the football demons of the past couple of years.

Tears of joy were shed on the night by the much maligned football manager as his triumphant players lifted him in the air on an otherwise surreal looking deserted RheinEnergieStadion.

Not many people would want to remember the year 2020 except for Lopetegui for whom the year is proving to be some kind of redemption after two big failures. He will remember Cologne fondly for years to come as he lifted the first silverware of his managerial career.

Monchi, the star behind Sevilla's success

Ramon Rodriguez Verdejo or Monchi, as he is commonly known in Spain and the footballing world, has been with Sevilla since childhood. Having retired as a player at the tender age of 30, Monchi was instantly appointed as the club's director of football in 2000. His immense knowledge of grassroots football in Spain and a brilliantly set up scouting team have set him apart as a sporting director.

Monchi has been attached to Sevilla virtually all his life except for a couple of seasons when he went to AS Roma in the same role (2017-2019). Yet in 2019 the 52 year old returned to his home and subsequently helped Sevilla and Julen Lopetegui qualify for the Champions League and win the Europa League for a record sixth time.

With the best part of twenty years behind him as a club's sporting director, Monchi has developed a tremendous scouting profile based on deep research and an uncanny knack to spot future talents. Sevilla's scouting team is spread across the world.

The team keeps track of upcoming talents minutely and there have been instances when in youth championships in the respective continents, Sevilla has been the only club from Europe scouting talent. The brilliance of this man can be presumed by the simple fact that he not only buys well but also knows the value of selling at the right time.

The Monchi model can be best described by the club's bulging financial reserves even in this unprecedented time of the Covid-19 pandemic. Following the club's financial crisis in the late 1990s and club's relegation to the second division, Monchi's appointment as sporting director turned the tide for the club.

From a budget of €18 million in 2000, the club's annual budget for the year 2019-2020 has increased to a mammoth €384 million. The success of a big club like Sevilla depends on all departments but none more so than recruitment and transfers. Monchi has virtually single handedly turned the club's fortunes with his brilliant talent spotting and ability to get great value on transfer dealings

Monchi and his scouting team buys raw talents from South America and Europe, invests in them and makes them perform at the big stage. When the right time arrives for making handsome profits against those investments, the team and the club do not look back in selling the prized assets.

The money generated from the deals is then reinvested again on replacements and the cycle continues. This is the basic Monchi model that has seen so many players come to Sevilla considering the club as a gateway to dream deals in the near future.

Plenty of big names signed by Monchi and Sevilla over the years went on to play for bigger clubs across Europe. Names such as Sergio Ramos, Jose Antonio Reyes, Ivan Rakitic, Freddie Kanoute, Dani Alves, etc, were groomed by the club before embarking on further challenges. The club's strategy regarding transfers are such that it does not miss out on the big money that is on offer for the sale of a particular player.

It also has an edge while signing the best raw talents from across the globe at meagre prices as per its terms.

“The word ‘Sevilla’ opens doors with agents and with families,” said Emilio de Dios, the club’s technical secretary, in an interview to New York Times adding, “When you can show them our internal system with 25 reports on them, each of them Grade A, they know that we are serious.”

In order to keep the demanding Sevilla supporters happy the club does not make it look like a 'selling' or a 'feeder' club but it has a tremendously hard working and smart recruitment team that is always ready with able and profitable replacements for the departing players much earlier to prepare for the contingencies as and when they arise.

Even the current team has a plethora of talents that would now cost a lot more than what they were bought for just a year ago by Monchi. Players like Lucas Ocampos, Jules Kounde, Oliver Torres, Luuk de Jong, Diego Carlos, Joan Jordan, etc, are already European winners and these players could lead them to another successful 2020-21 season.

Yet when the right time arrives for making the best deals out of these players Sevilla will sell the players but, rest assured, able replacements would be ready far earlier than the sale itself.

How new coach Lopetegui was helped by the returning Monchi

Since arriving back at the club from AS Roma, Monchi was tasked with finding a new manager or head coach and he decided to give the former Spain national boss a chance to work at the club. What the sporting director understood that many fellow Spaniards in the football federation failed to is the simple fact that Lopetegui is a fine manager given the requisite confidence and freedom to work.

First and foremost Monchi took away the pressure of overhauling a struggling club from the new manager and just asked him for the sort of players he would require for his tactical system to work.

“If he says he wants a defender who is tough, then I go to the list and say of these 10, six have this characteristic,” Monchi said.

Lopetegui was signed in June 2019 and by July 2019 the scale of Monchi's overhaul was crystal clear. Sevilla had signed 12 players for a combined cost of around €100 million in fees. All these 12 players have now played important roles in helping the club and Lopetegui win the Europa League and qualify for the lucrative Champions League. The cost has truly been recovered within a year of shrewd investment.

In addition to this a fine football manager has somehow found a foothold in his quest for redemption and further success in Andalusia with the help of the brilliant Ramon Rodriguez Verdejo or Monchi.