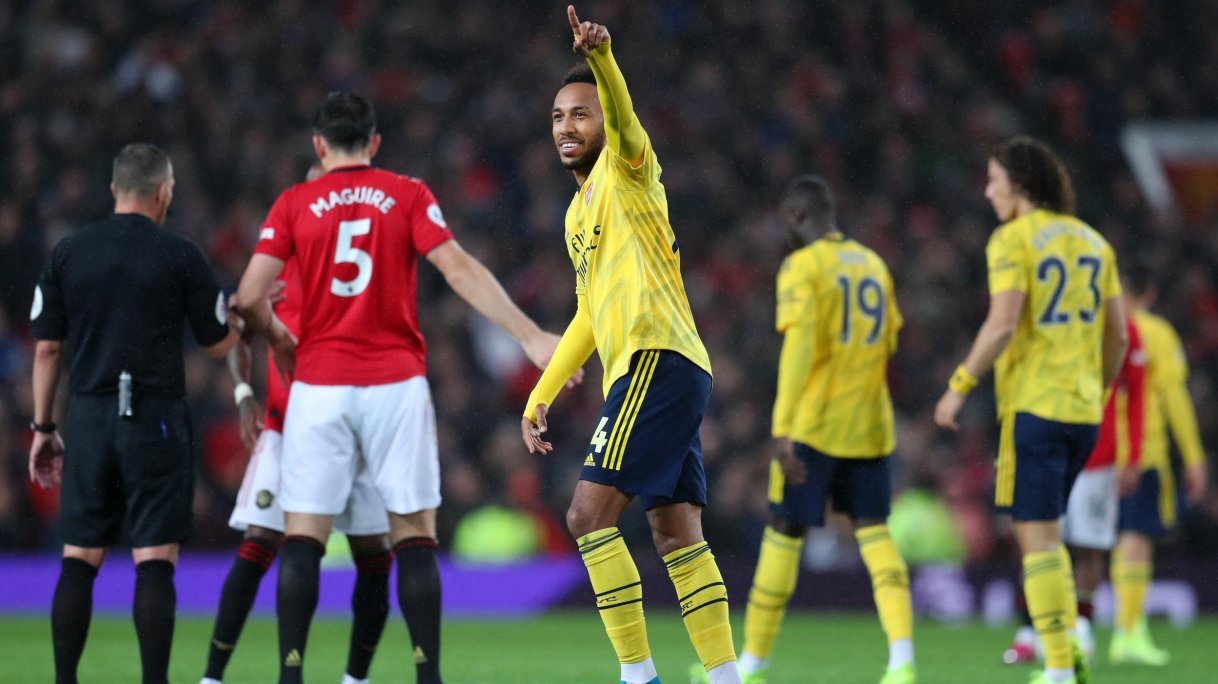 It was hardly a classic and neither was it close to the quality of games when Manchester United played Arsenal in the early 2000s.

The two former behemoths of English football played out a 1-1 draw at Old Trafford in a game that served to highlight how low they’ve fallen from the Premier League’s summit.

The clash was marred by sub-standard officiating, unimaginative play and conservative strategies. Still, there were flashes of brilliance from the youngsters in both teams which keeps the hope alive for both clubs.

The first half saw little in terms of offensive action with the hosts being marginally better.

Andreas Pereira created space for a shot after a mazy run but it was turned away by Bernd Leno.

The deadlock was broken in the 45th minute itself via a scintillating Scott McTominay strike. Following Manchester United’s counter-attack, McTominay received the ball from Marcus Rashford on the edge of the box. The Scottish midfielder tried one out from range and the ball went into the top right corner. It was a magnificent strike from the Manchester United Academy product.

The trailing Gunners responded strongly in the second half.

Lucas Torreira got into the box and shot off a Pierre-Emerick Aubameyang cross. The Uruguayan midfielder did not hit the ball at the sweet spot and David de Gea collected it easily.

Unai Emery’s side, however, kept the pressure on and it paid dividends near the hour mark.

Bukayo Saka, who gave a strong showing, intercepted Axel Tuanzebe’s misplaced pass. The Arsenal teenager found a rushing Aubameyang in open space who found the net in a one-on-one situation.

The goal, however, was originally not given as Aubameyang was erroneously deemed offside by the linesman. A VAR check confirmed that the Gabonese was easily onside and the goal stood.

The hosts started dominating proceedings again after the 70th minute. They came close again via McTominay who headed above the goal off a wrongly awarded corner.

Both teams, however, were unwilling to take major risks up front and it was no surprise that the game ended in a 1-1 draw. None can argue that it was an unfair result, considering the lack of initiative from Emery and Ole Gunnar Solskjaer’s men.

This is exactly what VAR is for

As you can see in the image above, Aubameyang was comfortably onside before scoring the goal.

How the linesman did not spot this is beyond my understanding.

Had the goal been disallowed due to an officiating howler, it would have been a scandal.

VAR is needed to rectify errors like this and there can be no complaints of the goal being awarded. It was an absolutely correct decision.

There were protests from Manchester United’s defenders that Aubameyang being flagged offside caused them to ease off due to which he scored the goal.

That being said, the officiating in this game was strewn with errors.

The hosts nearly scored off a corner that shouldn’t have been awarded to them in the first place. Replays clearly showed that the ball ricocheted off Daniel James’ leg past the line but Friend thought it hit Sokratis instead. He later awarded Arsenal a goal-kick that should have been a corner for the Red Devils.

The decision to caution Jesse Lingard was also harsh. While the Englishman did commit a foul on Matteo Guendouzi, it was not reckless or intentional. Lingard was unlucky to get in the books for that one.

Nicolas Pepe and Harry Maguire made headlines this summer with their ginormous price tags. Both players cost north of £70 million and became club record signings respectively.

Such marquee players are expected to influence big games like this. Instead, both Maguire and Pepe were well below the standard.

The Ivory Coast winger created spaces for himself to shoot but the end product was severely lacking. His shots lacked venom and his decision-making was off.

Maguire was brought in to provide defensive stability but was one of the culprits behind Aubameyang’s goal. He was miles behind the Gabonese forward, playing him onside.

Both Pepe and Maguire need to improve their performances or the pressure associated with such huge price tags will get bigger.

Young players shine; all except one

Arsenal’s best players on the pitch last night were Guendouzi and Saka.

The Frenchman, on the back of his performances, has become an undisputed starter in Arsenal’s midfield. Last night, he was his usual energetic self, challenging for the ball and helping his defense out.

Saka, who announced himself with a wonder strike against Eintracht Frankfurt, tormented Manchester United’s defensive unit. He was duly rewarded with an assist when Aubameyang converted off his pass.

For the hosts, McTominay and Daniel James shone throughout the 90 minutes.

The Scot scored a scorcher of a goal and nearly got another. His work in the midfield was a cut above the rest as he combined well with Paul Pogba to keep the pressure on the visitors.

James’ pace was highlighted early and it was his weapon against the Arsenal backline. The Welsh winger looked comfortable in taking on the Gunners’ defenders but was unfortunate to not be ably supported by his full-back, Tuanzebe.

That being said, Rashford, who rose to prominence with goals against Arsenal, was one of the worst players on the pitch. He was unable to capitalize on strong attacking opportunities and his decision-making was befuddling.

The English forward has not been in his groove since a long time. Manchester United’s limited options in attack means that Solskjaer has no other replacements for the underperforming Rashford. The Red Devils need a major fix up top.

The former Borussia Dortmund man has lit up the Premier League ever since his introduction in 2018.

Incredibly, only Mohamed Salah has matched Aubameyang’s goal tally in the league since the latter’s Premier League debut. Both have found the net 39 times in that duration.

The Gabonese forward is leading Arsenal by example. To not build a stronger side around him in the next two years would be a big failing on the part of the Arsenal management.

A deserved result but the Gunners are better off

As mentioned previously, both Emery and Solskjaer lacked the bravado and adventurousness needed to win games like this. Both were unwilling to take risks and seemed content with a draw.

Sharing points has been more favourable for the Gunners as they’re back in the top four. For Manchester United, it has hardly made a difference as they’ve only moved up one spot in the table.

This result, and mindset, highlight how far behind both clubs are behind Manchester City and Liverpool. It’ll be a long time before both clubs can emerge as credible challengers for the title.