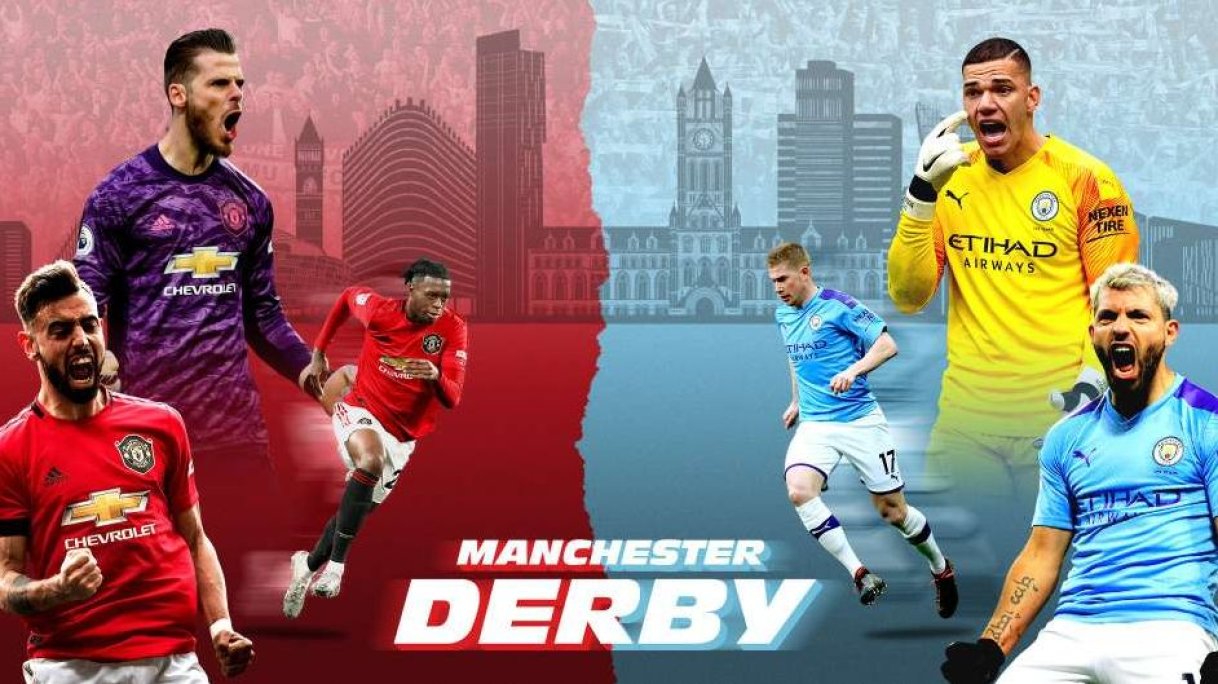 Manchester is red or blue? The bragging rights of the city are up for grabs as defending champions Manchester City travel to 'The Theatre of Dreams' to take on Manchester United.

The 182nd edition of the derby does not carry much weight this time around as both the clubs are out of the title race. But, both the clubs still need to finish in the top four and a crucial three points are at stake.

Manchester City juggernaut has ultimately stopped this season as the two times defending champions are set to be dethroned by Liverpool. However, they still possess a devastating squad, who are capable of destroying any team on their day.

The Citizens sit second in the table, with 57 points to their name. They have won 18 matches out of 27 and are 15 points ahead of their local rivals.

The Red Devils are vying for one of the Champions League spots as they don’t possess a menacing squad, which would send shivers down their opposition’s spine.

Ole Gunnar Solskjaer’s side is fifth in the table with only 11 wins out of their 28. But this season, they have dominated this fixture with two wins to one.

For Ole’s side, the dynamic duo of Marcus Rashford and Paul Pogba are out of this crucial clash. Aaron Wan-Bissaka and Daniel James are fit to start after missing the midweek FA Cup fixture.

Aymeric Laporte is again injured and City would miss his services. Apart from him, Leroy Sane is still not match fit and star-man Kevin De Bruyne is a doubt.

Anthony Martial and Marcus Rashford were on target as the Red Devils ran over City with aplomb. Defender Nicolas Otamendi scored a consolation goal for the Citizens late in the game.

Shaw has improved tremendously over the course of the season and will be given the task to stop the marauding Mahrez. If he comes out of this battle with flying colours, his 2020 Euro chances will increase manyfolds.

The English left-back has started 13 matches this season and has raked in some impressive numbers.The 24-year old would have to stick with Mahrez as the Algerian won’t need second invitations to hurt them.

Mahrez has been impressive of late and has been one of the first names on the City’s team sheet. The Algerian, more often than not, comes up with match defining contributions and Pep Guardiola would want to get him more involved in the final third of the pitch.

The 2015-16 Player of the Year has unparalleled vision and his dribbling ability is second to none. Luke Shaw will have his hands full if Mahrez comes into his own.

These two were on the scoresheet the last time these two clubs faced each other in the Premier League and they would want to do an encore of that performance. This will be a crucial battle as City without Laporte is susceptible to a few goals.

Martial has shouldered the responsibility of being the primary attacker amazingly well this season. He has gelled well with both Marcus Rashford and Mason Greenwood and is having his most fruitful season in years.

Otamendi, on the other hand, has formed an effective partnership with Fernandinho after an unfortunate injury to Laporte at the start of the season. He is averaging 3.3 clearances per game this season and this attribute would come in handy away from home.

The Argentine has vast experience and great ball playing ability, which he would use to start City’s attacks. Otamendi boasts of a pass success percentage of 92.4, which is even better than some of the talented midfield generals in the league.

In an unusual stat, the home team has failed to win seven out of the last eight matches in this fixture. If the Red Devils fail to win this one, they would lose four consecutive home derbies for the first time since February, 1931.

Ole’s side is undefeated in 11 of their last 12 home matches in the league and they could do the double over their rivals for the first time in a decade.

Both these sides have form on their side as United are unbeaten in their last nine matches in all competitions, whereas, City have now won five in a row. But, the away team has an edge in this fixture recently and we predict a City win.