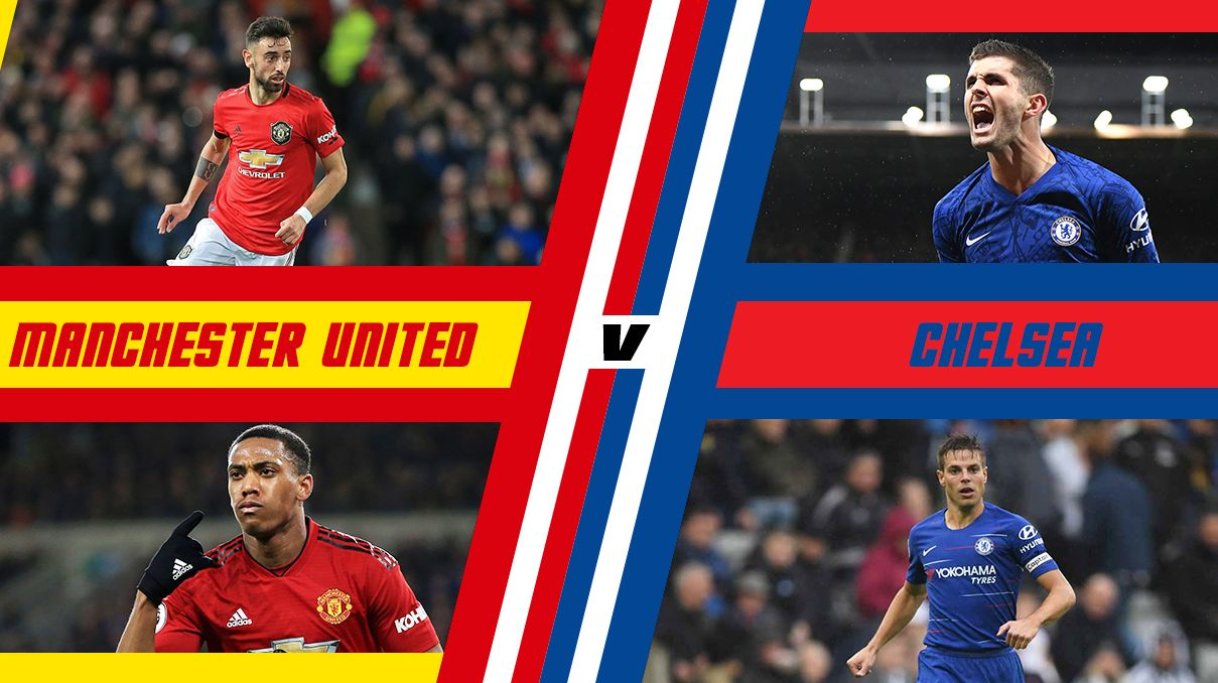 Two English giants, two club legends and a place in the 2019-20 FA Cup final at stake. Despite the lack of fans at Wembley, the FA Cup semi-final between Manchester United and Chelsea promises to be an intense game.

The winner of this game will face Arsenal who registered a surprise (but deserved) win over Manchester City last night.

Manchester United and Chelsea are also in the top-four race in the Premier League so there is a possibility that both Ole Gunnar Solskjaer and Frank Lampard could rest some of their starters. With both sides still in the Europa League and Champions League, this is not the only trophy available for the taking.

Manchester United have been in scintillating form since football restarted in England. The Red Devils are unbeaten for an eight-game stretch since the restart, winning six and drawing two. The draws were against Tottenham and Southampton.

Chelsea have posted a record of seven wins and one loss in the eight games since football resumed. Their most notable win was definitely against Manchester City where the Blues’ win mathematically made Liverpool the 2019-20 Premier League champions.

Solskjaer’s men were 2-0 victors at Selhurst Park in the last match that they played. Both Anthony Martial and Marcus Rashford found the net to get an important three points.

Chelsea too won their last fixture – a 1-0 win over Norwich City. The game turned out to be harder than both Lampard and Chelsea fans would have liked but Olivier Giroud’s first half goal proved to be the difference-maker.

Manchester United have already done a league double over Chelsea this season. The Red Devils started their 2019-2020 campaign by hammering Lampard’s men, 4-0.

Solskjaer handed Lampard another league defeat back in February. Martial and Harry Maguire scored to secure three points for the Red Devils at Stamford Bridge.

The Red Devils’ dominance over Chelsea is not only limited to the league. They also knocked the Blues out of the Carabao Cup this season with a 2-1 win.

That win was United’s revenge for the loss in the 2018 FA Cup final which was also Antonio Conte’s last game in charge of the Blues.

There are doubts over Luke Shaw and Brandon Williams’ fitness for this semi-final. Both players did not feature in the win over Crystal Palace. Shaw, however, has a better chance of recovering for this game than Williams.

Chelsea will be without N’Golo Kante and Billy Gilmour. The former is facing hamstring issues that have limited his game time and the latter is out for a few months due to a knee injury.

Martial is enjoying his best season with Manchester United so far. The Frenchman has finally found the consistency he so lacked in previous seasons.

Martial has scored six goals and assisted three in the Red Devils’ last eight games. His finest performance was against Sheffield where he scored his first hat-trick for Manchester United.

Martial has become a serious threat both inside and outside the box and Antonio Rudiger is going to have troubles in containing the French forward.

Rudiger has not had a great season and his shaky form is not doing any good for an already weak Chelsea back-line. The German defender will have to be more alert in this game. He could take a cue from how David Luiz has improved after the debacle at the Etihad.

Martial likes to drift to the left and then move back to the middle. Rudiger will be aware of the Frenchman’s tendency to curl in shots with his right foot and preventing him from switching to his dominant foot might help Chelsea’s cause.

The Englishman has been on a great run since the restart, scoring three and assisting three. He has scored thrice and assisted one in United’s last two games. He also scored from a brilliant free-kick in United's win over Chelsea in the Carabao Cup.

Chelsea captain Cesar Azpilicueta has the unenviable job of holding together an error-prone and inexperienced defensive line. The Spaniard too has his off-days but he can also be a match-winner.

Checking Rashford’s overlapping runs on the wing will be high on Azpilicueta’s priority list and he’ll need his teammates to deal with Martial and Fernandes too in order to blunt Manchester United’s attacking unit.

While Manchester United’s offense has been on a tear, their defense has left a lot of questions to answer. Aaron Wan-Bissaka, however, is not one of the culprits for those failings at the back.

One of the finest tacklers in England, Wan-Bissaka is an expert at shutting down wingers but Christian Pulisic will be a hard nut to crack.

‘Captain America’ has led Chelsea’s offensive charge since the restart and is showing why he deserves to be a starter for the Blues next season despite the high-profile arrivals of Hakim Ziyech and Timo Werner.

Pulisic’s superb dribbling and decision-making make him a potent threat on the left wing. He can dribble and move inwards, invite tackles and win penalties – like he has done in the league. He can also move outwards and deliver accurate crosses like the one against Norwich.

Lampard will be looking at the American to provide the spark up front and Wan-Bissaka is likely to be on his toes throughout the 90 minutes.

Manchester United’s sheer dominance over Chelsea and their blistering form since the restart makes them favorites for this game.

Unless Solskjaer decides to rest key players like Martial, Rashford and Fernandes, I see United getting a hard-fought win over the Blues.

Both sides have shown frailty at the back but United edge out Chelsea in the attacking department. That being said, Pulisic, Willian and others will give Man Utd’s defensive line a whole heap of work to do.