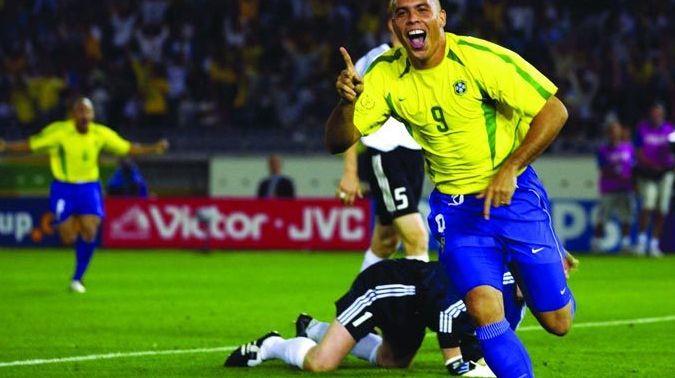 Most Valuable Players of the 2002 FIFA World Cup

2002 was the year when the World Cup finally reached Asia. In South Korea-Japan, Brazil reclaimed their crown as World Champions after defeating Germany 2-0 in the finals.

Brazilian stars like Ronaldo, Rivaldo, Cafu etc. were amazing performers but there were other nations which also gave some legendary players. Here are the MVPs of the 2002 World Cup:

Till date, Oliver Kahn is the only goalkeeper to win the World Cup Golden Ball.

Kahn’s magnificent goalkeeping helped an average German side to over-achieve and reach the World Cup finals.

With Kahn in goal, Germany only conceded three goals in the entire World Cup. Two of those goals came in the final.

One of his finest saves was against South Korea in the finals where Kahn denied Lee Chun Soo’s driving shot. The save proved crucial as Germany defeated South Korea 1-0 to advance to the finals.

The legendary Brazilian striker came to the 2002 World Cup after a lengthy layoff due to injury. There was some doubt whether Ronaldo was the same player as he was in 1998, but O Fenomeno dispelled all doubts, scoring eight goals in the tournament.

The most impressive record that Ronaldo set while playing in this tournament was that he scored in each game except the quarter-finals. He also shed his nightmares from 1998 as he scored twice in the final against Germany to give Brazil their fifth World Cup title.

Ronaldo’s tally of eight goals was good enough to bring him the Golden Boot award. He also won the Silver Ball at the tournament.

USA exceeded all expectations at the 2002 World Cup as they progressed to the quarter-finals. A key component of that excellent side was Landon Donovan.

The 2002 tournament saw Donovan, who was tipped to be a star for US Soccer, burst to life. He starred in US’ 3-2 upset of Portugal in their opening game as Donovan’s cross was deflected by Jorge Costa to give US a two-goal lead.

Donovan scored his first goal in the World Cup in the 3-1 loss to Poland. His best moment, however, came in the Round of 16 against arch rivals Mexico where Donovan scored a header to help the US advance.

For his superlative performances, the then 21-year old was named the Best young player of the 2002 World Cup.

South Korea’s success in the tournament on home soil because of a solid defensive line and Hyong Myung-bo, the inspirational captain, was the stalwart.

Under Myong-bo’s leadership, South Korea advanced to semi-finals, surprising fans around the world. Myong-bo was faultless at the back as he marshalled an impressive South Korean backline which allowed his team to scalp big teams like Poland, Portugal and Italy en route to the final four.

For his brilliant performances at the back, Myung-bo was given the Bronze Ball. Till date he remains the only Asian player to be named in the Top-3 players at a World Cup.

While Rivaldo was widely condemned for his simulation incident, it should not take away from how good he was at the 2002 World Cup.

Scoring five goals, he shared the silver boot with Miroslav Klose. Rivaldo’s influence, however, was more than just goals as he also played creative role in the entire tournament.

The former FC Barcelona forward’s best performance came in the Round of 16 against Belgium where he scored a magical goal. Rivaldo controlled a lofted ball from Ronaldinho, turned and volleyed the ball from outside the box to score.

Rivaldo’s overall game during the tournament was so good that Brazil coach Luiz Felipe Scolari called him the best player of the tournament.