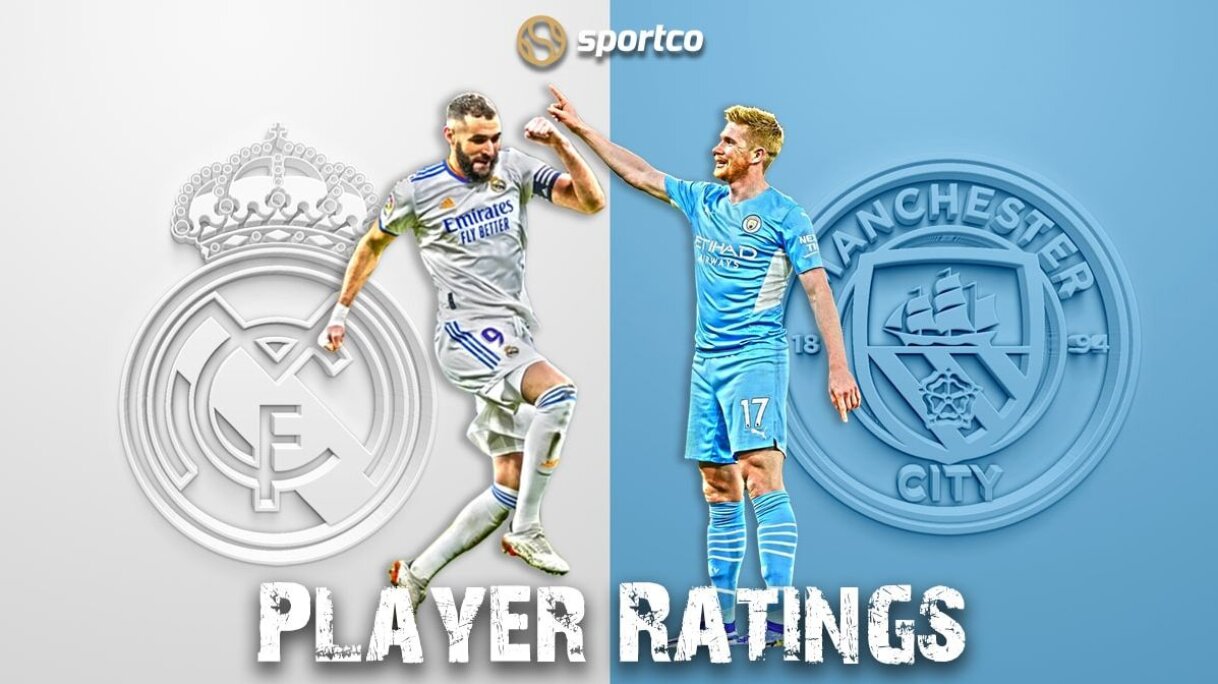 After 120 minutes of nerve-jangling action of football, it was Real Madrid who claim their place in the final of the competition as they got the better of Manchester City by 3-1 on the night and 6-5 on aggregate.

The classic encounter was a stellar showing of why the UEFA Champions League is the best football competition in the world. Here is a look at how the players fared.

The Belgian was rock solid and was hardly to be blamed for the Man City goal as he showcased why he is the best in the business.

Courtois was instrumental on the night as he kept the City attackers silent and made an excellent save in the first half from Bernardo Sliva.

Mendy was at fault for the City goal as he left the backdoors open for Riyad Mahrez to score and finish.

However, the Frenchman made amends by clearing a goal-bound effort towards the dying moments of the game and kept Real in the tie as City led 5-3 on aggregate.

The goal-line clearance for Jack Grealish's effort proved to be a match-winning one in the end.

The Spaniard was one of the best players for the Los Blancos and put in the cross that got Real on level terms in the 91st minute.

Carvajal was superb with his distribution and showed why he is still one of the best right-backs in the game as he ran the channel in City's defense.

Nacho was seen wearing the captain’s armband when Benzema was substituted and he showed why he deserves to wear it.

The Spanish footballer was ruthless throughout the night and put in shifts to stop City from attacking and used his experience when the hosts attended lead in the second half of extra time.

Militao was substituted in the dying moments of the match but was a tricky customer to deal with as he did the no-nonsense job. Solid like a wall, Militao kept Kevin de Bryune silent for the entire game and was instrumental at the back of the Real defense.

The Uruguayan was asked to play the advance role and he did it for the majority of the game. Valverde was a good utility player to have as he covered the field from attacking and defensive mindsets and gave the edge to the hosts.

The German had a tough night to negotiate as he played an important part in helping his side gain position in the midfield. Kroos, though, was unable to win the position and the second ball and was ineffective in the final third and was substituted in the second half.

Like the first leg, Modric looked far from his best but did his job defensively. Employed a No.10, Modric was often seen playing the defensive game more and didn’t have too many chances to influence the game and was eventually called off.

Part of the midfield diamond, Casemiro stopped the passage of play against City but could have done better in restricting Riyad Mahrez. The 30-year-old was technically strong while he won the ball and was an important player who kept Kevin de Bryune and Bernardo Silva silent.

Man of the moment for all Real Madrid fans around the world, Rodrygo was crucial in the comeback win as scored two goals on the cusp of the 90th-minute.

The Brazilian has been in superb nick of form recently and could have ended up scoring a hat-trick had Ederson not denied him in stoppage time.

Vinicius Jr was dazzling to watch as he played on the counterattacks and played on the left-hand side with Modric playing in his usual position. Vinicius scored in the first leg and did what was needed for the team apart from scoring as the City defense managed to keep him shut.

Benzema was far from his usual standards but did pop up with the winning penalty and was quickly substituted, having pulled up a muscle. Going into the final Benzema will have the opportunity to serve his team yet another title as he will try to continue his superb form.

Camavinga was a deadline day transfer for Real in the summer; however, he played like he was there for ages. Camavinga’s play changed the course of the game and turned the game on its head.

The French international was everyone to be seen before he made the daunting runs and won the ball back to see the 13-time champions produce an extraordinary comeback.

The City goalkeeper wasn’t called into action for much of the match, but when he was, it looked shaky for him. Two late goals followed by a penalty looks like a hard account sheet to balance for a goalkeeper, but the Brazilian needed to be alert to the danger.

Cancelo returned from a suspension and was used as a utility player both on the left and right hand of the channel. Although he did his job defensively giving no width, the Portuguese full-back could have added offensive play to his game and put some crosses.

Like Cancelo, Walker also returned to the team on the night but was outrun by Vinicius and looked to have lost bearings at the crucial time. Walker was one of the weakest links in the City team which allowed the passage of attacks from his side.

The City captain played out his final European game for City on Wednesday and was called to shut down the doors for a Real comeback. But it was the other Brazilian, Rodrygo, who made a name for himself as Fernandinho looked like a weak link to attack.

The 25-year-old came late on and was tasked to keep the hosts in the bay, but his lack of experience coupled with Real’s class was too much for Zinchenko to handle. In the end, the Ukrainian faltered like his other teammates and handed the tie to Real.

Not to concede for 90 minutes was a good return for Laporte as he returned to his native Spain, but against Real, you have to be alert, which he wasn’t. Laporte in the early parts of the game was also at fault as he allowed Benzema free, but wasn’t punished.

The city stand-in skipper gave the penalty away that won the tie for Real Madrid, but he was excellent for the entire night. Benzema was hardly given any width by the Portugal defender, but one bad mistake and the game was changed in the extra time.

One of the best City players on the day, Bernardo Silva pulled up strings and dictated the play for City while Kevin de Bruyne was not influential. Silva forced Courtois to make a lovely save in the first half and gave his heart out for the team.

Rodri was great for 90 minutes, but not for 90 plus as he lost his bearings that allowed Camavinga to gain possession. The former Atletico Madrid star almost haunted Real, but clearly class played its part and Rodri could not dictate the play after Real scored.

Kevin de Bryune’s only vital contribution in the tie came in the first two minutes of the first leg where he scored the opening goal. The Belgium star did force the goalkeeper to make saves, but was not at his usual best and lacked match fitness.

The best left-foot in the world of football at the present time, Riyad Mahrez thought he had sealed the deal. But and a big but, his goal with 17 minutes to go, was the beginning of the end for City as Riyad will rue the missed chances from the first leg.

The young Englishman was still a good option to have and did what was needed, both offensively and defensively. Foden was calm and composed and kept possession and had he creped in with a goal, things could have been different.

The Bernabeu pitch witnessed quite a few Brazilians on the pitch on Wednesday and Jesus was one of those. Jesus though didn’t have too many chances as Nacho Fernandez was wall stood strong in front of him and was later asked to be substituted.