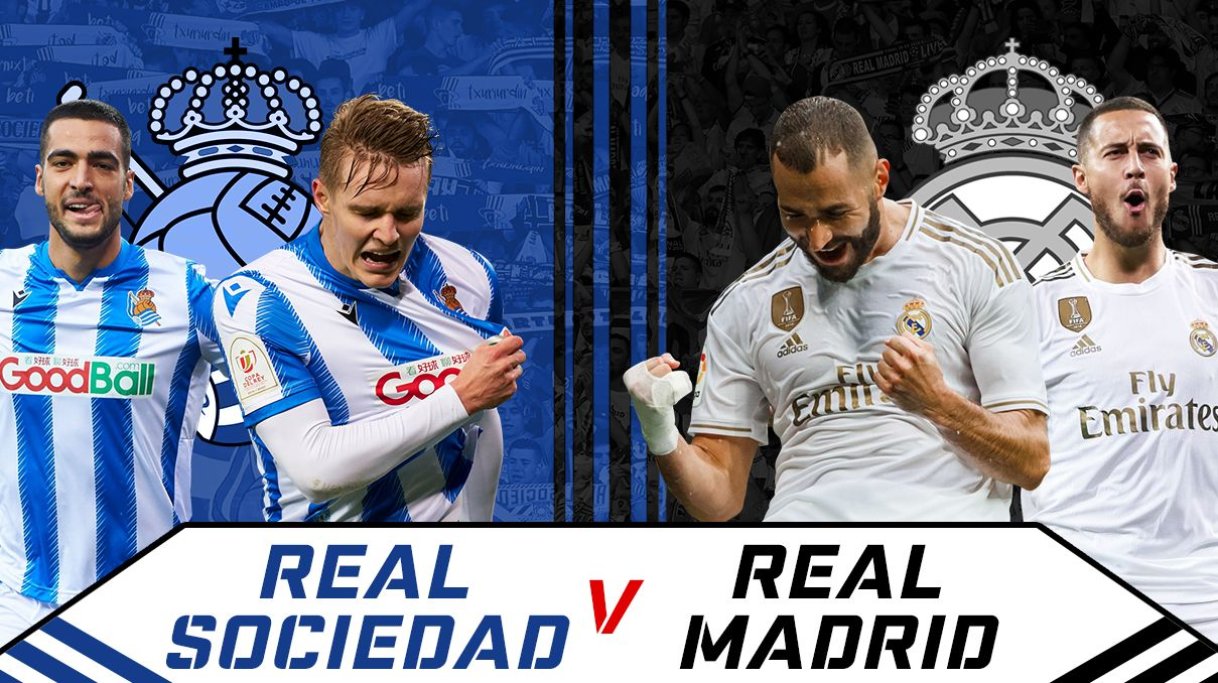 Real Madrid travel to the Basque Country on Sunday night where they face Real Sociedad, who have a chance of making it into the top four for the first time since 2012/13.

Zinedine Zidane’s side won 3-0 in their last game against Valencia despite a poor showing in the first half. The second half was a different story as Los Blancos shifted to top gear.

Marco Asensio scored on his return, just 30 seconds after coming on while Benzema scored an impressive double. However, breaking Sociedad on their home turf will be a challenging task for Zidane’s men but a possibility of leveling on points with the league leaders Barcelona could be a strong motivation.

In head to head battles, Los Blancos are clear winners but Real Sociedad have been impressive too in recent years. The teams faced each other last time in February in a Copa Del Rey clash where Sociedad knocked Madrid out of the competition’s quarter-finals at Santiago Bernabeu.

The game was a complete fixture in all aspects and was filled with beautiful football and drama to spice things up too.

Madrid have won 15 times in the pair's last 20 games. Real Sociedad, surprisingly have won three times out of the last five times the teams have played each other.

Sociedad are yet to win since La Liga resumed, allowing Atletico Madrid to steal an opportunity to march in the race for a Champions League qualification spot. Recent loss and a draw against Alaves and Osasuna respectively have resulted in the hosts dropping out of the top four and thus, this fixture only adds to their troubles.

Real Madrid, on the other hand, have won all their games post resumption, scoring six and conceding only once, even though they are not playing at the Bernabeu. Los Blancos have lost only twice in their last 19 games and are battling to come on level with the Catalans.

Real Sociedad have won two, lost two and drawn a game in their last five games in all competitions while Real Madrid have won thrice and lost twice out of their last five. A 2-0 win against FC Barcelona that is included in it.

The hosts will be without the services Joseba Zaldua, who is suspended, with his place to be taken by Andoni Gorosabel. Martin Odegaard will be a huge loss as he will not be able to feature against his parent club after picking up a knock and could be possibly replaced by David Zurutuza.

Ex-Manchester United star Adnan Januzaj may be benched and both Alexander Isak and Willian Jose are likely to start.

For Real Madrid, Luka Modric may be given more freedom in the middle after Isco was declared unfit due to a hamstring injury. Federico Valverde is expected to start, while Eden Hazard will also be featuring after a more than decent come-back.

Marcelo is expected to take back his spot replacing Ferland Mendy, who was given ample time in the week against Valencia.

He scored a spectacular brace against Valencia, adding to his La Liga goal tally.

The Frenchman has been very active in dropping back and creating chances too, allowing Hazard to break through and operate more freely.

Aritz Elustondo will have a tough time stopping the Frenchman. However, the defender has been sharp with his interceptions and clearances. He is yet to commit an error that has lead to a goal. The Spanish defender has a pass success rate of 81%, making him one of the best distributors in the team.

Whenever Real Sociedad have won, Elustondo has had a big part to play in it defensively and hence all eyes will be on the defender as Txuri-urdinak look for a place in the Champions League.

Going into the game unbeaten in the last five home games, Real Sociedad will be looking to start well and that is the responsibility of Willian Jose, who has scored nine goals and assisted one in 28 games.

However, he will be against the Madrid skipper, who has been solid defensively and can also score when the team needs it the most.

Ramos has managed to score six goals and has been very consistent with his tackles and blocking. The defender has been impressive aerially too and he will be looking to cause all kinds of problems to Willian Jose.

The game will be a strong one, make no mistake.

Real Sociedad will be looking towards this fixture as a huge one as they are unbeaten in their last five home games, including grabbing points against FC Barcelona and Atletico Madrid in that time.

Real Madrid have seemed shaky at moments but have managed to grind out results. However, it will be risky for Madrid as a slow start like the one in their previous game could hurt them in this one.