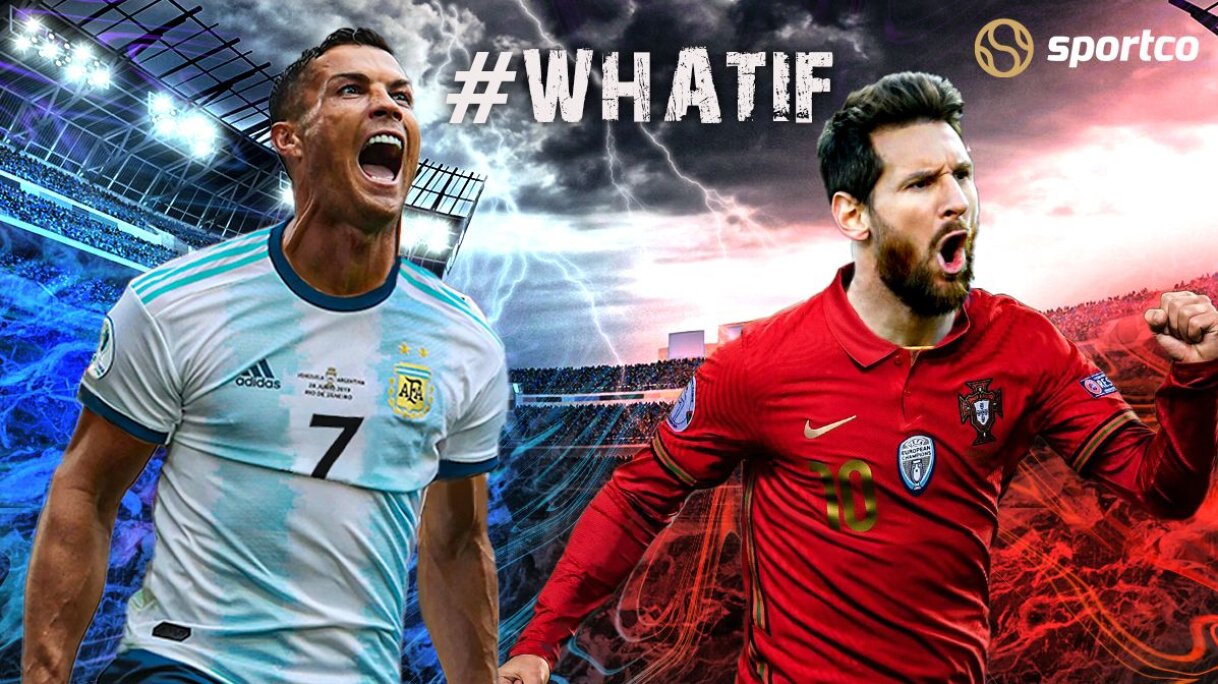 Whatif #1: What if Ronaldo played for Argentina, Messi for Portugal

Amidst the international break, all the players get an opportunity to make the most of their talents to help their homeland achieve glory. Cristiano Ronaldo for Portugal, Harry Kane for England, Zlatan Ibrahimovic for Sweden, and many more players are toiling hard for taking the first step to fulfilling their dreams of lifting the World Cup.

However, be it club football or international, one subject never seems to conclude, Cristiano Ronaldo vs Lionel Messi debate?

Thus, to add more fuel to the fire, Sportco presents a new series of comparisons known as the '#Whatif' series. In this series, we will look at the some of the most unimaginable scenarios such as if these two players were in each other's shoes or a single player played or participated in different environments.

But 'what if' Ronaldo played for Argentina and Lionel Messi played for Portugal?

Would we still blame Ronaldo's Argentine team-mates for their poor performances? Would Messi have more international goals than Ronaldo if he played for Portugal?

Would Ronaldo miss a crucial penalty in the Copa America finals against Chile? Could Messi take Portugal to the Euros 2016 finals without Ronaldo's decisive header against Wales?

Yes, we'll try to cover various propositions like these with more conviction and also see if the arguments we use to prove our respective favorites to be the best would've worked in these situations.

Let's start with 'Whatif' Ronaldo played for Argentina (Note: All the moments and incidents remain the same, only this time we see what difference Ronaldo could've made if he was there)

For that, we will first highlight Messi's journey as an Argentina player. His gigantic presence hasn't been enough to help Argentina lift any major international trophy.

He did win the Under-20 World Cup in 2005, followed by an Olympic Gold at the Beijing Olympics in 2008, he is yet to win a major international title with the senior side.

Messi has appeared for Argentina in eight major competitions, (four World Cups and four Copa Americas) but he hasn't been able to take his team through.

An unrealistic trivia: Lionel Messi went 16 games without scoring for his nation between 2009 and 2011, would that have happened with Ronaldo? Most probably not.

Lionel Messi has been in three Copa America finals ( 2007, 2015, 2016) and also in a World Cup final in 2014. Messi actively played in four but there hasn't been a single goal from his side and the performances were unsatisfactory too.

The 2015 Copa final was a stalemate, eventually leading to a penalty shootout. Gonzalo Higuain and Ever Banega missed from the spot, while Messi scored.

Could Ronaldo have managed a bigger impact on the game with these players besides him in a Copa America final? Looking at Ronaldo's performances in the big games over the years, a 0-0 was never on the cards.

But media reports were all circulating around as to how Lionel Messi's teammates were solely responsible for the loss.

Coming to the 2016 Copa America final, the stage was set yet again and people expected Messi to take charge that year and not allow Argentina to repeat the same mistake.

But the story remained the same. An almost similar squad couldn't find the net yet again after 120 mins and the game went to penalties. This time it was Messi who let his side down, failing to keep his spot-kick on target, with Argentina losing 4-2 on penalties eventually.

What if Ronaldo played this final? 0-0 could've been a fair result with a robust Chile side who had experienced how to play a final in 2015, but looking at his penalty record and the situations in which he has taken the spot-kicks, Argentina could've had two Copa Americas in a row, if not three. Tough pill for the fans who called Ronaldo 'Penaldo'.

Lionel Messi managed to win the Player of the Tournament award in the 2014 edition of the World Cup but it was controversial considering Thomas Muller's performance for the eventual World champions Germany. However, Lionel Messi did score some crucial goals for his side that time. Could Ronaldo have done the same?

Let's focus on how Messi could've impacted Portugal with his presence. Ronaldo made his World Cup debut in 2006, at the age of 21, after he impressed the world with his style of play at Manchester United.

Ronaldo fired in their second game of group-stage, a penalty against Iran. After a game's rest, Ronaldo returned for the Round of 16 clash against the Netherlands but returned to the bench after 34 minutes as a result of a gruesome tackle from Khalid Boulahrouz.

Could Messi have avoided that injury? Certainly not. Ronaldo returned for the quarter-finals against England and also scored the match-winning penalty in the penalty shootout. However, it was Zinedine Zidane's France that killed his dreams of a World Cup triumph.

With Lionel Messi in that squad, Portugal could've added a more creative threat but there are doubts if the youngster's presence could've tilted the momentum towards them.

Ronaldo's international career hit a super low point, surprisingly just a year after he became the most expensive player in the world, having signed for Real Madrid. However, his first World Cup as a Portugal skipper, with no Deco, Luis Figo, or Pauleta, Ronaldo seemed to have lost his way.

Portugal succumbed to the eventual champions Spain in the Round of 16, with Ronaldo scoring just one goal throughout the tournament. Ronaldo did not have a star-studded squad but the fact that they scored seven past North Korea, Lionel Messi could've possibly made more impact against Spain.

In those days, Lionel Messi playing as a false nine was a nightmare for any team and against Spain, he could've surely made a difference in contrast to Ronaldo's usual position as a left-winger. But could Messi pull-off that disallowed goal ruined by Nani like Ronaldo? Well, that may just be another topic of discussion.

Ronaldo was back in form to lead his side in the 2014 World Cup in Brazil after firing multiple goals in the qualifying stages, not to forget he also managed to help his side qualify by scoring four goals against Sweden.

Portugal were out of the World Cup just after three games, with the opener being against the eventual champions Germany. Things could've gone well, but a Pepe red card spoiled Portugal's chances and neither Ronaldo nor Messi could've survived with 10 men against Joachim Low's 2014 Germany side.

The Selecao weren't convincing against the USA and Ghana too, but with Messi things could've gone their way, considering his performances before the knockout stages were outstanding.

Ronaldo also became the first Portuguese player to score in three World Cups, something that Messi is yet to do.

Ronaldo's performances after turning 30 became more clutch and the Portuguese became more clinical. If Messi played the opponents Ronaldo did, crossing 100 goals in international football would still look impossible for the Barcelona man as he barely looked to decide games single-handedly.

CR7 did win the bragging rights on this debate as he managed to secure his only international triumph. Euro 2016 was secured with Ronaldo being in prime form.

Portugal were comparatively far weaker than Argentina, at least until the 2018 World Cup, meaning Messi at Portugal too, would've made headlines about how his team-mates aren't doing enough.

On the contrary, Ronaldo's performance throughout Portugal's Euro-winning campaign was exceptional, and despite not playing a vital role in the finals against France, Ronaldo was involved in each of Portugal's decisive moments, a quality Messi hasn't shown in a long time.

In international games, it is highly doubtful that Messi would've done much even if he played for Portugal, but we did have more than a couple of occasions where Ronaldo's quality of being clinical could've changed Argentina's fate.

Don't worry Messi fans, in the version where the two legends switch clubs, there is a big chance that Lionel Messi could turn out to be the difference-maker, a quality he has not shown with his national side.