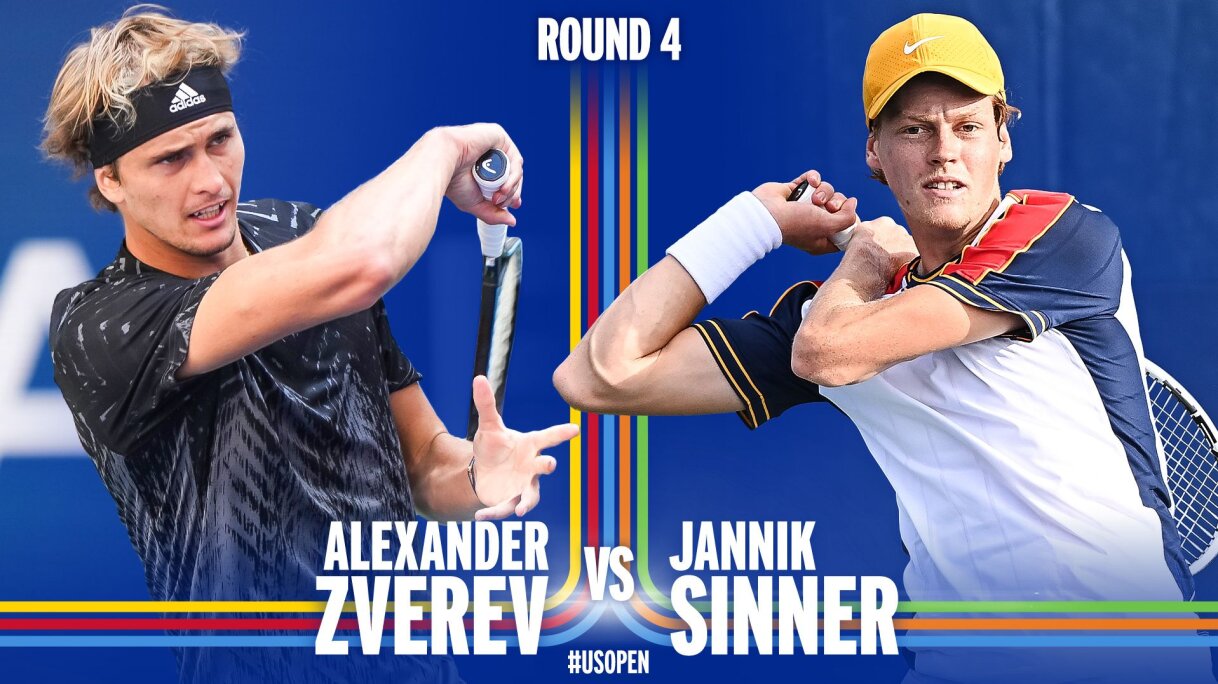 Temperatures are set to soar in New York City. The 4th seed Alexander Zverev goes H2H with the 13th seeded Jannik Sinner in the fourth round of the US Open.

Youngsters attract a lot of eyeballs and Zverev (24) and Sinner (20) will display their aggressive shotmaking amidst roars from the passionate crowd at the US Open 2021.

Zverev defeated an injured Jack Sock in 4 sets in the US Open 2021 third round after 1 hours and 58 minutes. The German fired 16 aces and claimed 80% of his first-serve points.

Sinner survived a jaw-dropping 5-setter against Gael Monfils in 3 hours and 42 minutes in the round of 32. The Italian hit an equal number of aces and double faults (5 each) and fired 36 winners.

Sportco brings back 2 juicy H2H matches of Alexander Zverev and Jannik Sinner that happened in October 2020.

On the other hand,  Zverev had exhausted himself with a 3-set victory against Dennis Novak, a 5-set thriller against Pierre-Hugues Herbert, and another straight-set win against Marco Cecchinato.

Sinner took a big lead by taking the first and second sets with an identical scoreline of 6-3 each. The Italian kept surprising Alexander with drop shots in the opening set. Zverev did not convert 5 breakpoints and hit only 3 winners

The next set witnessed a similar pattern. Jannik Sinner clinched 82% of his second-serve points when compared to Zverev’s 33%. Sascha ran out of gas. 3 winners and 12 unforced errors came off his racquet.

Trust the German to make a comeback after losing the first 2 sets in a grand slam. The 6th seed got back his mojo with a 6-4 win in the third set. Interestingly, the win% on the second serve of both the youngsters was 40% respectively. The Italian’s unforced error count shot up to 22.

However, Zverev could not take the match to the fifth set. The red dirt proved to be Sinner’s perfect ally. The Italian teen played fearlessly as his second serve ticked the right boxes.

Sascha hit another ball long and Jannik Sinner’s 181-minute battle came to fruition. Overall, the 19-year-old made 56 unforced errors but took crucial points with 39 winners when compared to Alexander’s 20.

Aftermath: Sinner and Zverev take a swipe at each other

“I am completely sick after the match with Cecchinato in the night, I can't really breathe, as you can hear by my voice, I had a fever, you know, as well, yeah, in the best physical state, to be honest, I warmed up today, I shouldn’t have played, but I was hoping maybe for a three-set win or something like that,” said Zverev after his defeat to Sinner.

“I respect him (Zverev) a lot because he has won more than me, he has got more experience on the circuit, and he is a great player, however, I do not respect his statements after his defeat to me at Roland Garros, he contradicted himself a lot, he said he had a fever, but in the third and fourth sets, he ran more than me, it seems to me that he was looking for an excuse after his defeat, Federer or Nadal, for example, would never have said such things,” reflected Sinner criticizing Zverev’s bizarre justification.

A change in location and surface favored Zverev. Playing in the Bett1 Hulks Championships, the top seed scripted a big turnaround.

The fast indoor hardcourt conditions perfectly aided Alexander’s explosive serve. In a tense first-set that went to a tiebreaker, Sascha stepped up by winning it 7-6(3).

Sinner hit several returns to the net as Alexander Zverev troubled him with his accuracy. With the home advantage, the German was fully fit and played with an attacking mindset. Overall, he fired 7 aces and took 77% of his first-serve points.

So, tennis connoisseurs, who do you think will take the lead in the H2H record, Zverev or Sinner? Do publish your comments below.