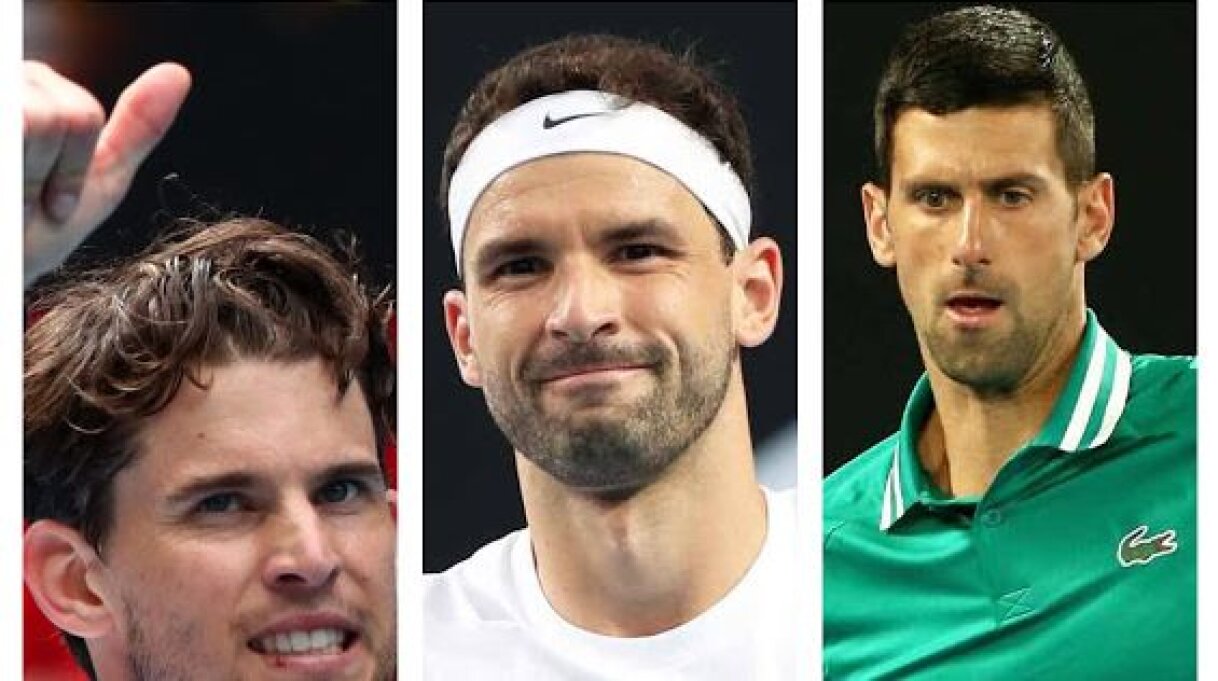 The Australian Open continues to throw up star-studded clashes as Dominic Thiem squares off against Grigor Dimitrov while defending champion, Novak Djokovic locks horns against Milos Raonic in the fourth round at Melbourne Park

Due to a 5-day complete lockdown imposed by the Victorian Government in Melbourne due to increasing cases of coronavirus cases formed in clusters, no fans will be allowed inside the stadium.

Dominic Thiem was staring at a defeat as he was down by two sets against a mercurial Nick Kyrgios was firing on all cylinders. But, the Austrian made a strong comeback to take sets 3 and 4 with a scoreline of 6-3 6-4 as Kyrgios's level started to dip a bit.

In the deciding 5th set, he got a crucial break of serve and capitalized on it to clinch the match. It was the fourth time in his career that he had won a match after turning a two-set deficit.

He remained composed and executed his game plan to perfection despite a majority of the crowd on the John Cain Arena firmly backing Kyrgios.

The 3rd seed smashed 14 aces, hit 57 winners, and clinched 78% of his first-serve points. His cross-court forehand pass and down the line backhand was on fire throughout the match.

“There are easier things than playing Nick at his home tournament on his favorite court, I stood further behind the baseline to return his serves in order to read his serve better and I got more looks to break him, I always prefer playing in front of a crowd, even if they are for their local hero, but I accepted it,  tonight was epic and it was a great match," said Thiem quite pleased with his impressive performance.

On the other hand, Dimitrov was cruising at 6-0 1-0 against Pablo Carreno Busta when the Spaniard retired hurt just 38 minutes into the match after taking a medical timeout. The Bulgarian has been in fantastic form so far and is yet to drop a set.

Dimitrov leads the head to head record 3-2 against Thiem. This is their first meeting in a grand slam.

Statistical comparison of Thiem and Dimitrov in this year's tournament

Thiem was thoroughly tested against Kyrgios and played his best tennis to triumph. Dimitrov's quick-strike tennis has benefited him immensely on the fast courts in Melbourne. Thiem's spectacular shotmaking will have a stiff challenge in Dimitrov's powerful groundstrokes.  The Bulgarian would be fresher for this match than Thiem.

Djokovic was cruising to a comfortable win against Taylor Fritz in the third round having taken a two-set lead, But, an abdominal injury hampered his game as he lost the next two sets. However, the World number 1 lifted the level of his game in the decider winning it 6-2 to emerge victorious.

Djokovic hit 15 aces and claimed 75% of his first-serve points. It is the 14th time that the Serb has entered the fourth round in the tournament. His win-loss record in Melbourne Park improved to 78-8.

“In the beginning of the third set, I made this quick move on the return going to the forehand, rotating there, and I just felt a tear, I felt something happen, I went out for a medical timeout where I was tested and evaluated, I have huge pain, I took the highest dose of anti-inflammatories possible," said Djokovic explaining the details of his mid-match injury. With just a 1-day break, the Serbian revealed that he will not train on Saturday ahead of the match on Sunday.

“The reasons for my success in Melbourne are the conditions here, especially when it is warmer, the balls are a bit more lively and quicker through the courts. I think, for me, a big part of it is also the timing when this tournament falls beginning of the year," said Raonic analyzing the factors behind his successful run in the Australian Open so far.

Djokovic has a perfect 11-0 head to head record against Raonic. They have played twice in the quarterfinals of the Australian Open in 2015 and 2020 with Djokovic winning both the matches in straight sets against Raonic.

The Serb's forehand was off-color in the third and fourth sets against Fritz as Djokovic managed to get some points with his first serve. He will be waging a war against time as he looks to minimize the impact of his injury.

Raonic has relied on his big serve and sharp forehand to get a majority of the points. He will depend on these weapons to come out firing against Djokovic's impenetrable defense.