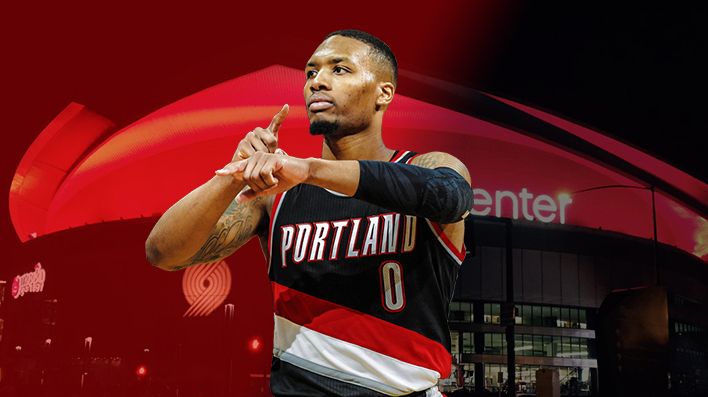 Clutch. That all important word in the world of competitive sports. The baptism by fire of the best of the best. If you can come up big in clutch situations, you belong to the pantheon of greats. If you cannot, then you wait in the purgatory of “good, but not good enough”.

Last night, Damian Lillard added to his “clutch” resume with an incredible-game winner against the Oklahoma City Thunder. Lillard dropped a long-range bomb on Paul George in the final seconds to send the Portland Trail Blazers through to the Western Conference semi-finals.

The stats also back Lillard’s perception of being a clutch performer. In what the NBA calls, game-on-the-line-time (final minute, where a team is behind by three or fewer points, or tied), Lillard has been deadly. He has made 44 of 114 shots in above mentioned situations in his NBA career. That is an astonishing clip of 38.6 percent, considering the situation and the fact that many players averaged the same clip as their overall shooting percentage in the 2018-19 NBA season.

This, however, is not the first time that Lillard sent in a last-second dagger. In fact, the Weber State standout has shown his killer instinct from the early part of his career.

Considering all the hype around Dame’s last-second winner, here’s a look at three of his best clutch plays (in the author’s opinion, of course).

Dame bagged home the NBA Rookie of the Year award in 2012-13, and this is one of the reasons why.

With five seconds remaining, Lillard produced what would go on to become a trademark last-second game-winning three. The point-guard got a handoff from Luke Babbitt, who then created space for him via a solid screen. Dame, sensing the opportunity, launched a three despite Hornets’ Ryan Anderson getting a hand up. The ball swished inside the basket as the clock expired and the Trail Blazers defended home court.

The game-winning three was Lillard’s fourth trey in the game, off 10 tries. It’s safe to say, rook Lillard had arrived on to the NBA scene.

In terms of pure ridiculousness, nothing comes close to this. In terms of being a pressure situation, this loses out to another but I’ll explain it later.

With Rip City leading the first round series, 3-1, it all fell down to Damian Lillard in the last 10 seconds of the game.

What made it special was the manner in which he did it. Waved away calls for a screen. Measured his man, who happened to be Paul George, one of the foremost defensive players in the NBA.

How does Dame end it? He takes a shot, roughly two steps ahead of the center logo, and drains it to send the Thunder packing, and bring up a half-century of points in the game.

You cannot write scripts like that. This was Damian Lillard at his instinctive best, giving what could, arguably, be the most-watched play of the 2019 NBA Playoffs.

His comments after the match, particularly considering his beef with Russell Westbrook, said it all.

“There’s been a lot a talk, a lot of back-and-forth, and that was the last word.”

It indeed was the last word. ‘Dame over’ for OKC’s aspirations in the 2019 Playoffs.

There are some moments, set in stone in the echelons of time, that signify the birth, consolidation or end of a legend. Alexander the Great’s victory at Issus began his incomparable legend and the killing blow at Gaugamela consolidated his status as the Ancient World’s greatest conqueror.

Lillard’s game-winner against the Rockets served a dual purpose. For the avid NBA viewer, Dame was already a clutch shooter and this game showed he could do it in the most crushing situations. For the average viewer, and the sports world, in general, this was the birth of ‘Dame Time’.

What makes it bigger (marginally) than the winner against OKC is the series score. Out here, the Trail Blazers were leading the series 3-2, but if not for Lillard’s exploits, they would’ve been heading for a Game 7.

Destiny, however, had more dramatic things in store.

With 0.9 seconds left on the clock, the Blazers were down 96-98. Lillard rushed to the left wing to receive an inbound pass from Nicolas Batum. Dame turned and released a three over Chandler Parsons. The ball swished perfectly inside the net.

‘Dame’, set and match to the Portland Trail Blazers.

Lillard’s game-winner handed Portland their first Playoffs series win in 16 years (at the time) as they advanced to the second round.

This was the moment that made Damian Lillard a star in the eyes of sports fans all across the world.

Funnily enough, Parsons had something to say after Lillard’s game-winner against the Thunder, two days ago.

Damian Lillard: a cold-blooded killer on the court. No other words can describe him.

In case you wanted to see all of his clutch plays, you can find them here.