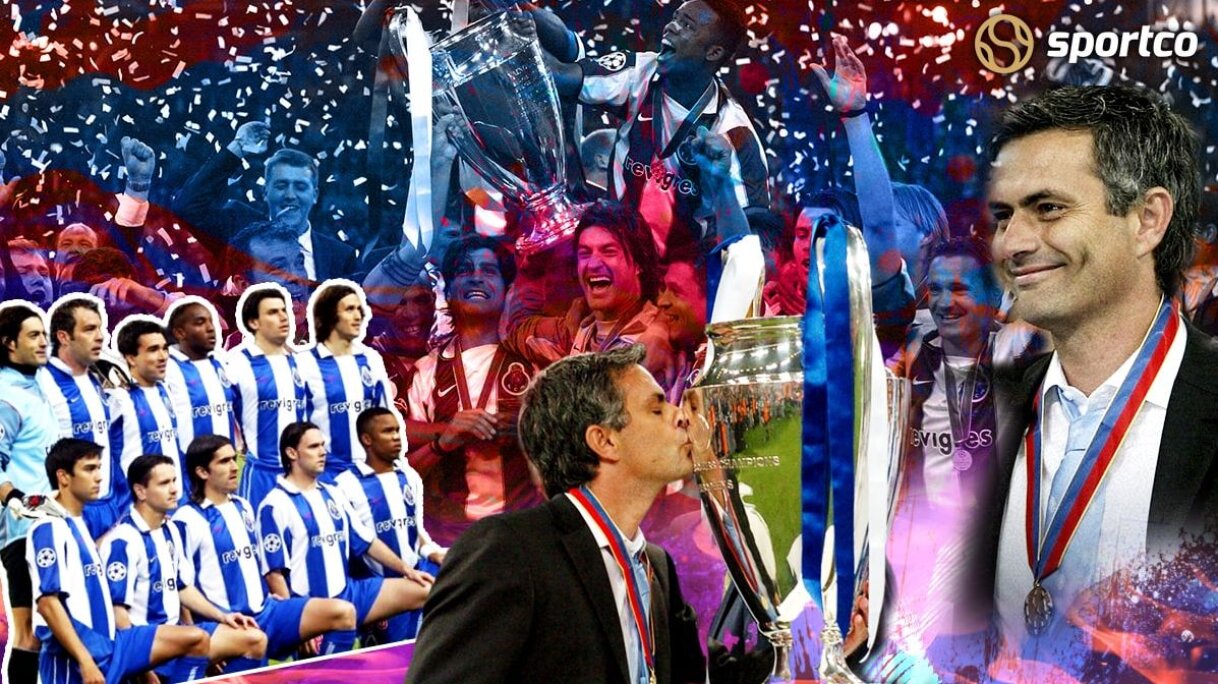 This article will take you through down the memory lane as Sportco relives the historic Champions League success that FC Porto enjoyed in the 2003-04 season under the managerial leadership of  Jose Mourinho.

We have seen many exquisite events in football but an underdog winning Champions League led by one of the top-class managers in Europe we have never seen.

We recall memories of the 2003-04 season when Jose Mourinho guided the Portuguese side, Porto, to the Champions League trophy.

Under his tutelage, the Portuguese side proved too much for financial power teams such as Real Madrid and Man United and went on to win the trophy of their dream.

In the last 16, they met one of England’s powerhouse Manchester United. FC Porto won the first leg 2-1 at their home and drew 1-1 at Old Trafford, one of the famous wins for Jose Mourinho, who sprinted on the pitch after the final whistle as his hand on the sky in a jubilant mood.

Porto were one minute away from elimination before Francisco Costinha netted the equalizer at Old Trafford, which saw his club advanced to the quarter-finals on 3-2 aggregate.

They played French side Lyon next in the quarter-final and easily outclassed them on a 4-2 aggregate. Porto was getting closer to their dream and was one game away from reaching the Champions League final.

In the semi-finals, they came up against Deportivo La Coruna, beating them 1-0 on aggregate and reached the Champions League final.

It was a surreal feeling for all the players and the main man Jose Mourinho who took this Porto side to the final, but they still had to pass the last obstacle to get their hands on the holy grail.

The final stage was set between AS Monaco and FC Porto at Gelsenkirchen, Germany. Porto was one of the dominating sides going into this contest, as they prevailed 3-0 and secured one of the biggest prizes of Europe, the Champions League.

There were jubilant scenes in the stadium as one of the underdogs led by Jose Mourinho won the Champions League, which will be etched in the folklore of football history.

What System did Jose Mourinho imply at Porto?

Jose Mourinho stuck to 4-3-1-2 diamond formation, where he churned out results quickly. His system of play showed flexibility with promising players. Ricardo Carvalho, Costinha, Deco and Derlei were some of the best players in the squad.

In his diamond system of play, the holding and attacking midfielders were supported by two wingers who would close down opponents in the center, leaving space on the flanks for fullbacks to cover. Fullbacks would go high up the pitch providing width while attacking.

Although the diamond style of play had one of the flaws, which was the lack of width that any team could have exploited. So, how did Mourinho counter it and outclass his opponents?

Mourinho deployed Maniche and Mendes on wide areas where they were assigned to mark opposition fullbacks- hence, cutting down on any spaces which could be exploited.

The 2003-04 success of FC Porto in the Champions League marked the beginning of a new era in European Football as this led to the rise of Jose Mourinho, arriving at the big stage in style.....and the rest, as they say, is history!!