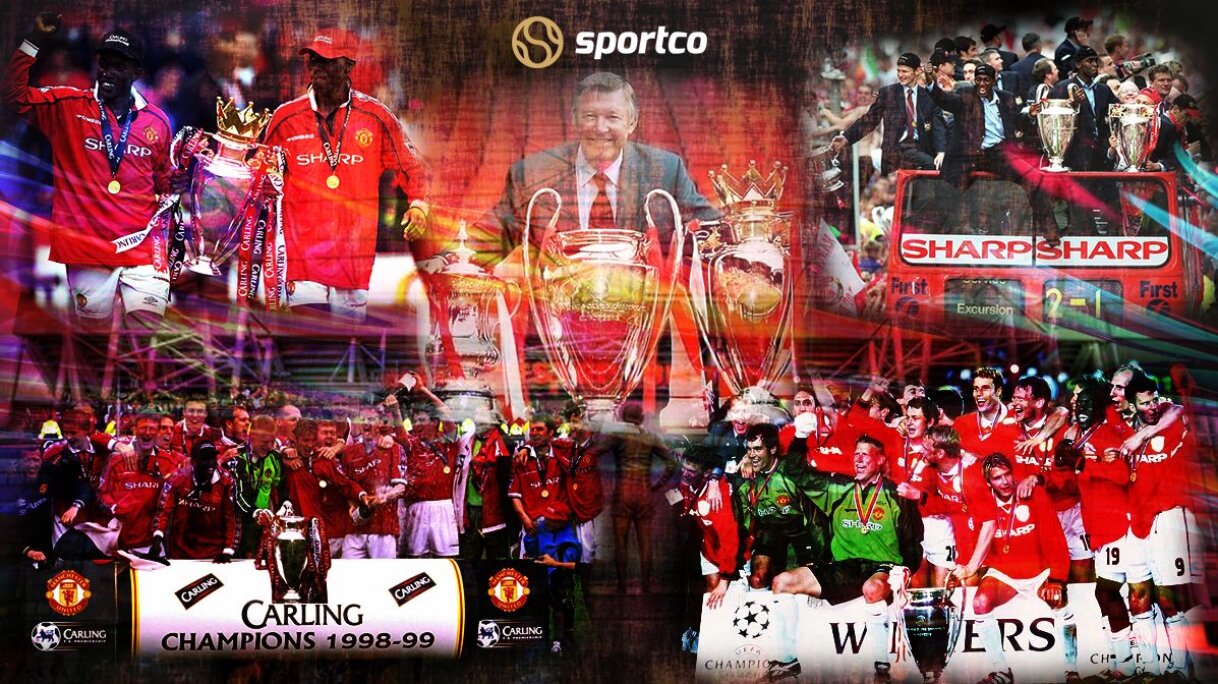 In this article, Sportco will analyse the Man Utd 1988-99 treble-winning squad, their season, tactics, formation and playing XI.

In the 1998-99 season, Manchester United became one of the first-ever English clubs to win a treble and the first to date only side in English football. However, it all started with a series of highs and lows before securing a historic treble.

The Red Devils previous season ended trophyless, which put the club under immense scrutiny, and this meant the club had to win a trophy in the next season by hook or by crook.

The 1998-99 season for the treble-winning squad of Man Utd started with a 1-1 draw against Leicester; their first win came in September, beating newly promoted Charlton Athletic 4–1.

The Red Devils then embarked on a winning streak, triumphing in every match. However, the streak was halted by reigning champions Arsenal in a 3-0 defeat sending Man United in 10th place after five matches.

Arsene’s Wenger extended his winning record against Ferguson, and it was his third straight league win over Ferguson (four in all competitions).

Before the new year, Man United collected only three points in December after three straight draws and a loss, although it was Manchester United last defeat of the season as the squad started to show great rhythm and cohesion between each other after the end of December.

The player started to click with each other which saw them register one of the biggest wins in their history as they defeated Nottingham Forest 8-1. The club continued winning matches after matches and were declared the best team in the league by a country mile.

The league was its culmination round, and Manchester United required four points to get their hands on the title, as Arsenal were handed a defeat that ended Wenger’s chances of retaining the league championship.

The Red Devils ultimately won the title after a draw against Blackburn Rovers and a 2-1 victory over the Spurs.

After the Premier League triumph, the Red Devils produced an excellent comeback against Juventus in the UCL semi-final, from 2-0 down to scoring 3 goals to secure the final berth against Bayern Munich.

Man United had tough draws in the FA Cup. The team dispatched four Premier League teams en route to the final: Middlesbrough, Liverpool, Chelsea, and Arsenal. Man United met Newcastle in the final at Wembley, where they sealed an easy 2-0 win over the Magpies.

The 20-times Premier League winners needed only one trophy to complete the historic treble.

It all went to the final trophy of the season, the Holy Grail. Manchester United conceded an early goal in the final. The contest reached its closing gate, and it looked like the Red Devils would lose 1-0. However, In injury time, the Red Devils turned the table around.

United won a corner and Beckham stepped to curled the inside Bayern’s box although it was partially cleared by the Bayern defence, the ball ended in on Giggs’s foot, who sent a low volley into the path of Sheringham, whose scuffed shot squeezed low inside the post.

In 90+3 stoppage time, Man United won another corner again taken by Beckham. His precise shot landed on Sheringham’s head, who nodded it to Solskjær foot, who blasted the ball into the roof of the net.

The Bayern fans and players look shocked and devastated as the comeback is complete, and the entire stadium is jubilation. Manchester United became the first-ever English side that has won the historic treble.

This formation offered free-flowing, attacking football with an ‘if we score more than you, we win’ mentality. One of the strongest XI and the players were successful in executing the plan in matches.

Under Sir Alex Ferguson, the squad had great fluidity and teamwork. The Scotsman implemented a traditional 4-2-2 formation. The team played with freedom, and players had enough space to showcase their creativity.

During attacks, players developed a high-pressing attitude to win possession. Ferguson employed fast tempo and direct style, where Beckham would bombard forwards with accurate crosses in the opposition box.

The 4-2-2 formation allowed players to pass in the space and wide areas. Midfielders like David Beckham and Paul Scholes often pick players with their long passes; this stretches the opposition’s defence and creates enormous space for United players.

Every player in the squad had a purpose. Beckham was the backbone of midfield who dropped deep to allow full-back (attack), Gary Neville, to overlap. Ryan Giggs and Denis Irwin on opposite flank formed great tandem.

The dynamic duo of Paul Scholes and Roy Keane were deployed in the centre of the pitch, offering defence and support to the attack when required. Up-front, Dwight Yorke and Andy Cole were telepathic, and their movements were immaculate on and off the balls, their high-pressing helped the team defensively.

Alex Ferguson formation outclassed many teams he came across. His higher tempo football offered players a great understanding of the game.

Their press, man-marking and digging holes to capitalise on the weakness of opponents. With strict man-marking, the Red Devils dominated the possession.

Hope you (Man Utd fans especially) enjoyed this article on the historic treble-winning squad of Man Utd of the 1998-99 season?