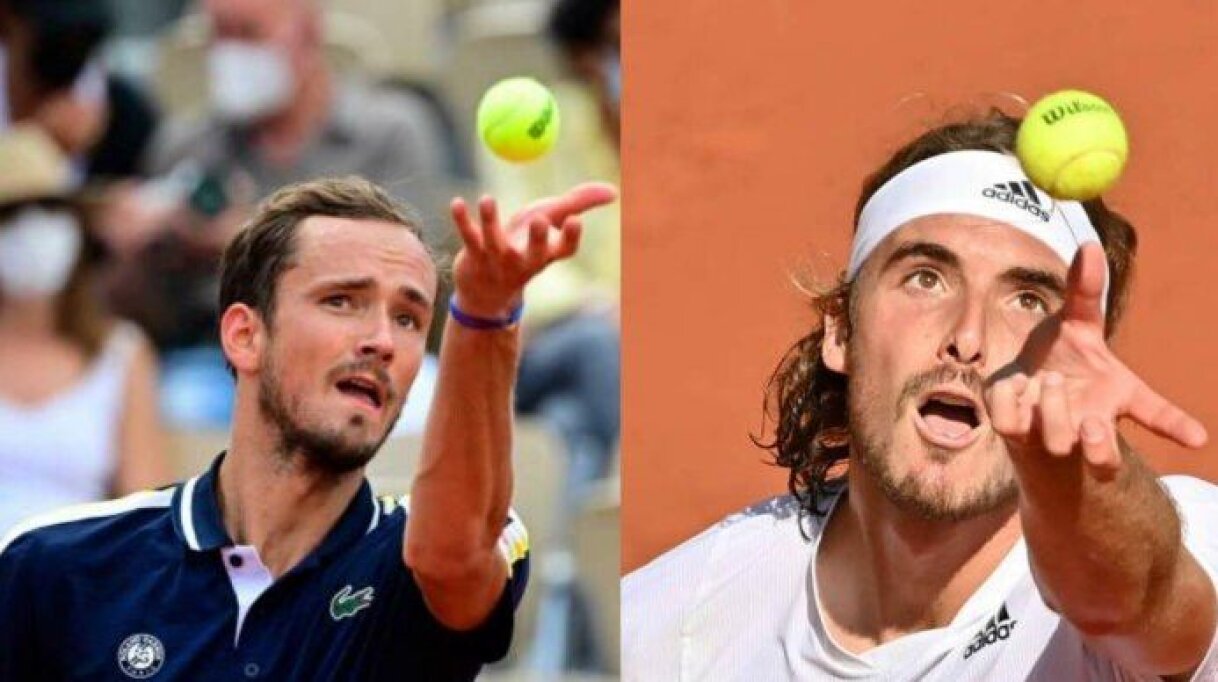 French Open 2021 Quarters: Medvedev vs Tsitsipas: Will the Russian reign or Will the Greek grab it?

It is an exciting Next-Gen clash as the 2nd seed Daniil Medvedev takes on the 5th seed Stefanos Tsitsipas in the quarterfinals of the French Open 2021.

The Russian beat the Greek in their only clash on clay (Pre-Quarters of the Monte Carlo Open, 2019 in 3 sets).

What happened in the last 5 head to head matches between Medvedev and Tsitsipas?

Medvedev had a field day with his serve, pounding 17 aces and winning 88% of points on it. Tsitsipas did not have any gas left in his tank after a tough 5-set victory against Rafael Nadal in the quarterfinals. The Greek took a meager 46% of points on his second serve.

The first serve clicked for the Greek as he claimed 89% of points on it. The Next-Gen star did not commit any double faults and hit deep returns forcing the unorthodox Medvedev to play passively.

Daniil’s majority of points came from his superior serving (First Serve - 89% and Second Serve - 70%). Tsitsipas had come into the match after defeating the top seed Novak Djokovic in 3 sets. The Greek’s weak second-serve winning % of 53 proved to be his biggest weakness.

Despite landing only 45% of his first serves in, Medvedev pulled off a 3-set win. The Russian raced ahead with a 6-2 lead.

However, Tsitsipas roared back taking the second set 6-1. A solitary break of serve in the third set helped Medvedev to take it 6-4. Overall, Daniil won 61% of his second-serve points, more than Tsitsipas’s 45%.

It was the first head-to-head meeting between Tsitsipas and Medvedev on indoor hardcourts. The Russian used the fast conditions to his advantage, smashing 6 aces and taking 86% of his first-serve points.

Tsitsipas won more points on his second serve (63%) than Medvedev (61%). But, a poor breakpoint conversion rate of 25% made the difference as he could not pounce upon the crucial opportunities.

“I think I have played some of my best tennis when I do not think much on the court, when everything is done automatically, on autopilot, he (Medvedev) serves extremely well, I have to say, he has improved over the years with his serve, I just have to play my game, let the rest be witnessed,” said Tsitsipas confident of putting up a good show against the 2nd seed Medvedev in the quarterfinals.

6 Stats that Tsitsipas can use to oust Medvedev

3 Stats that give Medvedev a big edge over Tsitsipas

Medvedev is proving his detractors wrong with his exploits on the Parisian clay. Psychologically, the Russian holds the edge against Tsitsipas having just lost 1 match to him out of 7 matches.

This mouthwatering Next-Gen encounter could be decided between Medvedev’s strong first serve and Tsitsipas’s powerful one-handed backhand. The Greek will be extra motivated to clinch his first victory on clay against Medvedev.

Prediction: Stefanos Tsitsipas to win in four sets against Daniil Medvedev and progress to the semi-finals.