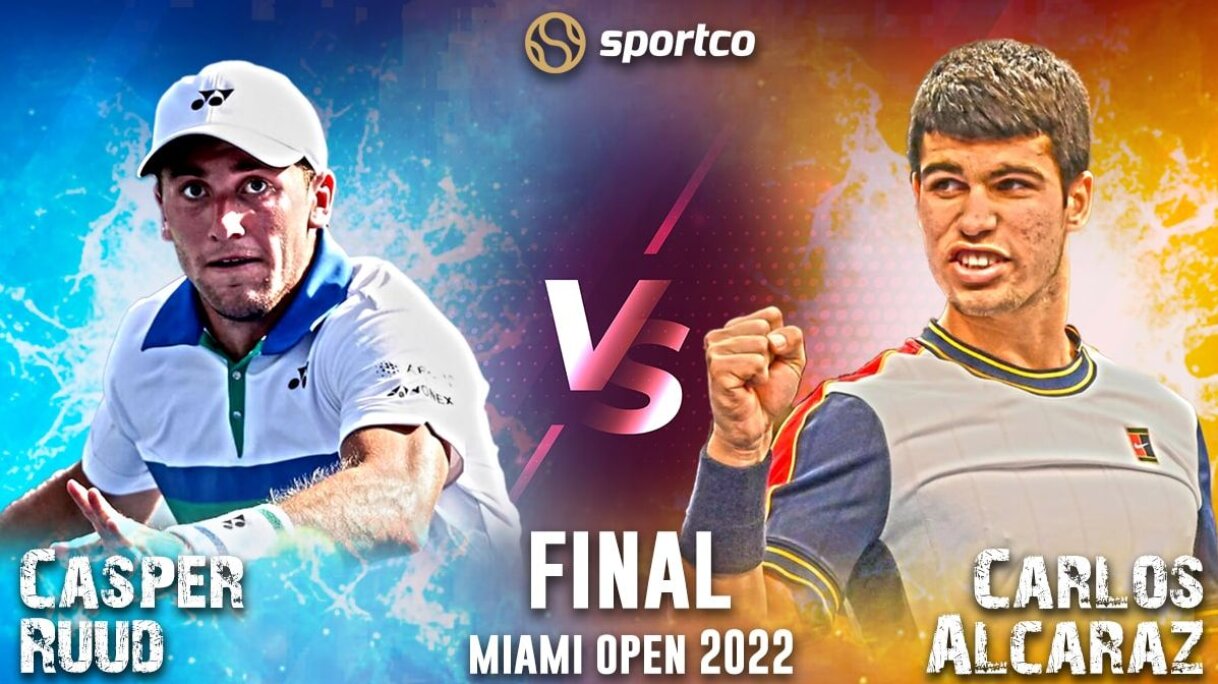 The 2022 Miami Open will have two debutants as Carlos Alcaraz will take on Casper Ruud in the showdown final on Sunday (April 3).

Both Alcaraz and Ruud have never been to an ATP Masters 1000 final and this will be a perfect opportunity for them to showcase why they are the future of men's tennis.

After a breath-taking week and a half, both Alcaraz and Ruud will be determined to get over the line and stamp their authority on the tennis world.

The pair have met only once in the past, which came in 2021 at the Marbella Open where the home favourite Alcaraz sailed through in straight sets, with a 6-2, 6-4 win.

The meeting in the quarter-final remains the solitary outing as Norwegian Ruud could have the perfect opportunity to exact revenge on his opposite number.

While Spaniard, Alcaraz, recently won the Rio Open, he will certainly be at the height of his confidence. While the only meeting was a dominant win for the 18-year-old, the upcoming affair could be even.

Carlos Alcaraz, 18, has lost only two matches in the calendar year as he lost to Rafael Nadal in the semi-final of the Indian Wells and in the Australian Open to Italian Matteo Berrettini in a five-set thriller.

Alcaraz's overall play has been superb as the Spaniard banks on his first serve to play a huge role in the final.

Alcaraz beat the likes of Stefanos Tsistipas, and Marin Cilic in straight sets while he struggled in the quarter-final against Kecmanovic, but eventually got the job done as he triumphed 6-7, 6-3, 7-6 to make the semis.

Casper Ruud has so far impressed in the tournament and it is his first serve that has seen him improve his performance considerably and maintain consistency.

Apart from the second set against Alexander Zverev in the quarter-final he hardly has looked in trouble, distributing any no breakpoints.

Plus the added incentive of having a good forehand has helped him in the long run during the course of the tournament.

Alcaraz was given a tough day at the office when he faced Miomir Kecmanovic in the quarter-final as he prevailed in a third-set tiebreaker that could have swung in either direction.

Matter of fact the semi-final win against Hubert Hurkacz wasn't a straightforward one as he won both the sets on a tiebreaker.

Interestingly only one of his last six sets in all matches has been decided without a tie break. Alcaraz beat the likes of Stefanos Tsistipas and Marin Cilic on his way to the final, importantly beating them in straight sets.

Casper Ruud has had a very straightforward journey but faced the likes of Zverev, and Cameron Norrie on his way to the first ATP 1000 Masters final. He beat Alexander Bublik 6-3, 6-2 to advance, while Henrik Laaksonen was his first victim at the start of the tournament.

Prediction: Carlos Alcaraz to win the final in straight sets (7-5, 6-2) against Casper Ruud.