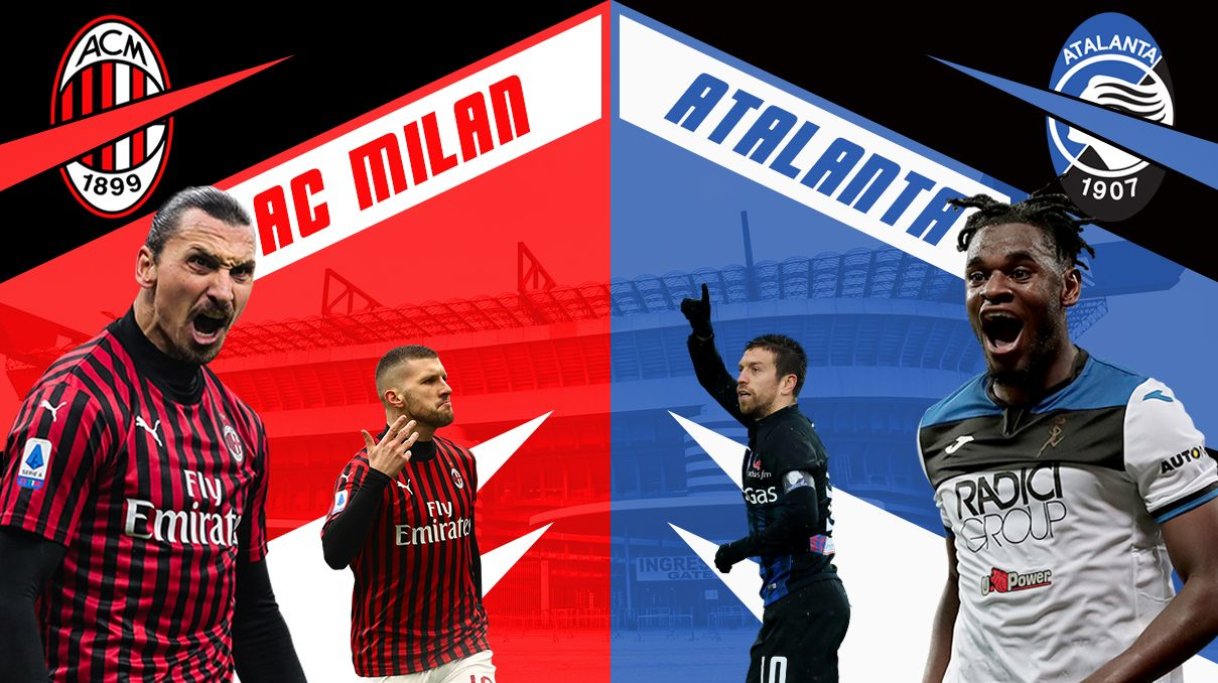 AC Milan vs Atalanta: Serie A Preview and Prediction

The two most in-form Serie A sides clash heads tonight at the San Siro as sixth-placed AC Milan host Atalanta.

Both clubs have taken the Serie A by storm since the league resumed and are yet to face defeat since the restart.

After having a poor pre-restart season, AC Milan have improved by leaps and bounds. Stefano Pioli’s men have finally started functioning as a team and the results can be seen.

Gian Piero Gasperini’s Atalanta have taken everyone by surprise as they are giving a solid challenge to Juventus up top. The bianconeri lost last night to Udinese and this game could prove to be a great chance for Atalanta to close the gap to three points between them and Juventus.

Atalanta has also broken the Serie A record for most goals scored by a team, with 95 goals scored. They are on course to score a century of goals in the Italian top flight.

The rossoneri are unbeaten in their last nine Serie A games. They have posted six wins and three draws in this duration.

Notable wins include a 3-0 hammering of Lazio and a memorable 4-2 win over arch-rivals Juventus.

In their last outing, Pioli’s side overcame a 10-man Sassuolo at the Mapei Stadium thanks to a brace from Zlatan Ibrahimovic.

Atalanta have not faced defeat in their last 15 Serie A games. This incredible run has seen them win nine games on the trot from February 8 to July 8. La Dea were able to get positive results against Italian heavyweights Lazio, AS Roma and Napoli.

Gasperini’s men ground out a 1-0 win over Bologna in Bergamo in their last Serie A a game.

Super-sub Luis Muriel scored his 18th goal of the season (and Atalanta’s 95th Serie A goal) to get the three points at the Atleti Azzurri d’Italia.

The last six meetings between these sides have resulted in three draws, two wins for Atalanta and one win for Milan.

Josip Ilicic led the way with a double along with Papu Gomez who scored one and assisted one. Mario Pasalic and Muriel were the other names on the scoresheet.

Milan, unfortunately, are dealing with a massive injury crisis.

Defensive mainstays Alessio Romagnoli, Theo Hernandez and Andrea Conti are sidelined for this game. Pioli will have to rotate his defense and bring in the likes of Davide Calabria, Matteo Gabia and Diego Laxalt.

Breakout Milan star Ismael Bennacer is suspended for this game which should see the experienced Lucas Biglia come in for him in the XI.

Atalanta have no injuries to worry about but Timothy Castagne is suspended for this match.

The old warhorse is still going strong, as evidenced by his goal return. Ibrahimovic was also the hero for the rossoneri in their last win over Sassuolo as he scored a brace.

The legendary Swede has scored two and assisted one in Milan’s last two Serie A outings. Since the restart, he has found the net four times and provided three assists.

Mattia Caldara will not have issues with Ibrahimovic’s speed but the latter’s offensive awareness and physicality will be hard attributes to nullify.

Caldara has slotted in well in Atalanta’s defense and it will be fascinating to see how Gasperini utilizes him to contain the Swede.

As Milan head into this game with an injury-ravaged backline, the onus will be on experienced Simon Kjaer to provide some stability.

The Dane actually started this Serie A season in the black-and-blue of Atalanta but La Dea cancelled his loan spell. Sevilla then loaned him to Milan where he has become a starter since then.

The biggest threat to Kjaer and Milan’s defense, however, will not be one of Atalanta’s starters.

Muriel has scored 18 goals this season in 31 games but he has only started only 10 times.

The Colombian forward is adept at tormenting goalkeepers from range so Kjaer will have to make sure that Milan’s defense is ready to close in on Muriel when he is in range.

Had Milan been fielding a fully fit side, this game would have been harder to call. With three of four main defenders out for Milan, the edge goes to free-scoring Atalanta.

Bennacer’s absence is also going to hurt Milan’s chances. The Algerian’s combativeness and effort in midfield would have been key in dealing with Gomez.

I can see Milan put one past the net thanks to the incredible talents of Ibrahimovic and Ante Rebic. The game, however, will go to Atalanta as their sensational attacking unit will feast on a makeshift Milan defense.