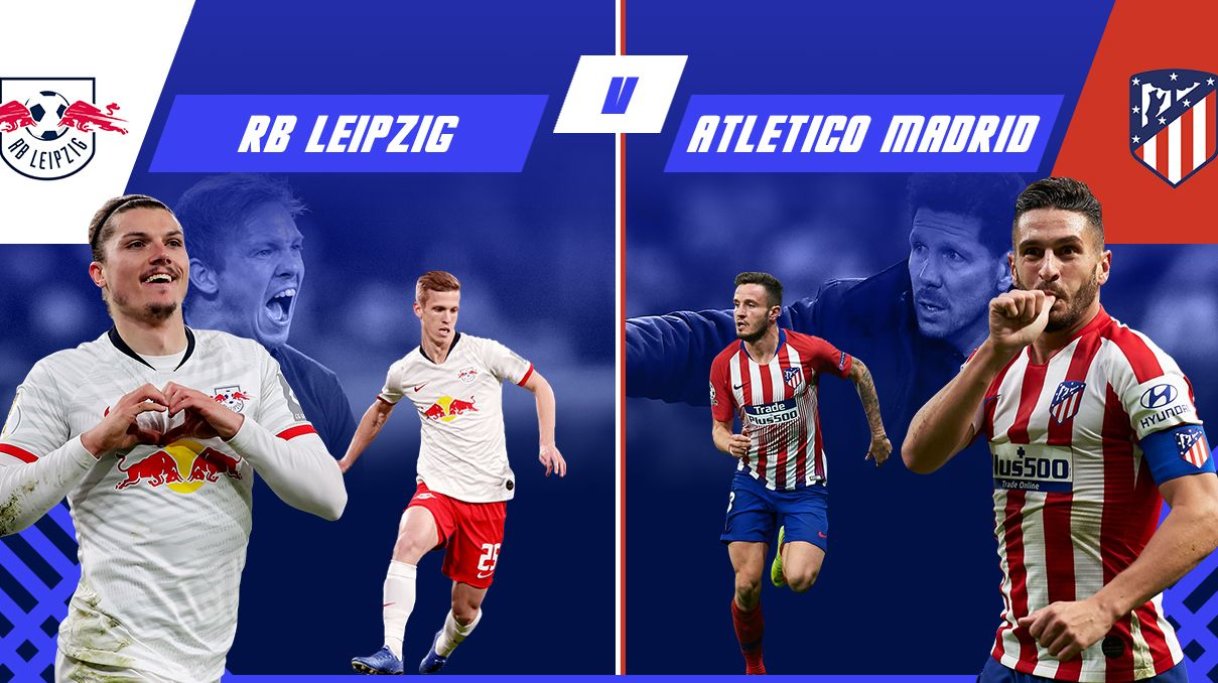 The Estadio Jose Alvalade in Lisbon is host to the green and white of Sporting Club de Portugal but tonight the famous venue will be smothered in shades of crimson as RB Leipzig take on Atletico Madrid in the Champions League quarterfinal.

Julian Nagelsmann’s men enjoyed a solid but unspectacular run once football resumed in Germany in May.

Die Roten Bullen stacked up four wins, three draws and a loss in eight games in the Bundesliga. The failure to win more games derailed their title charge, ultimately finishing third in the league, behind Borussia Dortmund and champions Bayern Munich.

A big concern for RB Leipzig will be match fitness. Their last competitive fixture was a win over FC Augsburg on 27 June. Since then, they have only taken to the field once, playing a 1-1 draw in a friendly against VfL Wolfsburg on 30 July.

Atletico Madrid were undefeated in their post-lockdown La Liga campaign.

Diego Simeone’s men played 11 games and won eight of them with the remaining three being draws. One of those draws was a 2-2 thriller against FC Barcelona.

Through this run, Los Rojiblancos were able to stave off Sevilla to finish third in the 2019-2020 La Liga. Their defense was its usual self, conceding only six goals in these 11 games.

Match fitness will be a cause for concern for Simeone as well. Atletico’s last competitive outing was a 1-1 draw with Real Sociedad on July 19, the final matchday of La Liga 2019-2020.

This quarterfinal will be the first competitive outing between these sides. Interestingly, Atletico Madrid have faced German opposition thrice in the Champions League knockout stages, progressing on all three occasions.

Both sides also overcame English opposition in the Round of 16 to set up a quarterfinal meeting.

Nagelsmann led RB Leipzig to an impressive 4-0 aggregate win over Tottenham with a 3-0 scoreline at the Red Bull Arena in the second-leg condemning last year’s finalists to elimination.

Simeone masterminded wins over reigning champions Liverpool and put everyone on notice. Atletico won the first leg, 1-0 at the Wanda Metropolitano and followed it up with a last-gasp 3-2 win at Anfield.

The biggest change for RB Leipzig will be the absence of Timo Werner.

The club’s top scorer completed a move to Chelsea and will not take part in any remaining games for RB Leipzig. The German forward scored 34 goals across all competitions for Die Roten Bullen in the 2019-2020 season and his departure has definitely weakened the side.

Doubts also linger over Marcel Sabitzer’s fitness as well as Yussuf Poulsen. The latter suffered ankle ligament damage late in the Bundesliga season and his unavailability will leave Nagelsmann scrambling for quality options up front.

Ibrahima Konate damaged his hip and will be sidelined for the tournament.

For Atletico Madrid, the most notable news on squad availability was Angel Correa and Sime Vrsaljko testing positive for coronavirus at the start of the week. Both players will of course not play any part in this match.

Atletico players and coaches were further tested and thankfully, they all tested negative.

Los Rojiblancos do lose a key player in Correa but Vrsaljko’s absence will not hurt them too much. The Croat was already injured and has not played a major role under Simeone.

Atletico Madrid have struggled to find the net with consistency but their midfield and defense still remain strong.

Saul Niguez had another wonderful season under Simeone’s charge with the Spaniard’s high output on both ends of the field being an asset for the Wanda Metropolitano based outfit.

Saul’s high pressing game, solid work-rate and overall football IQ make him a tough opponent to deal with, especially when he advances into dangerous spaces while attacking.

Nagelsmann will task his primary midfield enforcer Konrad Laimer to keep a close watch on Saul. The Austrian has been impressive at the base of midfield but matching Saul’s engine will be a hard task even for Laimer.

Expect this matchup to be a war of attrition where both will force each other to commit mistakes late in the game.

Former Real Madrid midfielder Marcos Llorente was the hero for Los Rojiblancos in the win at Anfield.

The Spaniard started out as a defensive midfielder but Simeone has repurposed him as an attacking midfielder – a move that has paid dividends.

Llorente has improved a lot this season and his boundless energy makes him a constant threat in the attacking third. His constant pressing can force opposing defenders into making mistakes and Atletico Madrid surely know how to capitalize on such situations.

Versatile German defender Marcel Halstenberg is an integral part of Nagelsmann’s three-man defense. He will have to rely on his physicality and no-nonsense defensive approach in order to counter Llorente’s high effort style.

This game will feature two compact teams so you can expect this matchup to be an old-school slugfest between the two players.

With Werner gone and Poulsen injured, the weight of scoring for RB Leipzig will fall on Patrik Schick’s feet.

The Czech striker, on loan from AS Roma, has already scored 10 times this season. His height makes him a great target for crosses but against a defensively adept side like Atletico Madrid, Schick’s effectiveness will be put to the test.

Werner was a player who could turn half-chances into scoring opportunities against this Atletico Madrid side. Schick, on the other hand, is likely to be nullified by Jose Maria Gimenez.

The Uruguayan defender has endured an injury-ridden campaign but remains a quality option at the back. He is a behemoth while dealing with crosses and is also great at sticking with his man and reducing space for the opposition.

Schick will have to create something special to beat Gimenez and Atletico’s suffocating defense.

Had Werner been part of RB Leipzig, this would have been a harder game to call.

Keeping in mind the squad strength, experience and match fitness, my vote goes to Atletico Madrid to progress to the semi-finals.

Furthermore, in a one-legged game, Atletico’s compact style becomes even more effective as they make it extremely hard for their opponents to win. All it takes is one counter-attack for Los Rojiblancos to take the lead, which they then defend with superhuman effort.

This quarterfinal will not feature slick and flowy football. Instead it will be a game filled with tactical fouls and slow buildup.

All in all, I can see Simeone and Atletico playing out a trademark 1-0 win.