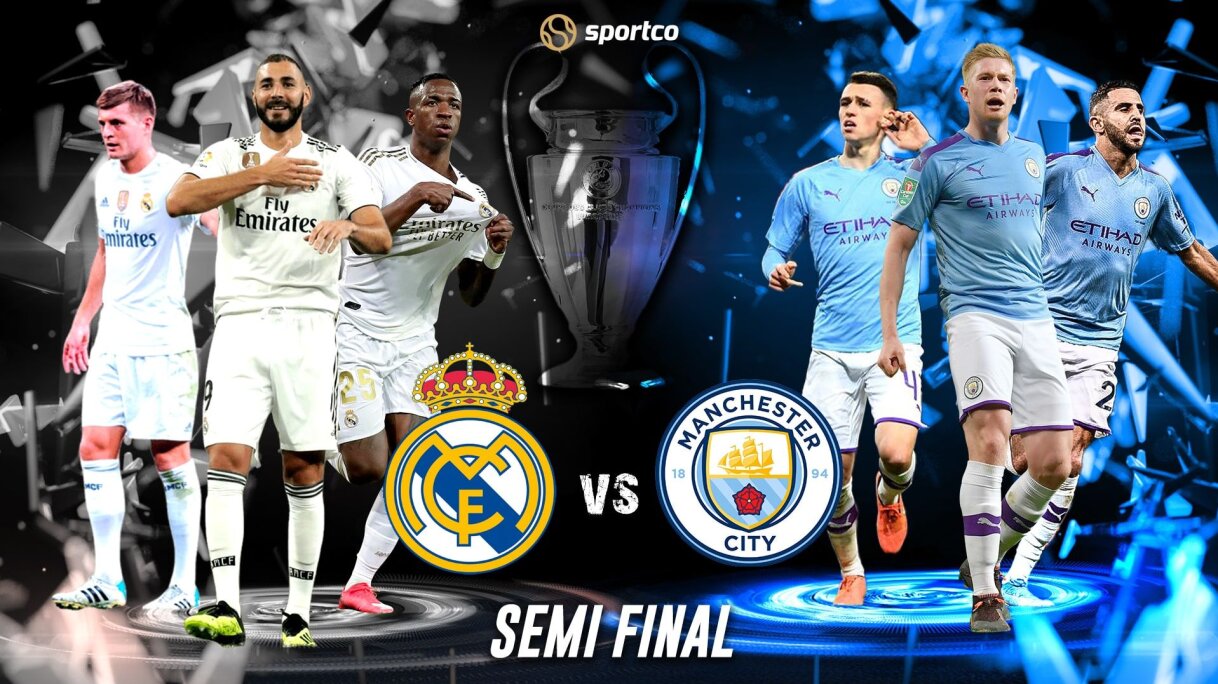 Real Madrid vs Manchester City: The road to the Champions League final!

Real Madrid hosting Manchester City in the second leg of the Champions League semi-final will be a mouth-watering prospect as there is so denying these two giants hold an equal possibility of qualifying for the next round.

Manchester City have a formidable squad who are up for any challenge. If they pass this task at Bernabeu, they will reach their second Champions League final on the trot for the first time in their history, but it’s not always pleasant to be at Bernabeu (ask Chelsea and PSG).

But this City team is an intimidating side who have proved many times and under Pep Guardiola City have not lost against Real Madrid. This tells how far the men in blue have come and on Wednesday, they will fight with pride.

Real Madrid, the most decorated club in Europe, having won the trophy 13-times, is awestruck. They have already conquered their league this season and now set their eyes on Champions League.

The team’s collective work has been exhibited on the pitch, they might be old but the players know how to find infirmity in opponents.

Karim Benzema who rose through the ranks and has delivered in every game, is currently the top scorer in Champions League with 14 goals, and many have tipped Karim Benzema to win the Ballon d’Or.

This will be an epic key battle as both are strong in every aspect; Ruben Dias has great physical and Benzema is good in the air, although not agile but his poacher instinct in front of the goal is to look out for.

The Portuguese is rock solid and can keep attackers at bay with his tackles and physical strength. Dias is a Guardiola marquee player who has been used in every game.

However, Dias will have to be alert as Benzema always creates space in the box and can score from anywhere once he has the ball in the box. Dias will need to keep his man-marking solid and don’t give Benzema an inch of space.

This will be the battle of the fastest player in the pitch as both are agile and wreak havoc with their speed.

Vinicius is pacy and has great dribbling skills. Once he is allowed vast space, he can punish the opponent for this; he is good in tight spaces as well and always looks to make something out of nowhere.

But Walker will be wary of the danger he can cause. Walker is great and always gives tough times to his opposition players. And this time, Guardiola wouldn’t be doubtful as Walker is a great full-back, and Vinicius will have a tough time dealing with the Englishman.

The two team’s main orchestrators will be in the midfield and they both have sensational midfielders on their payroll. De Bruyne, Silva, and Rodri are the finest midfield trio, De Bruyne and Bernardo Silva will provide creativity to their forwards, but on the opposite, other world-class midfielders, Luka Modric, Toni Kroos, and Casemiro, are going to stand in their way.

Casemiro is most likely to face De Bruyne and Bernardo Silva, while Rodri will come up against Modric and Kroos. The Croatian and German are great passers who can split any defense.

Kroos picks up players in wide areas while Modric opens defense of his opponents with his defense piercing through-balls. And Casemiro is strong and aggressive on the ball; he is not shy of breaking the opponent’s play with his tackles.

Manchester City will have their operators, Bernardo Silva and Kevin de Bruyne, will be vying for the open areas in midfield.

The Belgium international picks up players with his timely passes, and he has been more like a goal-scorer this season. De Bruyne’s vision is immaculate, and when he is on the ball, he tends to find players who have a great probability of scoring goals.

While Bernardo Silva likes to dribble, and when the opponent overload, he releases the ball as his teammates are free and gets space to execute the plan, the Portuguese complements De Bruyne well as both form a great dovetail.

Rodri acts as an extra defensive player when De Bruyne and Silva are high up the pitch. Rodri has improved game by game and provides great defensive credentials in the center of the pitch.

The two astute managers will implement their approach to outclass each other on this big occasion. Guardiola’s game revolves around passing the ball around, and Ancelotti’s players flourish during counter-attacks.

Both managers prefer the 4-3-3 formation, but their method is different from each other. But here, we will focus on how they could outclass each other with their tactics.

Guardiola looks to build up the play from the back with numerical superiority in attack and high pressing.

At the same time, Ancelotti was happy to defend deep and hit the City in counter-attacks through their pacy wingers Vinicius and Rodrygo in the first leg. Although Vinicius was successful in doing so while Rodrygo failed to exert his influence and was outclassed.

Man City were much more comfortable on the ball with their positional play as they kept rotating their place and formed a triangle in the left flank with De Bruyne, Foden, and Zinchenko.

Real Madrid found it hard to counter their play, and their rotations were difficult to track as Madrid players were often left exposed.

Kevin De Bruyne was the most effective player as he tended to pick up players in the most dangerous place. Bernardo Silva and Mahrez rotated their position on the right flank, Which Mendy and Alaba couldn’t cope with.

Bernardo Silva would often underlap and keep Madrid defenders occupied, while Mahrez had enough space to cut inside and put up a cross, resulting in the first goal for City.

In the match, Man City were converted to 2-3-2-3 and played between the lines exposing Madrid’s defensive weakness, although if they lost the ball, their press were aggressive to maintain the possession.

The majority of the game, Madrid defended deep and were often exposed, which became a lingering fear for Madrid’s players and their ball carriers were suffocated by City’s midfield and Guardiola’s men got territory in danger zones as they managed to score many goals in the match.

Although being overrun by one of the best teams and still scoring three goals is not a joke. Manchester City managed to exploit Madrid constantly but Real Madrid were able to resist to City’s pressing and it made Real's defence vulnerable as they did not have a destroyer screening the defence.

While Benzema occasionally found himself marked and midfielders were overrun in the centre, and Mendy couldn’t go high up the pitch; this saw Vinicius making more narrow runs as Fernandinho couldn’t match Vinicius’s pace which resulted in a Madrid’s first goal.

Man City’s failure to stay narrow in transition resulted in another goal as Vinicius sprinted from the half-line before poking the ball past Ederson, a flaw in City’s game that changed the rhythm of the match.

Although Kyle Walker or João Cancelo are best suited in these situations as their pace and physical strength are strong enough to thwart players going past them, which is simply not possessed by Fernandinho or Oleksandr Zinchenko.

Los Blanco's majority of the chances came from the bad position of City’s player and their error, and it was punished by the best players in Europe.