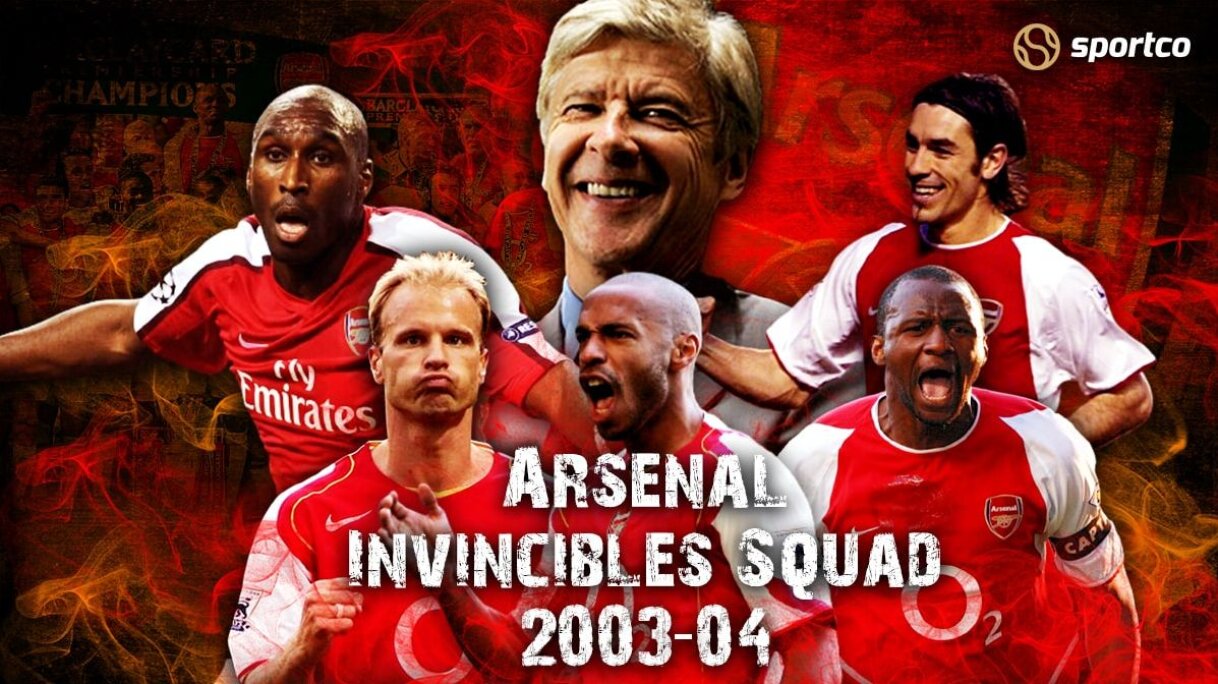 Arsenal Invincibles Squad: Where are they now?

There was a time when no team wanted to face Arsenal as the club became a force to be reckon with under Arsene Wenger.

The club peaked in 2003-04 season when they lifted the Premier League title without losing a single game in the league, which gave them the righful name of the Invincibles.

In this article, we glance through the Arsenal invincibles squad and where they are working currently.

The man between the sticks for the Arsenal invincibles squad, Jens Lehmann, played at Arsenal for two stints (2003-2008 and in 2011). Before joining Arsenal, Lehmann played Borussia Dortmund, and AC Milan. The German goalkeeper retired from professional football in 2011.

Lehmann then became Arsenal's goalkeeping coach in 2017 and stayed at the club for a year. Subsequently, he became Augsburg assistant coach in 2020 and part of the advisory board of Hertha Berlin. However, he was removed from his role in May 2021.

Lauren spent seven years at Arsenal till 2007. The Cameroonian full-back, then moved to Portsmouth in 2007 for a brief spell. He hung his boots from professional football after spending a year at Spanish club, Cordoba.

Lauren is currently the ambassador for Gunners for the African continent.

Ashley Cole was promoted from Arsenal's academy and became their pivotal player. The left-back switched loyalties in 2006 as he joined Arsenal's London rivals, Chelsea, becoming their paramount player spending  the next eight seasons at the Blues.

He also played for Italian side Roma later, he went to La Galaxy in 2019 after spending six months with Derby County, Cole hung his boots. In 2021 Ashley Cole was appointed as the assistant coach of Lee Carsley in the England U21 side.

The English man joined Arsenal from their North London rivals Tottenham in 2001. His five-year stint at Arsenal came to an end in 2006, after which he joined Portsmouth in 2006, and later with Notts County in 2009.

Sol Campbell returned to Arsenal in 2010 and played for a year. Campbell finished his playing career in 2012 at Newcastle United which he had joined a year earlier.

Sol Campbell then became a coach, in 2017, where he joined the Trinidad and Tobago national team as an assistant coach to Dennis Lawrence. His coaching expertise made him Macclesfield Town coach, but In October 2019, Campbell left for League One side Southend United and became their head coach until June 2020.

Kolo Toure spent his football career playing at various clubs; however, most of his playing career came in an Arsenal jersey. At Arsenal, he played for seven years, before moving to Manchester City in 2009.

Later the Ivorian joined merseyside club, Liverpool in 2013 under Brendan Rodgers. He also had a brief stint at Celtic for a year which he joined in 2016. He retired in 2017, which saw him join the coaching staff of the Ivory Coast U23 side.

The Captain of the Arsenal Invincibles Squad, spent nine years at the club from 1996 to 2005. After parting ways with Arsenal, the Frenchman played for many top clubs like Juventus, Inter Milan before calling time to his football career at Manchester City in 2011.

The French midfielder then took over the charge of MLS side New York City FC for two seasons and joined Ligue 1 side Nice as their head coach. Currently, Patrick Vieira works as a manager at Crystal Palace.

Robert Pires was one of the star players of the Arsenal invincibles squad scoring 14 goals from the left midfield during the 2003-04 unbeaten season. The Frenchman had a remarkable six years spell at Arsenal from 2000 to 2006, as he was considered one of the best players in the Premier during the early 2000s.

After leaving the Gunners, he joined Villarreal and then Aston Villa before retiring from football at FC Goa Indian Super League (ISL).

The Gunners legend Freddie Ljungberg played for Arsenal for nine seasons, from 1998 to 2007. He then penned down a new deal with MLS side Chicago Fire and later with Scottish giants Celtic, although he concluded his football career in ISL at Mumbai City FC.

The Swede then tried his hands at coaching, as he became Arsenal's senior and youth team coach for U15 to U23.

He worked as an assistant coach at Wolfsburg before becoming Arsenal interim head coach after the sacking of Unai Emery in 2019. After Mikel Arteta's arrival, the Swedish midfielder rejoined his duty as the club's assistant manager but later left the club in 2019-20 season.

The late Spanish midfielder donned the Arsenal jersey for three seasons from 2004 to 2007, and later played for Spanish giants such as Real Madrid, Atletico Madrid and Sevilla.

He also played for the Chinese club Xinjiang Tianshan Leopard F.C; and joined Diego Capel of Extremadura UD, later returning to Spain in 2019.

Dennis Bergkamp's arrival to the Premier League transformed the style of play. Bergkamp formed a formidable strike partnership with Theirry Henry, leading the line for the gunners, scoring some magical goals (one against Newcastle) in the process.

Most of the Dutchman's playing career was spent at Arsenal. Dennis Bergkamp played for Inter Milan and Ajax before joining Arsenal in 1995, spending 11 years at the club. He retired in 2006 and tried his career in coaching as the assistant manager at Ajax from 2011 to 2017.

The dutchman became a part-time coach on a voluntary basis at Dutch side Almere City.

One of the best foreign imports in the Premier League, Thierry Henry spearheaded the forward line for the Arsenal invincibles squad scoring an impressive 30 goals during their ubeaten season.

The Frenchman donned the Arsenal jersey from 1999 to 2007 and a loan spell in 2012. He eventually retired from professional football in 2014 after spending four seasons in the USA with MLS side New York Redbulls.

Henry then embarked on a managerial career, as he joined the Belgium national team as an assistant coach to Roberto Martinez from 2016 till 2018.

In 2018 he was appointed AS Monaco head coach, but he left for Montreal Impact a year later. However, he rejoined the Belgian as an assistant manager under Roberto Martinez in 2020.

Sylvain Wilford spent four years in Arsenal. Wiltord was an integral part of the Arsenal invincibles squad, scoring some crucial goals for the gunners during his time.

The Frenchman is still remembered for his famous winner at Old Trafford that clinched the Premier League title for Arsenal in the 2001-02 season.

After his spell at Arsenal, he went to France and played for many Ligue 1 sides like Lyon, Rennes, Marseille, Metz and Nantes. He finally hung his boots in 2012.

The French forward then worked at the French reality show Dropped. now he works as a sports consultant.

From academy product to Arsenal's legendary player, Ray Parlour wore the Arsenal jersey for a whopping 12 years and was a part of the Arsenal invincibles squad as well.

After his spell at Arsenal, Ray Parlour played at Middlesbrough and Hull City and then bid farewell to football in 2007.

The english midfielder has now become a TV pundit recently.

The Brazilian joined Arsenal in 2001 and played at the club for four years. Later, the Brazilian played for Valencia and Corinthians after quitting professional football in 2010.

He then rolled in as the Director of Football (DOF) at Corinthians for a brief spell, as he was a part of Carlos Queiroz's coaching staff of the Iran national side which played in the 2014 World Cup.

Edu works as the technical director of the Arsenal senior team.

Gilberto Silva had formed a great partnership with Patrick Vieira in the heart of the Arsenal midfield. The Brazilian was considered as one of unsung heroes for the Arsenal invincibles squad.

G. Silva spent six seasons at Arsenal and went back to Brazilian clubs like Panathinaikos, Gremio and Atletico Mineiro before retiring in 2013.

The Brazilian international then joined Panathinaikos as their technical director in May 2016 but shortly left in December 2016 to open his football consultancy business. He now represents Manchester United midfielder, Fred.

Kanu was one of the famous players of Arsenal; before joining the Gunners, he played in clubs like Ajax and Inter Milan. Kanu played for Arsenal for five years before joining West Bromwich Albion.

He announced his retirement from football after spending the last two seasons of his career at Portsmouth.

Aliadiere Arsenal's stint came to an end in 2007, spending six seasons at the club. He frequently changed the clubs, from Celtic to West Ham United and Wolverhampton on loan. He culminated his football career in 2016 from Ligue 1 side Lorient.

One of senior leaders of the invincibles squad at Arsenal, Martin Keown played as a central defender at Arsenal. His tenure for the Gunners comprised of two spells, one in (1984-1986) and then from (1993-2004). After departing the club, he joined Leicester and later bid farewell to football in 2005.

After retirement, Keown joined the coaching staff of AFC Newbury. Then he coached Oxford University Blues Football Team for a short period in 2007.

Pascal Cygan played for six years at Arsenal from 2002 to 2006. He subsequently moved to Villarreal and then to Cartagena before retiring from football in 2011.

Clichy was one of those players who spent most of his career at Arsenal. He played as a full-back in Arsenal for eight seasons before moving to Manchester City in 2011 but left to join Istanbul Basaksehir and played there for three seasons.

The French full-back is now playing for the Swiss Super League side Servette FC.