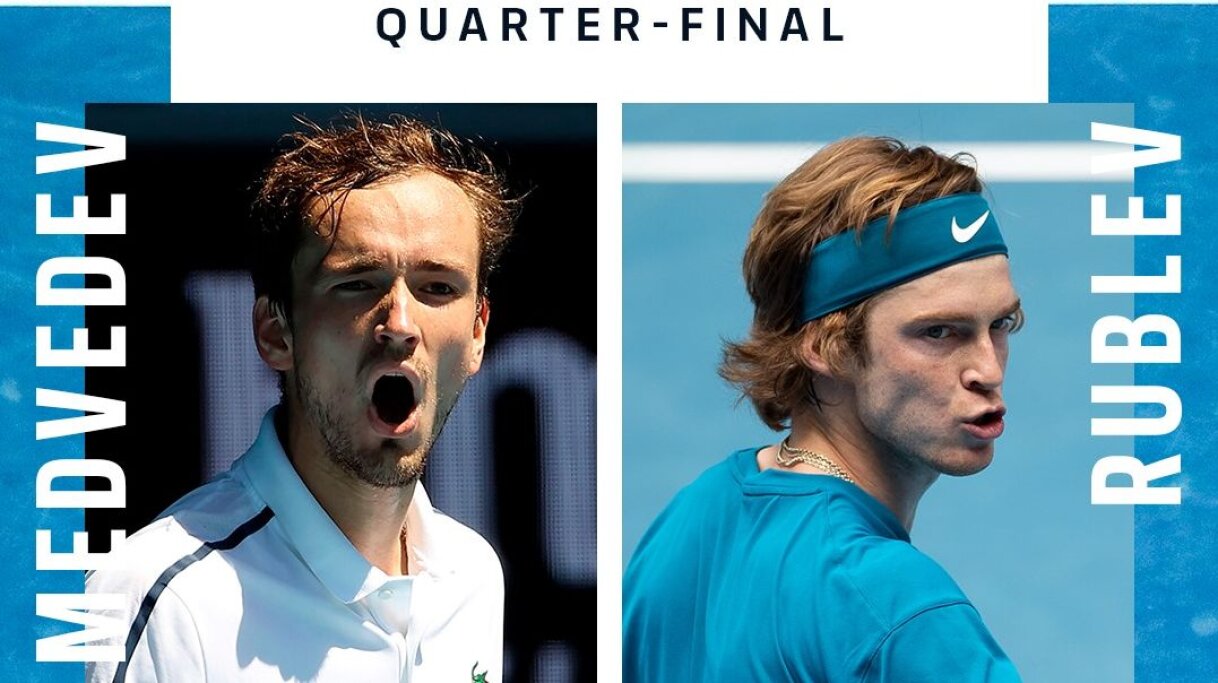 It is an all-Russian clash as 4th seed Daniil Medvedev locks horns against 7th seed Andrey Rublev in the quarterfinals of the Australian Open.

Daniil Medvedev was too good for American Mackenzie McDonald beating him in straight sets (6-4 6-2 6-3) in the fourth round. The Russian smashed 4 aces, won 78% of his first-serve points, fired 29 winners, and also converted 6 out of 7 breakpoint opportunities.

On the other hand, Andrey Rublev was leading 6-2 7-6 (3) against Casper Ruud when Ruud decided to retire hurt with an abdominal injury. It was a clinical performance from the Russian as he hit 4 aces. pounded 22 winners, and claimed 78% of his first-serve points.

Daniil Medvedev leads the head to head record 3-0 against Andrey Rublev. He is yet to lose a set against Rublev having won all his three matches in straight sets against his compatriot.

Medvedev is in red-hot form and is on an 18-match winning streak with 10 wins against the top 10 players of the world. He was tested only in the third-round against Filip Krajinovic due to a left glute injury as he managed to win the encounter in five sets.

Rublev has also been very impressive in Melbourne Park as he is yet to lose a set in the tournament.

The key to Medvedev's success has been his impenetrable defense along with his accurate groundstrokes and the flat backhand that is helping him to dominate the rallies by taking full control from the baseline.

Andrey Rublev has more raw power than Daniil Medvedev and can hit powerful winners off his forehand. His ball-bashing skills and aggressive style of play help him to end most of the points quickly.

Andrey Rublev will have to ensure that his backhand remains consistent against Medvedev's strong return of serve. He was very good in hard courts last year winning two titles each in indoor and outdoor.

Daniil Medvedev is an unstoppable machine when he is on song leaving no chance for his opponents to make any sort of a comeback.

"I am feeling perfect, I am feeling physically great, it is going to be a tough match, I mean, last time he beat me in the quarters in the US Open, now we are again in quarters in the Australian Open, so we will see what’s going to happen, I hope we can show a great fight and great level," said Rublev quite excited ahead of the big match against his countryman.

“It is an exciting moment to be in the quarter-finals in Australia for the first time, that is a great achievement for me, I want more all the time, but step by step, so this is amazing," reflected Medvedev mighty pleased with his performance.

"It is our job of course during the match we are going to try to win, fight for our best, you never know, sometimes you can maybe argue on the court or something because we are competitors, after the match we are great friends," said Daniil Medvedev on his great relationship with Andrey Rublev.

Daniil Medvedev with his unorthodox play can suffocate Andrey Rublev as his varying pace and clever direction of shots can put him in a tricky position. He can also switch effectively between different tactics and adding more topspin to his second serve.

Medvedev has more experience in big matches and can get out of precarious situations strongly. This is the best chance for Rublev to get his maiden win against Medvedev and turn the tide. This cracker of a match will definitely go down to the wire and end with a nailbiting finish.