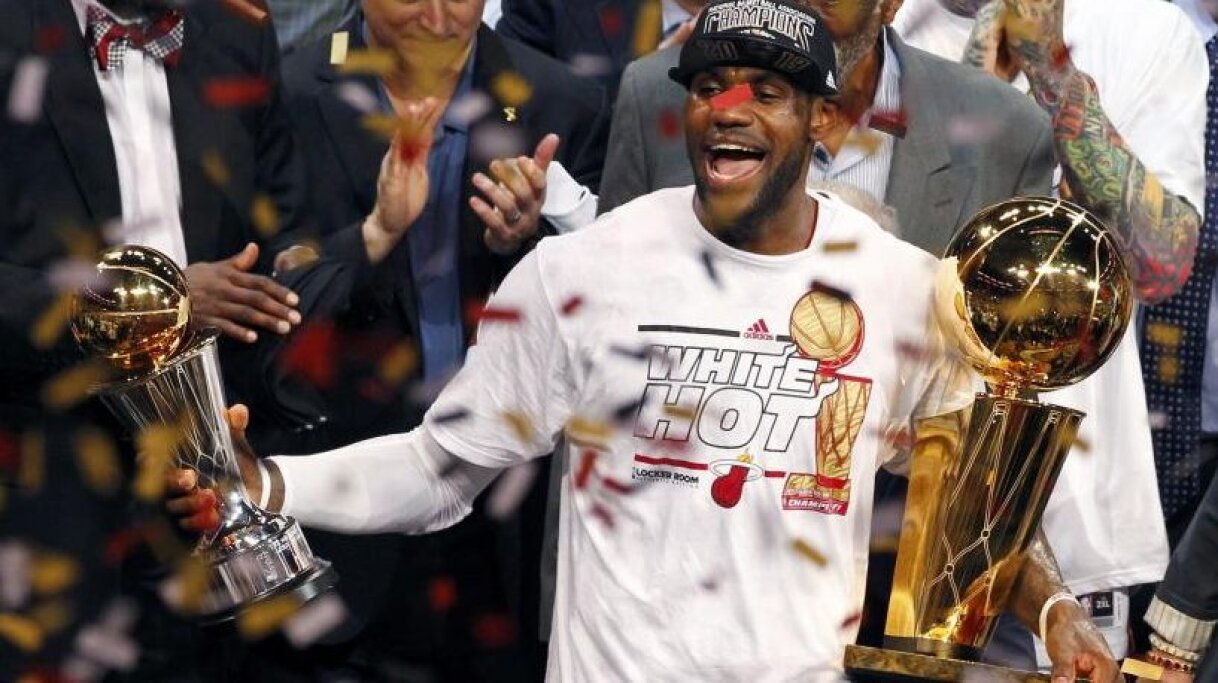 We cannot talk about the NBA GOATs without mentioning LeBron James in the conversation.

James has proven himself to be amongst the all-time greats time and time again. Hence, in this article, we list down the top 5 best moments in the career of LeBron James.

The longevity of the man alone is one of his best accomplishments, going strong in the 19th season of his NBA career, not many see double-digit years in the NBA let alone being on top for almost 2 decades.

After 4 championships and 4 MVPs, there are numerous moments in the NBA that we could write about but here we will be mentioning 5 of the best moments in LeBron’s career, according to our research.

LeBron James left no doubt about his greatness ever since his rookie season, the only thing that lacked was the great Larry O’Brien Trophy. James was unable to win a championship for the first half of his career, where he played for the Cleveland Cavaliers.

After multiple years of failure to win the championship, James decided to join the Miami Heats in 2010.

It would form one of the first “superteams” in the NBA as his teammates would include Dwyane Wade and Chris Bosh. Having 3 All Stars in the starting lineup wasn’t so common in the NBA but it was the start of an era.

This team would put an end to LeBron James’ drought of not winning the NBA Championship. As they would go on to win 2 back-to-back Championships in 2012 and 2013, LeBron would also be named as the Finals MVP in both games.

Becoming the Rookie of the Year wasn’t enough for the Kid from Akron, so he went on to win the League’s Most Valuable Player Award after only 6 years into the league. What is 1 League MVP to an All Time great? Almost Nothing.

LeBron would win another MVP the next year, but this wouldn’t be his last either as he would go on winning back-to-back MVP Awards once again in 2012, 2013. The last two would be special as they came in the years, he won his first two Championships.

During the 2015 finals against The Golden State Warriors, LeBron James carried the whole Cleveland Cavaliers. Kyrie Irving and Kevin Love were injured right when the finals started, this left Cleveland and James in a tough spot.

Eventually, the Cavaliers would lose against Steph Curry and the Golden State Warriors but LeBron’s performance was one for the history books.

Over 6 games, LeBron James averaged 35.8 points, 13.3 rebounds, and 8.8 assists. With this performance, he should’ve been given the Finals MVP regardless of the loss, but it was given to Andre Iguodala. It was still one of the greatest NBA Finals performances of all time.

2. Winning the Championships after joining the Los Angeles Lakers

LeBron James completed his work in Cleveland Cavaliers and decided that it was time to move on. What better destination than the Los Angeles Lakers, one of the greatest NBA franchises of all time. He would team up with Anthony Davis.

After returning to the Lakers, LeBron James would instantly turn it into a championship team with the help of Anthony Davis.

He would then go on to win the NBA Championship in his first season ever as a Laker, this would also serve as a huge tribute to the Late Kobe Bryant, one of the All-Time great, who had passed away earlier that year. Definitely one of LeBron James' best moments of his career.

1. Returning to Cleveland and doing the impossible

James was hated by the Cavaliers fans after he left the team without winning the Championship. After winning his first couple of Championships, James decided it was time to return to his first team.

After returning to the Cavaliers, LeBron James would instantly make them favourites in the Eastern Conference. They would head to the Finals in his first season, but they would lose against the Golden State Warriors.

The next season, LeBron would once again go up against Steph Curry and company, only this time they were facing a team that held the record of 73-9, the greatest in NBA History.

Cavaliers would go down 3-1 in the first four games. No team has ever returned from a 3-1 deficit in the finals but neither did they have LeBron James by their side.

James and the Cavaliers would do the impossible and make a comeback from 1-3 to 4-3, as they would win the NBA Championship. With this incredible feat, LeBron was finally able to deliver a championship to his hometown.

Do you agree with our list? Which out of these has been your best LeBron James moments?