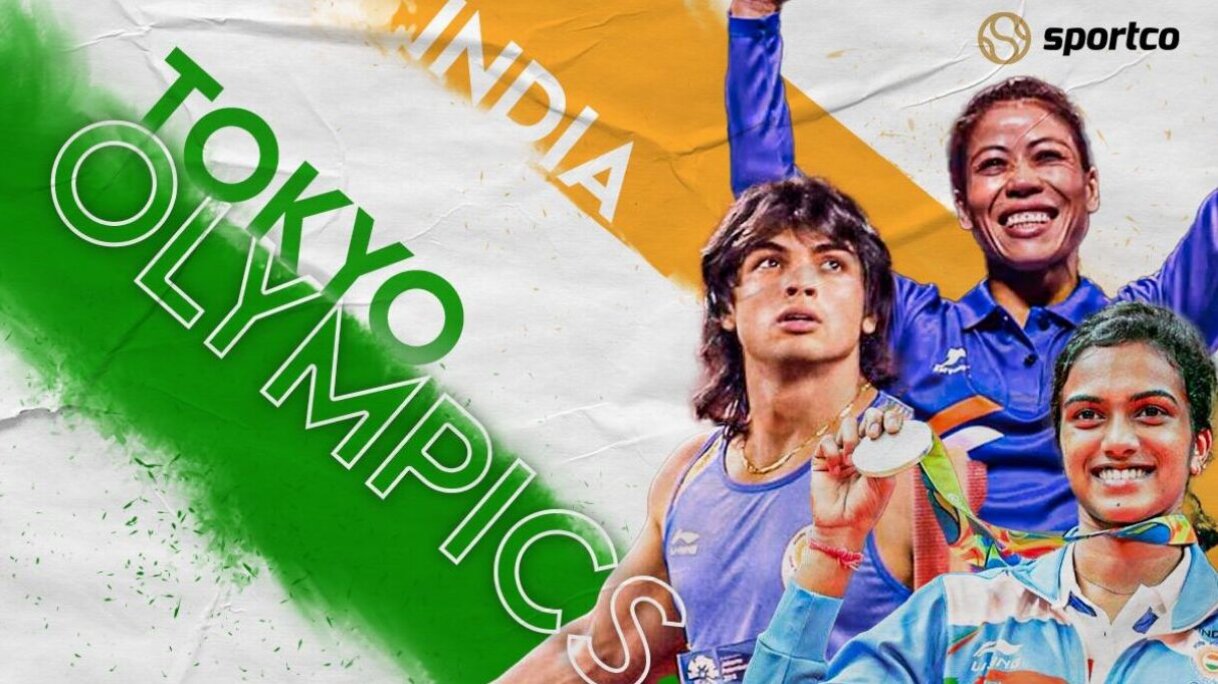 206 Nations, 339 events, 33 sports, and more than 11,000 participants, the grandest Global sporting event is now just a few days off. The 2021 Summer Olympics Tokyo will mark the second time for Japan as the host for the grand event.

With over 200 nations taking part, Sportco takes a look at Indian Contingent for the Tokyo Olympics 2021 and their chances at striking gold.

Performance at the Previous Olympics

India had a rather quiet outing in the 2016 Rio Olympics as they were left with just two medals, a silver, and bronze. The last time the Indian Contingent managed to win gold was back in the 2008 Beijing Olympics when Abhinav Bindra gave his best at the Men's 10m air rifle.

Their highest medal tally to date stands to be 6, 2 silvers, and 4 bronze, which was achieved at the 2012 Summer Olympics. Can the Indians put up a stronger show this edition and better their overall tally?

The Indian contingent will feature 124 competitors taking part in 18 different sports at the 2021 Tokyo Olympics and this will also mark the biggest contingent ever sent to the Olympics by India.

India’s medal relies heavily on the Archery team as the World no.1 Deepika Kumari would be eyeing her first-ever Gold medal at the Olympics. The combo of Atanu Das and Deepika Kumari is also expected to be an enriching venture.

The Indian Contingent for Athletics is set to feature a total of 17 competitors spread across 14 events at the Tokyo Olympics 2021.

The onus will be on the 23-year old record holder Neeraj Chopra in the Men’s Javelin throw as he holds the Indian record for the longest throw in this event and also his reputation of being the first Indian to win a U-20 event at the Track and field event makes him the hot favorite in the Athletics department.

A field where Indians have excelled over the years and this time too the Nation has not shied away from featuring their star players.

The event will see the most celebrated Indian women boxer Mary Kom, as she will be bidding for her second Olympic medal this time around. What better way to hang her boots by claiming gold?

The sports will feature 9 Indian boxers, 5 men, and 4 women.

Another event where the Indians have stepped up and with the likes of World champion PV Sindhu and World no.13 Sai Praneeth set to represent India, the chances of India bagging a few medals in this sport looks bright indeed.

The Indian contingent at the 2021 Tokyo Olympics for Badminton will comprise 4 badminton players for the 3 events subsequently and will be missing out on the Women’s doubles and mixed doubles.

For the first time ever India will feature a fencer at the Olympic games. The 27-year old Bhavani Devi is the only Indian to win a gold medal at the Senior Commonwealth Fencing Championships held in Canberra. With 37 points to her name, she is ranked No. 42 in the World.

After a long gap of 20 years, the Indian contingent features a competitor in Equestrian at the 2021 Olympics, in the form of Fouaad Mirza. The 29-year old year came into the spotlight when he managed to become the first Indian since 1982 to win a medal at an individual event at a sport in the Asian Games.

There will be no Indians taking part in the singles events of the sport but will feature veteran star Sania Mirza team up with the upcoming Indian sensation Ankita Raina for the Women’s doubles.

The pair will be tagging up for the first time and the experience of Mirza combined with the pace of Raina might work wonders for the Nation.

Key stat: Saina Mirza will become the only female athlete to represent India in 4 Olympic games.

A strong line-up has been assigned for both the Men’s and Women’s divisions. The Men’s side did show great form by defeating Russia and they will be hoping they can continue the form and convert it to valuable metals.

The 26-year old Pranati Nayak will represent India in artistic gymnastics. She won the bronze medal at the 2019 Asain games held at Ulaanbaatar and managed to qualify for the Tokyo games after managing to secure a place in the last two available spots owing to the cancellation of the 2021 Asian Championships.

Six Indians will enter the water sports featured in the Rowing and Sailing events. Arjun Lal and Arvind Singh will represent the Men’s lightweight double sculls. While, in the sailing division, 4 competitors spread over 3 events.

Saikhom Mirabai Chanu, who represented India at the 2016 Rio Olympics, once again managed to continue her great run and qualify for the Tokyo games by finishing in an impressive second spot out of the 8 highest ranked.

The 2017 World champion is a player to look out for in this Olympics as she has showcased some tremendous performances over the last couple of years which included her record-breaking feat of 119kg at the Asian Weightlifting Championships in Tashkent.

Seven Indian wrestlers have managed to qualify for the Global event after rigorous stages of qualifications.

Wrestling stands be a sport where the Indian contingent has excelled at the grand stage and the onus will be on Vinesh Phogat and Bajrang Punia to contribute to the medal tally at the Olympics 2021.

Three Indian swimmers will enter the 2020 Summer Olympics in Tokyo, featuring 21-year old Maana Patel, who received her entry through the University quota. She will represent India in the Women’s 100m backstrokes.

While Srihari Nataraj and Sajan Prakash will feature in the Men’s 100 m backstroke and Men’s 200 m butterfly respectively.

Four players will be part of the Indian Contingent for Table tennis at the 2021 Tokyo Olympics, which will also include the nine times Senior National champion Sharath Kamal Achanta. India will not be taking part in the Men’s doubles and Women’s doubles events.

The 26-year old Shushila Likmabam is the only Judoka, who will be representing the Indian contingent at the 2021 Olympics this time around.

She is set to take part in the 48 kg division. Her best performance came in the 2014 Commonwealth games held at Glasgow, where she finished with a silver.

A star-studded line-up is set to represent India at the shooting events, which are set to begin on the 24th of July. With as many as 16 stat shooters from India taking part, the medal prospects for India in shooting look very promising.

Can the Indian contingent create history at the shooting events at the 2021 Olympics? Do make sure to catch the stars live from the 24th of July.

With the Indian Olympic Committee sending their biggest contingent for the 2021 Olympics to date, will team India witness the best ever Olympic performance?

Do stay tuned with Sportco as we bring you more exciting news and content related to the upcoming 2020 Summer Olympics Tokyo. Also, do comment on who is your favorite Indian athlete.